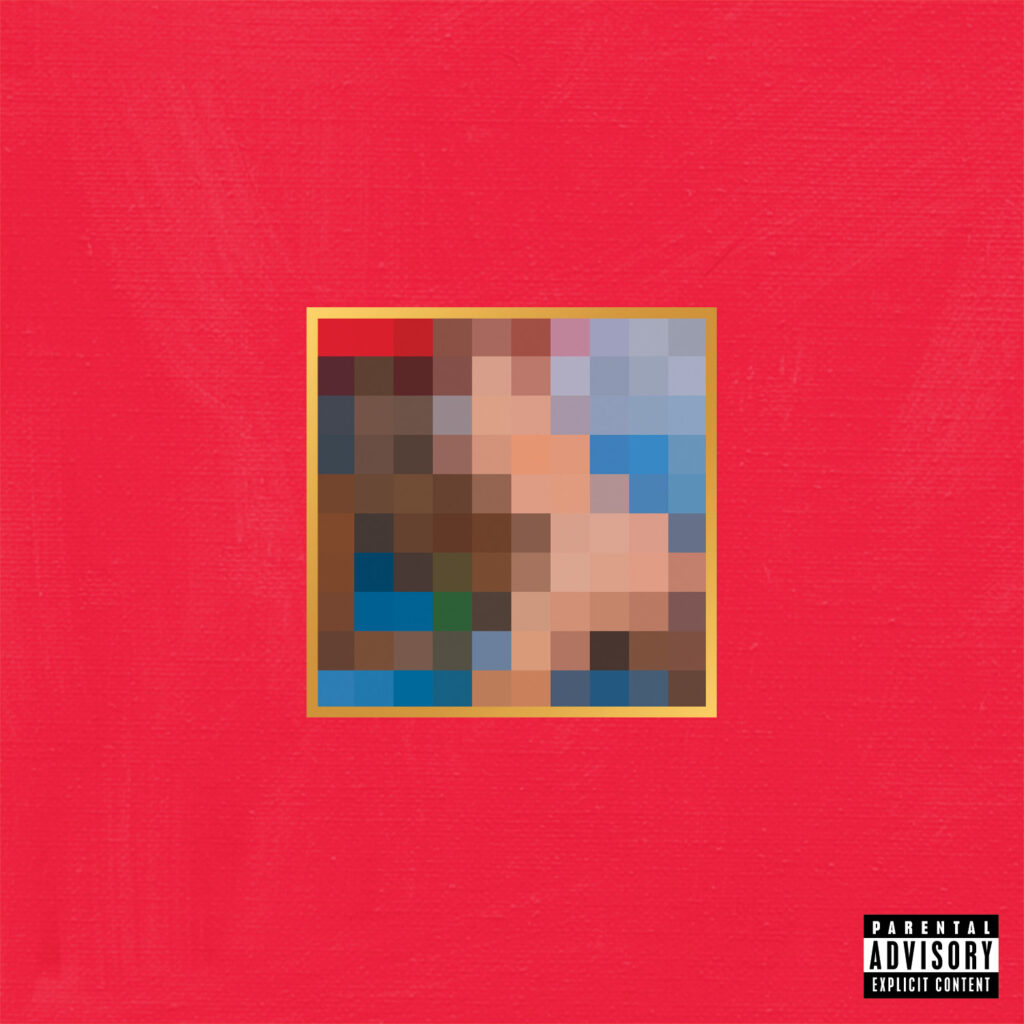 It’s been a decade since My Beautiful Dark Twisted Fantasy graced pop culture with its presence – the record that is still considered by many to be Kanye West’s magnum opus. Back then, in the good ol’ days of 2010, it was Kanye’s big moment of redemption. The solidification of his place at the top of modern hip-hop’s (and really, music’s) pantheon. Even ten years later, it still frequently turns up in commentaries, mentions, and references in any internet music circle as the be-all and end-all of hip-hop albums. And whilst the exact context of Kanye’s life, and therefore, the PR narrative around the record at the time of its release may have faded into the background, the album still stands on its own completely as a piece of incredibly ambitious music.

It’s impossible to talk about the album’s release within the context of its time without talking about the 2009 VMAs. For those that somehow missed out on one of the most infamous pop culture moments since the turn of the millennium – Kanye walked on stage mid-show, uninvited and unannounced, interrupting Taylor Swift as she was about to give her acceptance speech after winning Video of the Year, to tell the world that Beyoncé had “one of the best music videos of all time!!”, in reference to ‘Single Ladies (Put A Ring On It)’. What ensued was outrage on a mass scale. The notorious evening that caused a media storm of such magnitude that even then-president Barack Obama casually chimed-in, affectionately calling West a “jackass”.

What allegedly followed in the fabled story that is the making of My Beautiful Dark Twisted Fantasy, was Mos Def telling Kanye to leave the country, and our anti-hero going into more or less indefinite ex-pat status, moving to Japan and then settling in Rome for a while, to escape the media frenzy. Even telling everyone that he was putting music behind him and focusing on different artistic pursuits, such as fashion. A true second act in any great feature film.

Of course, this mind-set wouldn’t last. And in true Kanye fashion, his post- the sombre 808s & Heartbreak and post- the controversy of VMAs return was to be on a truly epic scale. Indefinitely renting out a studio in Honolulu, Hawaii, West flew out a veritable who’s who of hip-hop (and not only) legends to work on what was going to become My Beautiful Dark Twisted Fantasy. The sessions allegedly were music boot camp for all those involved. Complex’s editor-in-chief Noah Callahan-Bever, who got the privilege of flying out there himself to get a look at the process for a few days (and wrote a report well worth checking out here) detailed a regiment of breakfast, basketball, and then more or less music 24/7. The studio decked out in the usual Kanye signs of “All laptops on mute”, “No blogging”, “No negative blog viewing”, “Just shut the fuck up sometimes”, and others. Engineers in suits. A non-stop creative work force of the greats. Almost sounds too good to be true.

Typing out who exactly ended up contributing what on the record feels like playing hip-hop bingo, for the most part. Besides Kanye himself there’s Jay-Z, SZA, Rick Ross, Pusha T, Kid Cudi, etc. It’s like an individualistic, egotistical, and incredibly fun version of ‘We Are The World’. The grandiose marcher ‘All Of The Lights’ somehow crams in so many triple-A performers – Rihanna, Elton John, Alicia Keys, John Legend, Fergie, the list goes on – that you can’t even perceive some of their voices in the final mix of the record. Additionally, Justin Vernon of Bon Iver contributes bits and pieces throughout the run-time of the record – most memorably, the leading sample and vocal performance to the penultimate track and one of the highlights of the album, ‘Lost In The Woods’.

To truly make his grand return and statement to the world of music and pop culture though, the songs themselves, as well as the people performing them, had to be larger than life. Kanye talked about his songwriting process for the album as “giving people exactly what they want”. Opener ‘Dark Fantasy’ introduces us to the record by having Nikki Minaj effectively read us a bed time story, snarling “Well, gather ’round children, zip it, listen”, amongst a background of grandiose, gospel-like chorus of vocals. And things only increase in grandeur and intensity from there. A truly maximalist album if there ever was one. Singles like ‘POWER’, ‘Monster’ and ‘Runaway’ have since attained iconic status. The album saw Kanye ambitiously expand his sonic palette so far beyond what was expected after 808s & Heartbreak, and of a hip-hop record in general, that everyone had to coordinate being floored upon hearing it for the first time. Pitchfork infamously gave it a perfect 10 upon release, a title which the record singularly held until Fiona Apple’s Fetch The Bolt Cutters this year.

Nearly every musical genre is referenced or touched upon, at least in some way, on this monstrosity. Samples from old jazz standards and obscurities sit beside King Crimson samples and Black Sabbath references. Nikki Minaj verses beside Elton John playing piano. There’s a literal lion roar sampled on ‘Monster’ and the beats are unrelenting. ‘Runaway’ ends on a three-minute Auto-Tune vocal solo from Kanye, new analysis of which I still come across to this day. Kanye also honed his lyricism on the record. Not that Kanye’s selling point was ever his wordsmithing ability, but My Beautiful Dark Twisted Fantasy might still objectively be the highlight of his career, at least as far as traditional rapping is concerned. The album gave us gems like ‘So Appalled’, where West somehow does not get completely outshined by contributing verses from Jay-Z and Pusha T, instead dropping absolute gems in that true Kanye humour like “That was a little joke – voila / Praises due to the most-high – Allah / Praises due to the most fly – Prada / Baby I’m magic – Ta-Da”.

Kanye’s verses and trademark off-pitch yet somehow overtly confident delivery keeps the record firmly grounded as Kanye West’s, despite the many guest-list appearances. There are verses where he’s talking about his own creative inner turmoil, such as on the aforementioned ‘POWER’: “I just needed time along with my own thoughts / Got treasures in my mind but couldn’t open up my own vault”. And then there are parts like ‘Blame Game’, a track that’s tasteless to the point of hilarity which unfolds over an uncharacteristically sad Aphex Twin sample from ‘Avril 14th’ and ends on a Chris Rock monologue so cringe-inducing and misogynistic, that by end of the lengthy ordeal you can’t help but laugh from sheer shock value.

Kanye teased the release of the record by dropping free singles through his label G.O.O.D. Music, some of which, like ‘Christian Dior Denim Flow’, didn’t even end up being on the final cut of the album, yet still slap harder than some rapper’s entire careers. A testament to the creative force Kanye West had assembled for the project. Upon release, My Beautiful Dark Twisted Fantasy generated so much good press for West that it went above and beyond expectations for his redemption arc. It got praise as high as “better than Thriller”, by some radio shows. The goodwill this record generated on its own, and, in all honesty, is sustained even a decade after it was first released, has seen Kanye through most of his work after it, with every critic and music fan holding their breath for Kanye’s newest release pretty much until 2016’s The Life Of Pablo, even through many delays and typical weird media outbursts.

Perhaps, there is no better testament to the influence and status this record came to hold than the sheer fact that even as Kanye as we knew him disappeared further and further into whatever mental spiral and paranoid frustrations he has now, some people are still genuinely convinced that he’s the de facto genius of the music industry, and are still anxiously awaiting a new, grandiose Kanye release to blow everything out of the water. Even if their numbers dwindle with every ridiculous presidential candidacy. My Beautiful Dark Twisted Fantasy is the epitome of multiple people at their prime coming together to somehow stitch together this Frankenstein’s monster of talents, styles, and arrangements. Canonically so good that, a decade later, the public is still not over it. Pushing the ideas of what a hip-hop album can be so far that you’d struggle to find any up and coming hip-hop artist now that wouldn’t at least partially name it as an influence. So good that even Kanye himself cannot fuck up the reputation he himself built for the record.

Listen to My Beautiful Dark Twisted Fantasy by Kanye West here via Spotify, and tell us what you think below!