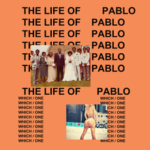 Front cover of ‘The Life Of Pablo’

When the most divisive man on the planet announced he was going to be releasing a seventh studio album in 2013, a mere five months after the release of the almost-experimental Yeezus, many heads were turned. Now two and a half years and no fewer than three title changes later, The Life Of Pablo has finally arrived and the media storm with it. Part of Kanye West’s brilliance is his ability to remain true to his egotistical self and, in doing so, keeping the media in the palm of his hands. So far in the media circus we’ve had lyrical outrages, BRIT awards controversy, many Twitter meltdowns and farces… did I mention the amount of name changes on this album? Right up until 4 days before release…

Anyway, despite the catastrophically judged rollout via Tidal, which is said to have already cost Kanye $10 million, and the very real possibility of complete public meltdown, none of that matters, as for all of the ‘GOOD FRIDAYS’ and ‘Yeezy seasons’, one thing always remains true – Kanye West will release a great album at the end of it all. From the early work of the ‘education’ series to the 2010 masterpiece My Beautiful Dark Twisted Fantasy, Kanye is consistently great and when you combine every aspect of his character it is no surprise that The Life Of Pablo, in spite of the terrible name, is the most anticipated album of the year.  And it’s an album that will, in classic Kanye style, be opinion splitting; what makes it interesting is that it’s the first album in a long time that hasn’t re-invented who Kanye West is as an artist.

The Life Of Pablo’s originality comes from the fact it combines everything thus far that has made Kanye brilliant into one record; we have the original production of My Beautiful Dark Twisted Fantasy with the amount of ideas of Yeezus and the lyrical delivery of Graduation. By doing this Kanye has created an album completely in a league of its own – and not just for his assertion that it will never be available for sale.

The album you may never own begins with the excellent ‘Ultralight Beam’, a track with minimal beats but that’s pushed through to greatness by the excellent gospel vocals of Kirk Franklin. In January, West proclaimed this album as his gospel record and, while that may not be 100% true, it does have more elements of gospel than his previous. ‘Ultralight Beam’ feels like the perfect statement to begin the record; Chance The Rapper delivers an excellent verse to close the track and with it usher in the Pablo era.

The album continues along a gospel theme with a Pastor T.L. Barrett sample in ‘Father Stretch My Hands pt.1’ before Kanye refers back to ‘New Slaves’ from Yeezus by proclaiming he “just want to be liberated”. That’s not to say that all of Kanye’s lyrics are good: the lyrics: “Now if I fuck this model / And she just bleached her asshole / And I get bleach on my T-shirt / I’mma feel like an asshole” are an early contender for worst lyrics of the year. But the Kid Cudi verse is more than enough to carry the track through to its end. The opening two tracks serve as a reminder for everything that is good and bad about Kanye; there are moments of opulent brilliance in the production and vocal deliveries, but at times Kanye is left searching for the lyrical power he had when he emerged on the rap scene, some 11 years ago.

‘Famous’ is another example of this; Kanye goes out to get a reaction in his music and he gets it. The lyrics: “I feel like me and Taylor might still have sex / Why? I made that bitch famous” are outrages and bring a smile to people who realise that Kanye is trying to provoke a reaction. But you get the impression that Kanye at times doesn’t try to appeal to his fans, that he would rather garner a reaction in whatever way possible and in this case it saw him be indirectly referenced on the biggest night of the music year at the Grammys when TayTay referred to Kanye. One gets the feeling that Kanye wants absolute control of everything, to bring people in and yet make them totally subservient to his vision, and he isn’t willing to stop at anything to push boundaries and get people talking.

‘Famous’ is one of those songs only Kanye would attempt: after more brilliant production and one of Rihanna’s better vocal features, the song is turned on its head by the sampling of Sister Nancy’s ‘Bam Bam’. It comes out of nowhere and changes the song from its sparse production to getting people to the dancefloor, and the rapping by Kanye is delivered brilliantly also. ‘Famous’ has no right to work, but in the hands of Kanye, it defies logic.

The Life Of Pablo is at its best when it is kept minimal production wise, the excellent piercing production of ‘Feedback’ working brilliantly. This is also the case on ‘FML’, during which Kanye internalises his life as he tells the listener “I been living my living without limits / As far as my business / I’m the only one that’s in control”. ‘FML’ (which in this case stands for ‘For My Lady’) is one of those records which serves as insight into the hectic life of Kanye West and proves an intriguing listen; we find out about Kanye’s fears he won’t be able to stay true to Kim Kardashian while speaking of his love for her.

But for all of the serious issues discussed on the record there remains a tongue in cheek humour throughout. ‘I Love Kanye’ is a hilarious song written satirically from a fan’s viewpoint as they beg for Kanye to return to the days of old. Kanye rightly points out that it is stupid to return to the days of old and “pink polos” and that it is instead better for people to look at his music now and realise it works.

The Kanye of the modern day is a Kanye that is willing to take risks, and more often than not they pay off. ‘30 Hours’ features experimental production to begin before an excellent pop beat takes over and provides one of the album highlights and also one if its oddest moments as Kanye receives a phonecall from Def Jam executive Gabe Tesoriero – from the sublime to the ridiculous, but by this point, would you have it any other way?

‘No More Parties In L.A.’ (a track which wasn’t on the original tracklisting for Waves as the album was known until a fortnight ago), is a fantastic track which uses retro samples to add a sense of occasion. The occasion in this case is the featuring of Kendrick Lamar, and in doing so provides a collaboration as jaw-dropping as you’d expect when leaving two of the greatest modern day rappers to do what they do best.

The album ends on a high as ‘Fade’ provides one the more accessible moments on the record. This is mainly due to how good West is at choosing his samples, in this case a track from The Temptations’ ‘I Know I’m Losing You’, which provides a brilliant bass guitar line before the song  ends with Rare Earth telling us “I feel it, it’s fading”. And that’s it another Kanye album to the connection.

In previous records Kanye West has ushered in his own new era and has inspired a new generation of artists. Even at his least brilliant, in 808s & Heartbreak he paved the way for artists like Childish Gambino to make it big. And although The Life Of Pablo does nothing new and in doing so is new, paradoxically feeling like the culmination of everything Kanye and yet playing a lot of it straight down the middle; more successful in its attempts at being experimental than Yeezus, cleverer than Late Registration. It will inevitably divide people, but this is by design, and will attract criticism from people who don’t like Kanye despite not realising just how talented the man is. Fundamentally The Life Of Pablo is another great record that does justice to his past, and that’s about as big of a compliment as one can give. (8/10)

Have you heard The Life Of Pablo yet? If so, tell us what you think below!