REVIEW: DIIV – ‘Is The Is Are’ (Captured Tracks) 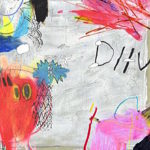 It’s been a frustratingly long wait for DIIV’s follow-up album to their 2012 debut Oshin. In the time that has passed a lot has happened to the quintet, inclusive of but not limited to drug busts, addiction and rehab cycles and multiple failed recording sessions. It seems that lead singer Zachary Cole Smith’s heroin addiction is replicating that of his musical hero, Kurt Cobain. The combination of these factors has led to a troublesome period for the band pockmarked by inactivity. DIIV have at least tried to make amends with the release of Is The Is Are, posited as a double album, and which lasts just over an hour. With over 300 tracks written throughout the rough period, Smith whittled these down to 17 narcotic-influenced psychedelic pop singles.

However, if you were hoping that it might turn into some Titus Andronicus-style rock opera classic, you’ll be disappointed, as quantity triumphs over quality. Album opener, ‘Out Of Mind’, heads into Real Estate territory with reverbed guitars, whilst ‘Under The Sun’ is the main stand-out single from the album. The track has hints of Echo & The Bunnymen and The Cure’s Robert Smith, with swooping guitar hooks and motorik drum beats. Similarly, ‘Valentine’ has a heavy shoegaze approach with reverberated, spiralling guitar hooks backed by a synth soundscape. Cole Smith’s girlfriend, Sky Ferreira, features on ‘Blue Boredom’ which works as an interesting interlude from his lead vocals.

Hidden behind the melodic, sun-drenched hits is an element of darkness, which likely stems from the band’s uncertain future after the first record. Tracks such as ‘Dopamine’ and ‘Take Your Time’ are patently autobiographical and show a maturity to Smith’s songwriting ability. But at 17 tracks long it feels like a single, streamlined album of 10 tracks would have sufficed, coming over as too much like a brain dump with little thought to editing, pacing and quality control. Like the band’s extra-curricular activities, everything is done to excess and a little overindulgent and reliant on one particular style, with the notable caveat of, ‘Under The Sun’, an early frontrunner for best track of 2016. (5/10)

Listen to Is The Is Are here, and tell us what you think below!