What is it about Leeds that makes it so appealing to young music fans, and for new students?

It’s a big city, it’s a nice city, and while it may not have the musical history of somewhere like Liverpool, Manchester or even Sheffield, there’s great places in Leeds like the Brudenell Social Club, putting up dozens of bands who absolutely love playing there. We’ve now got an Arena for the big names, which has made an awful lot of difference to the city in the last few years. 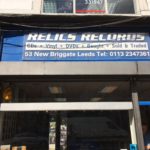 Do you think it’s students that have been central to the vinyl revival?

Definitely, it’s spread like wildfire through the student population. My son is a 20 year old student in Leeds, he’s had a house full of records all his life, but it was only a year or two ago that he decided he wanted a record player and some records. He’s not got that desire from me, it’s from other people at university.

Around five to seven years ago, I noticed younger folks, for want of a better term, coming in and buying records, and quite a lot of them didn’t even have a player, but they just felt like they wanted to have a piece of that. Bands like Nirvana and Green Day were what they tended to be after, but they just wanted that physical sensation. They might have been putting them on their walls, but they didn’t have a player! I think that was the seed of this current boom developing.

When I was 16/17 years old, you would come into Leeds on a Saturday, buy a couple of records, and meet up with your mates and everyone would want to know what was in the bag – “what have you bought?” – that doesn’t exist with downloads

What does Relics do that the other stores don’t?

Jumbo and Crash, for example, are predominantly stocking new records. We stock a small amount of new material, mainly nice re-issues or box sets, or sometimes just things we think are interesting, or titles that people ask us for, but more than 90% of what we do is second-hand. We’ve been here longer than any other of the second-hand stores that have opened, and when everybody was getting rid of their records and buying CDs, we were buying up their old records.

We just always liked records, everyone who works at this shop and quite a few people I know never stopped buying them, it never really went away. What has changed is young people buying things that we never used to be able to sell. Not saying ‘rubbish records’, but bands that were taken for granted. Dire Straits is a good example – they were often considered a joke of a band in many circles, but suddenly 16 years olds, boys and girls, started buying them up. Fleetwood Mac’s Rumours is another great example, we get at least a copy a week and it sells instantly.

Does Relics get involved with Record Store Day?

Relics doesn’t get involved with it because it’s really Crash and Jumbo’s territory – we could if we really wanted to, get some bits of it on board, maybe take on the more obscure releases that don’t necessarily sell so well as that’s what we’d rather do, but it’s not our business model.