What is it about Leeds that makes it such an appealing student city, for young music fans?

I think it’s because Leeds has always had a really healthy music scene. In the ‘70s it had an art-rock, art-punk scene, with The Mekons and Gang Of Four, and that held over to attract students which then fuelled the goth scene and that’s just kept rolling. It’s not necessarily the biggest scenes that have been born in Leeds, but many have been very influential, and that hangs over for new generations. I was always into punk music, but there’s always been a healthy metal scene, and I imagine it’s the same for fans of many other genres like reggae over in Chapeltown. I think with so many students in one place it’s inevitable that like-minded people will meet, listen to music together and form bands. 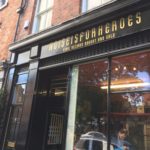 Who is driving the vinyl revival, do you feel? Is it students, or some other demographic?

I think musicians drove the revival originally, but most importantly it was influential musicians. When someone like Jack White says ‘I buy records, I’ve always bought them’, people pay attention. But those kinds of people, like I say, most of them musicians, just never really stopped buying them in the first place. It was certainly very niche, however, and the re-birth of new releases coming on vinyl certainly came with the independent labels, primarily the larger ones such as 4AD or Domino or Bella Union, who found that their vinyl sales were increasing at the same time as their CD sales were going down. Eventually, the innovation of including a download code with a vinyl album seemed to really swing things and make it attractive for major labels.

There’s also the media aspect of it and how stories grow. If The Guardian runs a feature on the ‘vinyl revival’, that filters down and eventually local papers start writing stories on it, and that inspires people to buy records, either for the first time in their lives or just resuming an old habit.

This academic year is the first year you’ll have been open for, so what is it about NoiseIsForHeroes for young record collectors that you would emphasise?

There’s a lot of potential footfall here, a little bit off the beaten track and slightly small but it’s ideal for a one-man operation. There’s an awful lot of choice now for buying records in Leeds, but NoiseIsForHeroes is good because it’s compact and that forces me to keep the selection reasonably high in terms of titles I acquire. I go to car-boot sales, auctions, houses of other collectors and dealers, and people also bring stuff in. I find I pay more than I used to, and I’ve always been pretty generous to those wanting to sell.

Which genre or genres specifically does NoiseIsForHeroes specialise in?

I try to keep a little bit of everything, from rock to soul, blues, folk, prog-rock, but there’s a significant hardcore and punk collection here, about 20% of the shop that’s our bread and butter, what people will come from several miles around to shop here for. I have records that no other store in the UK does right now – not particularly expensive ones, maybe hardcore punk stuff from America that will sell at £20-30 – but it’s just nice to be on the lookout for something you’ve never heard of that’s ridiculously expensive, or that’s just really good.