What is it about Leeds as a city that makes it so appealing to young music fans and students?

There’s two sides of the coin really: we’re a heavy student town with the three universities, which brings a lot of people from around the country and from abroad into one place, which is then breeding an interesting music scene. However, there’s then the flipside that in the future, people then look and say ‘Leeds is a bit of a hotbed, there’s a lot going on there’, and then more visitors will come to check that out, so it’s become a virtuous circle. We’re a moderately big city, with a lot going on, a lot of culture, particularly music-wise, with more venues opening up to satisfy demand. 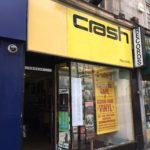 What makes Crash unique, and what aspects of it stand it apart from the other independent stores in Leeds?

Ourselves and Jumbo are the only two independent shops that stock new releases. Whereas Jumbo’s been around for going on 50 years, Crash has been open for 30 years, and there’s not a lot of independent shops in the whole of Britain that have been going for as long as either of us, so we’re very fortunate in Leeds that we’ve been able to sustain two for this long. Over the past year, other things have popped up, with a handful of second-hand shops that have been open a bit longer than that.

We’re not competing against each other, because we actually appeal to different music tribes. While we both do new releases which are indie-based, we come at the whole process from different sides. Jumbo is very world, folk, jazz, soul and that kind of thing, whereas Crash is more heavy and guitar-orientated – rock, punk, metal – and that’s always been our speciality.

Ian, the current owner, has a strong connection to the city. He’s worked as a rep for Sony Music, he’s worked at the old Virgin Records, the old HMV, has lived in Leeds all his life. I think that filters down to the other people who work here, we just embrace the city.

Do you feel students have been an important part of the vinyl revival?

We don’t particularly like the phrase ‘vinyl revival’ – we’ve never stopped selling ‘records’. Admittedly there’s more records out there now to sell – in the last six years we’ve gone from one rack to eight racks of records, on top of all the mail-order operations we do.

We always get a certain amount of the student population coming through, but that’s often more for the tickets we sell rather than the actual records. There is a younger generation that’s getting into records, and seeing them as a physical entity to run alongside their downloads and streaming.

I think the thing that might slow down this boom is the fact that a base price of an average record is going up and up all the time. In a short space of time, the asking price for a standard record has gone from £15 to £20 and pushing £25, even for a basic sleeve / no download code / ordinary black vinyl combination.

However, I think the older collectors are probably the biggest drivers of this boom, for instance your average music fan in his fifties or sixties who sold all his records in the 1990s and is now getting them back again. That more affluent demographic is important, because it is a very expensive hobby!