What do you think it is about Leeds that makes it so appealing to young music fans and students?

I think it’s become a self-perpetuating thing. I’ve lived in Leeds for about 20 years and it’s always had a good music scene in all that time, it’s one of those things that keeps renewing itself. If you’ve got a city with good gig venues, you tend to have good bands that come to play at them; then once you’ve got the good bands, other venues want to be a part of it.

There’s a section of the music population in Leeds that’s quite fluid. If you’ve got the number of students that we do in Leeds, then a significant portion of those will also boost the music community, so that’s another thing that keeps things moving year by year. It’s a constant cycle: if there’s good things in place, other people will want to help and move it along.

The independent shops and the record labels [Transgressive and Clue are both established Leeds-based labels – Ed] tend to work together too, but there’s also other outlets such as bars and clothes shops that represent the independent sector of the city, and they form a community that works together as well. 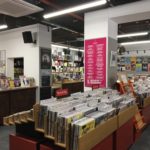 Much has been made of the vinyl revival – how important are students to this trend?

Definitely an important part. Twenty years ago, the start of the academic year in September was a very busy time in the shop – people coming in and spending their grants, etc. – but we started to notice about a decade ago that that wasn’t happening anymore. September was still busy, but absolutely not on the level that it used to be. But what we’ve noticed since about 2013 was that that demographic of students has been clawed back.

Vinyl buyers come from all sections of the population really, all ages and all social backgrounds, but it’s certainly something that’s getting more popular with students.

Is Record Store Day becoming too successful for its own good?

It’s a nice problem to have in a way, that demand for vinyl is so high that pressing plants can’t keep up. I mean, people do say it slows that pressing process down, but the original idea of RSD was to get people to come into independent record shops again, and it’s the success of that which has created this “problem”.

As for the stocks being left, that’s just a learning process, for shops and labels, and it’s actually become less of a problem in the last two or three years. Only recently, some labels thought the vinyl revival was a licence to print money, and that you could do just anything for RSD and it would sell, which obviously isn’t the case. The same goes for shops. The amounts we’ve been left with this year were minuscule, and some people do still want it after the event.

What in-store sections or aspects of Jumbo make it unique from the other independent shops in Leeds?

We have a local bands section, people have always been able to come in with CDs of their music, and we’ll sell them for them. That in itself doesn’t make us unique.

The interests of the people who work here are very diverse, we all have an input as to what we stock. We’re not specialist in terms of the music we sell, but we think that all the types of music we sell – and we do try to sell all types of music – we do with a degree of specialism, and that’s because everyone has that specialist knowledge that they want to push. That’s part of our character, we’re very open, and I would say fiercely anti-music snobbery. It’s always been a principle of ours that whatever type of music you’re into, hopefully there’s a space for you here, and even if not, we’ll try and find it for you. You’d struggle to find many shops now that have that ‘Jack Black in High Fidelity’ atmosphere.