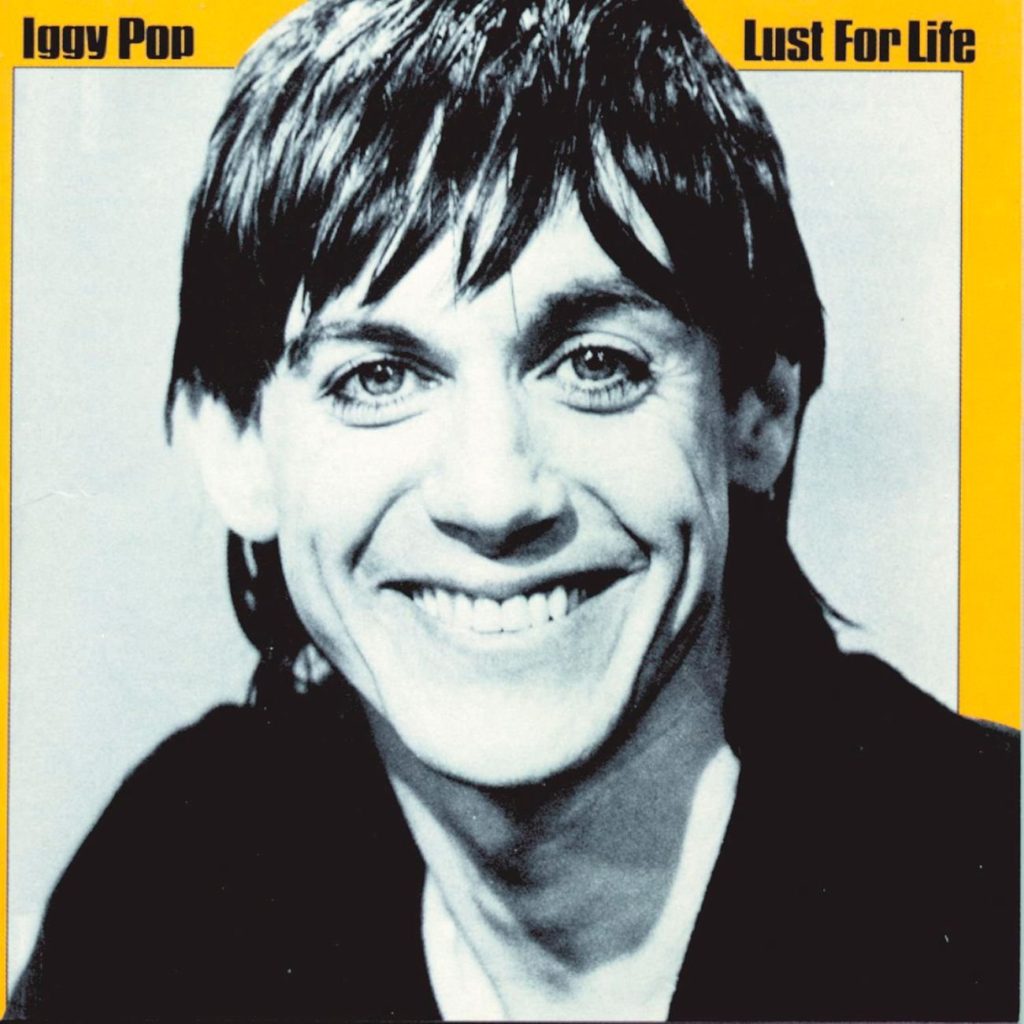 Influenced by: The Velvet Underground, MC5, The Doors, The Rolling Stones, The Who, The Thirteenth Floor Elevators, David Bowie, New York Dolls

As well as being the year that punk broke, 1977 was also the year that made a genuine star out of Iggy Pop – an individual who, along with his band The Stooges, had done as much as anybody else to lay down the basic musical blueprint of punk in the first place with cult classic albums like Funhouse and Raw Power. Down and out and virtually forgotten just a few years before, it was his close friendship with David Bowie that led to his personal and artistic rehabilitation throughout 1976, culminating in the recording of Iggy’s debut solo album The Idiot, released in early 1977.

With Bowie at the production controls, Iggy embraced a decidedly different sound from the riotous, grungy proto-punk of his Stooges past, exuding introspection and self-doubt while setting his compositions to discordant, fragmented and cerebral music. The Idiot was a superb exercise in personal redemption and musical reinvention, leading to critical reappraisal, but many felt it was too influenced by Bowie’s oeuvre, given what he himself was to release in 1977 with Low and “Heroes”, with not enough of Iggy’s personality stamped on it.

While there’s some truth to this, it’s rather unfair on Iggy’s contributions, and in any case, those same critics would shut their mouths when his second solo album Lust For Life was released less than six months later. If The Idiot really was, for the sake of argument, merely a Bowie album in disguise, this was most definitively not. Bowie was behind the production desk once more, but Lust For Life was much more like Lou Reed’s 1972 album Transformer – both in terms of the same kind of artistic rehabilitation of a forgotten underground icon, and of the commercial exposure it enjoyed in the mainstream – where Bowie was more of a sounding board in bringing his colleague’s vision to life. Similarly, Lust For Life was Iggy’s album, from the ground upwards.

Having completed a brief tour of The Idiot in April, Iggy and Bowie determined they should strike while the iron was hot and get recording its successor immediately, and do so quickly in the name of spontaneity. Entering the famous Hansa Studio in Berlin, where the two had set up residence the previous year and in which Bowie would soon record his own “Heroes”, the record was written, recorded and mixed in an intense eight-day period.

With members of Bowie’s backing band behind him, including guitarist Carlos Alomar, and the distinctive rhythmic engine room of Tony and Hunt Sales on bass and drums respectively (who would much later join Bowie’s Tin Machine project), the sound they created was much closer to the garage-bound proto-punk of The Stooges than the noir-ish industrial sounds of The Idiot. Iggy slept little during the sessions, often improvising his lyrics simply in order to keep up with the pace of Bowie and everyone else. “See, Bowie’s a hell of a fast guy… I realized I had to be quicker than him, otherwise whose album was it gonna be?” Iggy recollected years later.

If The Idiot had been an analysis of a man tentatively feeling his way back into music, full of introspection, Lust For Life was the sound of a complete transformation – confident, peacocking and the sound of a man at peace and enjoying himself. Right from the Sales brothers’ rattling drum and bass guitar assault of the opening bars of its distinctive track, which seems to have become a calling card for everything that Iggy Pop stands for in music. Full of power and spirit, Iggy is in inspired lyrical form, channelling William S. Burroughs’ fictional character Johnny Yen and delightfully bizarre lyrics about “hypnotising chickens”.

From this point on, Iggy’s band lay down a wiry, muscle-bound rock that, while a far cry from the primordial sound of The Stooges, is still gritty and raw enough to give Iggy’s voice the context it deserves. Alomar, the Sales brothers and Bowie (on keyboards) are versatile and experienced enough to keep the swirling, swampy psych of ‘Sixteen’ just about on the right side of chaos, while on the stomping brilliance of ‘Some Weird Sin’ or the lean funk of closer ‘Fall In Love With Me’, they execute rhythms that could have come straight from Bowie’s own glam period. The neo-punk feel of ‘Neighborhood Threat’ sounds a lot less menacing than you’d expect a song by Iggy Pop with this title to sound, but it shows how much more multi-faceted his outlook and abilities had become despite his time out of the spotlight.

However, the band can also do more straightforward blues-rock. ‘The Passenger’, the second of two incredibly famous tracks on Lust For Life, is sheer kinetic, irresistible motion to which you just can’t help moving some part of your body. The springy, elastic riff is to die for, utterly familiar yet completely revelatory at the same time. The gentler rock feel of ‘Tonight’ sounds colossal coming out of even the smallest set of speakers, while the decadent and possibly tongue-in-cheek ‘Success’ with its call-and-response chorus has just the right amount of confident sleaze to make it endearing. The twilit blues of ‘Turn Blue’ is ever so slightly over-the-top in terms of the band’s delivery, with its elongated holds between bars, and it introduces the longer, more exploratory final third of Lust For Life perfectly.

However, despite being backed by expert rock musicians at the top of their game, Iggy never loses the spotlight even for a second, given a second lease of life when he could quite easily have been dead at this point in time. It’s even reflected in the cover art, boasting a clean-cut, smiling Iggy posing for what seems for all the world like a high-school graduation photo, a valedictorian effort from an individual determined to show the world what he can do by himself.

Lust For Life is certainly hedonistic, with its lyrical concerns touching on all the typical Iggy / Stooges preoccupations – drugs, alcohol, decadence and consequent bad decision-making. ‘Tonight’ and ‘Turn Blue’, in particular, both touched on heroin abuse and got quite dark in doing so. However, the tone of Iggy’s delivery here is different, seemingly to be able to resist some of these temptations now, whereas in most Stooges tracks he’s a helpless slave to his vices.

‘The Passenger’ seems to have Iggy observing from a window dispassionately as he reels off his previous excesses, resolved to keep them behind him, relishing the same lust for life as the title of the album itself. The street-walking panther of Iggy’s past was now in a limousine looking out, and it’s this sense of career resurrection and transformation that makes Lust For Life and its predecessor such brilliant time-pieces 40 years later. Iggy’s new outlook is reflected in the music itself: while it most definitely rocks out, it’s cleaner-cut and more stable than the often chaotic Stooges tracks.

While it didn’t do so well in his native America, with RCA dropping its promotion to focus on flogging old Elvis Presley albums in the wake of the icon’s death that August, Lust For Life gave Iggy some real exposure in Britain for the first time, eventually going Gold. Its lead single received a revival of public interest when the pounding opening rhythm was used in the iconic opening sequence of 1996’s Trainspotting.

Iggy Pop’s subsequent career saw him enter various peaks and troughs in the Eighties and Nineties, before a reunion with the surviving Stooges brought him back to prominence in the mid-Noughties. In 2005, an excellent career summation compilation, A Million In Prizes, was released and is essential ownership alongside these two solo records. All went quiet again, before he collaborated with Queens Of The Stone Age’s Josh Homme and Arctic Monkeys’ Matt Helders in a new solo project, yielding 2016’s spirited and ebullient Post Pop Depression. He can be heard on the radio, presenting a BBC Radio 6 Music programme every Friday evening, called Iggy Confidential.

Lust For Life, along with its immediate predecessor, are still regarded as Iggy’s finest solo works four decades later. It was fortuitously timed, as the British and American punk scenes were really beginning to pick up steam in the second half of 1977, and Lust For Life was a timely reminder to the young pretenders that a master was still at work.

Listen to Lust For Life here via Spotify, and tell us what you think below!