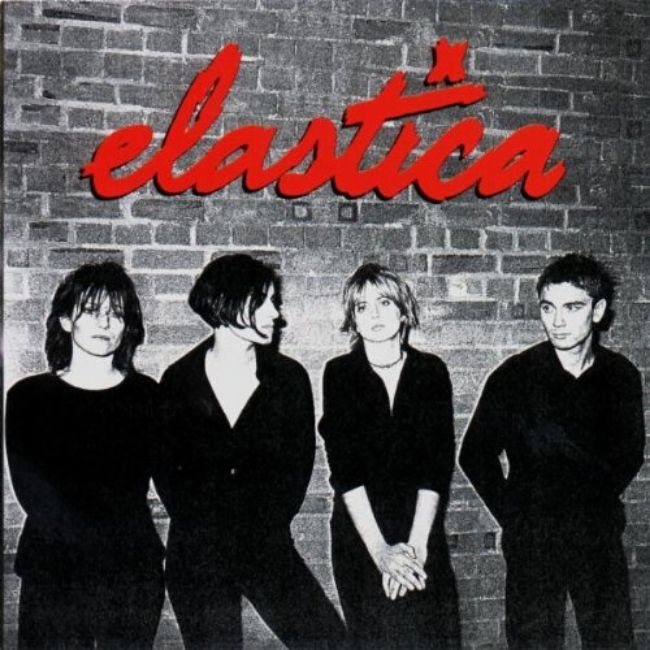 Britpop is often regarded as one of the last great upheavals in popular music, but it was not a revolution in comparison to previous movements, such as punk or acid house. It was not a unified sound, even in the same way that grunge, just a few years before, had been. Instead, Britpop was an inchoate quasi-movement of (initially) great bands who all sounded different yet happened to be operating in the same time and space. Virtually all of its imagined progenitors spent most of the time slagging each other off in the music press, irritated at how they were all getting lumped in together. The contrast between Elastica and the likes of Oasis, Blur and Suede could not have been more pronounced in musical terms. Where all three of these latter bands were indebted to Sixties pop, mod and early Seventies glam-rock, Elastica took inspiration from post-punk and new wave. When their self-titled album was released in March 1995, it couldn’t really have stood out more from the crowd into which they were lumped. Yet, it rocketed to the top of the UK charts, becoming the fastest-selling debut album since Oasis’ Definitely Maybe the previous summer.

This pushing of previously quite obscure musical references – The Fall, Wire, Buzzcocks – to the top of the charts was largely down to the vision, writing and stage presence of Elastica’s frontwoman Justine Frischmann. As well as being an inspirational, muse figure for Brett Anderson and then Damon Albarn, thus fueling one of Britpop’s more fruitful creative rivalries between Suede and Blur, she helped to change a great deal of largely male rock critic-prescribed notions about what a commercially successful guitar band in the Nineties could do, look, behave and say.

Having initially stirred up a great deal of hype with their first two singles ‘Stutter’ and ‘Line Up’, Elastica deliberately disappeared from public view in early 1994, ceasing all promotional activities and refusing interviews to hole themselves up and nail down a great debut album. Frischmann understood enough about the music industry, having seen it exact tolls on Anderson and then Albarn, to know that Elastica would have to be able to walk the walk, having talked the talk with all those column inches and magazine covers. “It’s imperative that you should be written about for your music,” she told Melody Maker afterwards, perhaps conscious of the way that Britain’s press had been talking about her largely in terms of her personal life and famous boyfriends.

The queasy, lurching cynicism that cuts through the boisterous ‘Line Up’ that opens Elastica serves as the band positioning and defining themselves, simultaneously celebrating and satirising the cocaine-and-groupies, cliché-fueled Britpop scene, of which they were suddenly one of its leading lights. Yes, it was essentially an amped-up, slowed-down recycling of the riff from Wire’s ‘I Am The Fly’, but Elastica’s personality transcends the sum total of its creators’ clearly well-worn record collection. The key, as always, is context. The surging punk and raging hormones of ‘All-Nighter’, the fleeting romance told by a bored narrator on ‘Hold Me Now’, the casual hook-up portrayed in the playful ‘Car Song’ and the hazy, hungover confusion of ‘Waking Up’… all represented an act of triangulation against the contemporary music scene of the mid-Nineties, as well as introducing the listener to the group’s series of scathing yet witty missives and occasional existential ennui.

Frischmann’s lyrics often served as the most compelling aspects of Elastica. Take, for instance, the deliberate ambiguities of the kiss-off line of the group’s best-known song, ‘Connection’. “I don’t understand how a heart is a spade / but somehow the vital connection is made”, she sings mysteriously, coming on like an English Debbie Harry. It could refer to affairs of the heart, or the practicalities of networking, but, in addition to the raw physicality of the riff (again indebted to Wire, and their micro-track ‘Three Girl Rhumba’) it makes for the record’s most immediate surge of excitement. The puzzling ‘2:1’, which later appeared on the Trainspotting soundtrack, was lyrically constructed from fractured word snippets (“keeping a brave face / in circumstances / is impossible / cannot describe”) and the punk harmonies of ‘Blue’ (“Do you recommend I wait a while / Direct and live or keep it constant”) deal in similar vaguenesses.

However, Frischmann’s approach in other places could be perfectly straightforward. The two-minute sprint of their 1993 debut single ‘Stutter’ (which closes Elastica) is in many ways the perfect encapsulation of the group’s aesthetic of musical reconstitution: catty taunts of “you’ve had too much wine to stumble up my street” entertainingly address male ego and erectile dysfunction, set to Donna Matthews’ bone-shaking guitars and the frantic rhythmical bursts from Annie Holland and Justin Welch.

Similar are the song sketches of ‘Vaseline’, a sly wink of a track addressing the same issue, the sonic burst of ‘Smile’ and the superhero song-esque ‘Annie’, written in dedication to their bassist. For each art-rock moment of opacity, there’s an accessible, stripped-down and pop-orientated track telling stories of coffee/wine-fuelled exploits in Britain’s cultural capital, and it gives Elastica a great sense of balance and prevents it from becoming one-paced. Amid the whirlwind of vignettes on hormones, chemicals and situations, however, there’s a couple of concessions to heartfelt sentiment on Elastica, the genuinely striking reflection on spiritual and literal loneliness and relationships under stress of ‘Never Here’ and the parodistic ballad ‘S.O.F.T.’.

Many commented on Justine Frischmann and her bandmates’ rejection of feminism (or, at least, gender essentialism) during their career. Frischmann had little time for the contemporaneous riot-grrl movement, and wanted Elastica not to be defined as a ‘female-led band’ but judged on their own terms. Judging by the black-and-white shot of the group on Elastica’s front cover, posing against a brick wall in plain clothes and short haircuts, they seem to embracing an image that’s not explicitly feminine but more androgynous.

Despite its largely Anglophile references, Elastica also sold in very healthy numbers in America when snapped up by the big-hitting Geffen, with two Billboard Hot 100 singles resonating with a country enamoured with the loud, catchy pop-punk of post-Nirvana groups and a music press refreshingly unconcerned with Frischmann’s romantic life. Those influences did come back to bite them, however, with both Wire and The Stranglers’ publishing companies settling out of court with the band over tracks containing similarities to their clients’. But when Wire’s first two records were re-issued in the wake of Elastica’s success and were rediscovered by a newly curious fanbase, you have to ask where the harm was done.

Unfortunately for Elastica, their career would stall and eventually implode in a mess of drug addiction, personnel changes and creative inertia. Fame didn’t particularly agree with them, with most of the group developing serious drug addictions. Donna Matthews, a whirlwind of self-taught attitude on the guitar alongside Frischmann, quit the band, closely followed by Annie Holland, although the latter would eventually return. It took over five years for them to eventually release a follow-up, but when The Menace arrived in 2000 it was ignored. A post-Britpop scene enamoured with the safe dreariness of Travis, Coldplay and David Gray wasn’t in the mood for its stripped-back, synthetically enhanced take on loose post-punk, and it stalled at a lowly no.24. The group were in a different, more diffuse place, pulling in different directions creatively, and Elastica dissolved in 2001.

A quarter of a century on, Elastica’s reputation is not as strong as it ought to be. Although their legacy admittedly consists almost entirely of their debut, you could say the same about The Stone Roses, and they’re continually the subject of nostalgia and endless re-packages. Perhaps the male-dominated nature of the prevailing discourse around Britpop has had something to do with it, creating a canon where only Frischmann and Sleeper’s Louise Wener ever get a look in. The kinds of journalists who would decry Elastica’s indebtedness to post-punk figureheads would completely ignore the Gallagher brothers’ larceny of the Beatles back catalogue. Perhaps it’s also to do with the fact like, unlike many of their contemporaries, they’ve steadfastly refused the occasional offers they’ve received to reunite.

Sadly, their influence isn’t that detectable in today’s indie landscape. Bands like Savages have picked up on Elastica’s style and channeled it into something more confrontational, and the likes of Dream Wife, The Big Moon and Wolf Alice share their knack for a glorious melody. But as much as any of the blockbuster albums of its time, Elastica is a perfect snapshot of a time that proved to be all too fleeting.

Listen to Elastica by Elastica here via Spotify, and tell us what you think below!