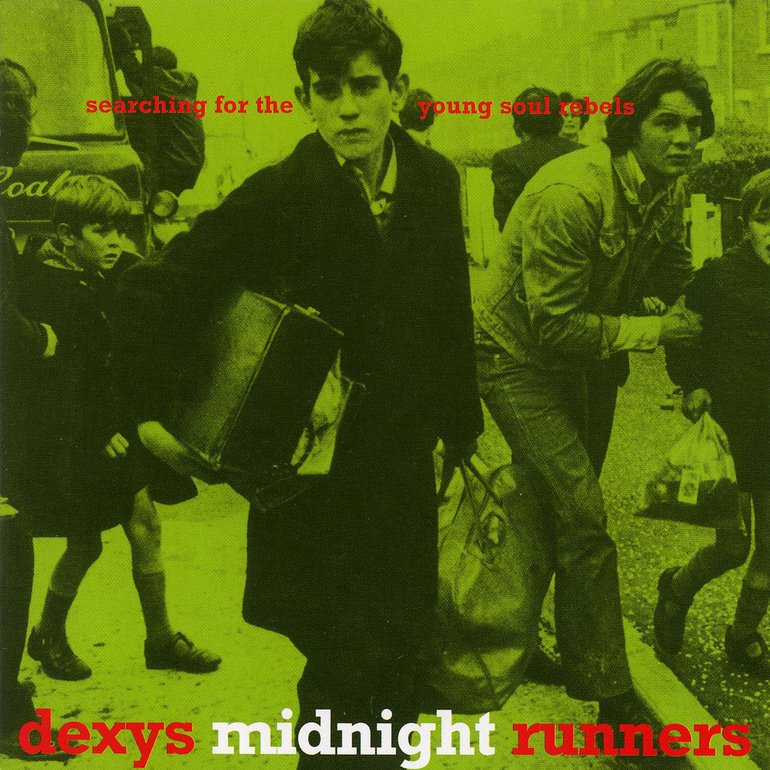 To most people – certainly in America and, forty years on from their inception, probably most people in Britain too, sadly – Dexys Midnight Runners are known pretty much solely for their 1982 chart-topping hit ‘Come On Eileen’, a deathless staple of weddings, office parties and barbecue playlists for decades. But to remember them solely for one song would be a serious mistake. Over the course of around six years, four different line-ups and three breathtaking and strikingly different studio albums, Kevin Rowland led one of the most distinctive British bands that has ever existed, his perfectionist’s ear leading to almost constant strife with his creative foils but leading to some immense artistic achievements. Some of that music achieved major critical success and multi-platinum sales figures, at least as much of it didn’t, but all of it was intriguing.

The first of these line-ups produced the group’s 1980 debut album, Searching For The Young Soul Rebels. Formed from former bandmates in short-lived Birmingham punk outfit The Killjoys, Kevin Rowland and Kevin ‘Al’ Archer took their new band’s name from Dexedrine, a form of amphetamine favoured by Northern Soul fans to make them dance all night. Snapped up by Clash manager Bernie Rhodes and securing a support slot with The Specials on their massive UK tour in late 1979, they released their debut single ‘Dance Stance’ – re-recorded for the eventual album as opener ‘Burn It Down’ – before the end of the year. When it stalled at no.40 in the charts, amid accusations that Rhodes had botched the production, Dexys signed with EMI. More trouble ensued when, discovering they were only being paid 6% royalties instead of the industry standard 10-12%, the group stole the master tapes of their recordings and held them to ransom while on their UK tour.

Released in July 1980, Searching For The Young Soul Rebels represented a revolutionary vision for soul music, infused with the energy of punk and the passion of poetry and updated for the Eighties. Their image, inspired by the hats and jackets of New York stevedores and the cast of Scorsese’s Mean Streets, inspired an unusually broad and devoted fanbase across Britain’s youth, particularly for a period in which displays of music fandom were highly tribalised and codified. Their second single ‘Geno’, a stomping soul track cleaving closely to the style of soul legend Geno Washington and his Ram Jam Band, hit the top of the UK Singles Chart in May 1980, had prepared the public for the album itself.

Searching For The Young Soul Rebels is defined by tension, both between the demands of the disparate styles that they held together like a centrifugal force, and the one that seemed to be tearing Kevin Rowland apart. His psychodramas and penetrating self-analysis, expressed through a striking series of vocal tics and performances ranging from yelps of heartbreak to spoken-word poetry, were at odds with the whole ‘band as gang’ mentality that Dexys clearly wanted to project around this time, but had the DIY aspect that had made punk such an indispensable part of the British music scene. Often, it seemed as if Dexys Midnight Runners was little more than a backing band for Rowland, such is the extent to which he steals the spotlight. The individual and the collective were not always reconcilable, but it made for some thrillingly unstable and emotionally volatile music.

Right from the radio dial being tuned in the opening seconds of ‘Burn It Down’, switching between Deep Purple, the Sex Pistols and the Specials before Rowland shouts “For God’s sake burn it down” and sounding like it belongs on a punk 7”, the album is a vibrant exploration of soul music and its relationship with rock, treating its source material with reverence but enough playfulness to retain its edge so many years later. The band lay down solid R&B grooves with brassy, infectious hooks – the frantic take on Northern Soul favourite ‘Seven Days Too Long’, the upbeat stomper ‘Tell Me When My Light Turns Green’ and the frankly bonkers ‘Thankfully Living In Yorkshire It Doesn’t Apply’ are all scorchers – but they’re also subtle and talented enough to successfully take on slightly more mannered material such as self-flagellating ‘I’m Just Looking’ and ‘I Couldn’t Help It If I Tried’. Closing track ‘There, There, My Dear’ is possibly the most underrated moment in Dexys’ whole catalogue, a vitriolic attack on pretension in pop set to bold, Stax-influenced horns that namechecks figures from J.G. Ballard to Frank Sinatra as mis-used badges of culture.

The kind of internecine band rivalries that would define the short lifetime of Dexys Midnight Runners struck towards the end of 1980, when Rowland insisted on re-recording his lyrics for Kevin Archer’s ‘Keep It’ for the purposes of releasing it as a stand-alone single, with the unwieldy title ‘Keep It Part Two (Inferiority Part One)’. Its complete failure to chart at all led to five members of Dexys, Archer included, quitting the group. A slow re-building process, during which Dexys acrimoniously switched labels, gradually led towards their second album, 1982’s excellent Too-Rye-Ay and the aforementioned ‘Come On Eileen’, the biggest-selling single in the UK that year. At the dawn of Thatcherism, though, Searching For The Young Soul Rebels was the timely soundtrack for frustrated youth, and for many is one of the defining counter-culture records of the Eighties.

Listen to Searching For The Young Soul Rebels by Dexys Midnight Runners here via Spotify, and tell us what you think below!

Influenced: The Pogues, The Teardrop Explodes, The Style Council, The Smiths, The Charlatans, Pulp, Blur, The Ordinary Boys, Ted Leo & The Pharmacists