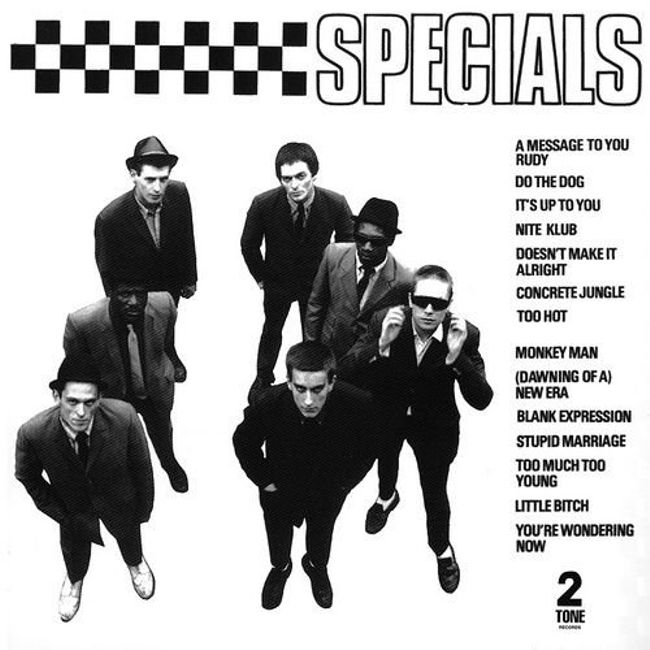 A brief but hugely commercially successful and fondly remembered trend within British music at the end of the Seventies, a point at which the social fabric of the country itself seemed to be disintegrating, no band is more associated with the ‘2 Tone’ sound than The Specials. Happening in between the explosion of punk in 1977 and the emergence of the New Romantics in the early Eighties, 2 Tone denotes a particularly urgent take on the Jamaican ska sound and whose aesthetics are also bound up with a record label of the same name. Whereas original ska had attracted the lazily attributed journalistic reputation of simply being ‘good times music’, this English mutation was fearful, desperate and bitterly pessimistic and containing the urgency of first-wave punk – so different, that it was only suitable to identify it as ska’s second wave.

Christened as 2 Tone, this second wave was named after the record label created by The Specials’ keyboardist Jerry Dammers, who felt that a whole new label was necessary to distribute this new sound. The concept of 2 Tone extended beyond just the sound of the music, reflecting visually in the band’s distinct image. The iconic cover of the group’s self-titled debut album simply displays a panel of checkerboard, the title Specials, and a picture of the band in monochrome. Additionally, all are clothed in tonic suits with white shirts and pork pie hats adopted from the attire of ‘60s mods and Jamaican rude boys, telling the world that all the trademarks of ska were back, but with an unfamiliar sound. This new variant was aspirational and multi-cultural. In the context of the Midlands in the late Seventies, stricken with unemployment as traditional heavy manufacturing industries declined and with social unrest beginning to affect daily life, The Specials – a group that contained both black and white members – offered an alternative, a way out and a plea to fans to think differently.

After undergoing a number of different line-ups and performing under different names in their formative years, including as The Coventry Automatics, by 1979 The Specials had sorted out their name and settled on a seven-piece formation sourced from a number of local bands – consisting of Dammers, singers Terry Hall and Neville Staples, guitarists Lynval Golding and Roddy ‘Radiation’ Byers, bassist Horace Panter and drummer John Bradbury. Having blagged a support slot on The Clash’s On Parole tour, things happened quickly for The Specials, culminating in the release of their debut single ‘Gangsters’ in May 1979. By late October, they had recorded their self-titled debut, which carried over the DIY ethos and youthful energy.

The Specials’ unique blend of ska and punk with its hollered lyrics and bleak yet intelligent outlook, coupled with classic ska performed at a considerably higher tempo to the norm seemed to click perfectly, helped to birth a new strain of ska entirely. After performing an unsuccessful blend of punk and reggae for several years, the new group’s drive was primarily located in the uptempo ska of rhythm guitarist Lynval Golding, inspired by his record collection inherited from his father, and the clattering percussion offering by John Bradbury, as well as Dammers’ overarching vision for the music. Something about the urgency of the record’s offbeat stabs of brass and guitar lent itself to Terry Hall’s unpolished and disarming vocal style, which seemed to be half-muttered and half-yelled.

Musically, the results on The Specials are a gold mine, particularly in terms of the original compositions. The likes of ‘It’s Up To You’, ‘(Dawning Of A) New Era’ and ‘Doesn’t Make It Alright’ are messages of positivity and of racial and social unity, the latter in particular inspired by the fledgling Rock Against Racism movement. Roddy Radiation’s self-penned ‘Concrete Jungle’ tackled inner-city violence, while Dammers decries class privilege on the anachronistically titled ‘Little Bitch’. The social commentary offered in the thematically linked, back-to-back ‘Stupid Marriage’ and ‘Too Much Too Young’ (the long, slower version, as opposed to the two-minute live version that topped the charts in 1980) paint a more nuanced call for personal responsibility, as opposed to the sloganeering of some first-wave punk.

The Specials were careful to not completely alienate listeners with politics, however, as the careful balance of scabrous originals and energetic covers attests. Whilst injecting plenty of modern bite with the help of producer Elvis Costello, which appealed to the punks jumping onto the vague ‘new wave’ bandwagon in the build up to the ‘80s, they also acknowledged the roots of ska, holding on to a handful of popular genre classics that made their way onto the album and served to leaven the mix. Staples such as ‘A Message To You, Rudy’ by Dandy Livingstone and ‘Monkey Man’ by The Maytals anchored proceedings firmly to ska, and allowed a shimmer of hedonistic optimism to shine through. Indeed, although their original compositions are superb, The Specials were extremely skilled interpreters of the work of others – covers of The Skatalites’ ‘Guns Of Navarone’ and ‘Gangsters’, itself a re-working of Prince Buster’s 1964 hit ‘Al Capone’, date from around this time.

In 14 songs, The Specials managed to simultaneously portray the greatness and grimness of Britain in 1979. Part celebration of ska classics and part scathing social commentary, it took a wonderful product of racial and musical diversity – as ska is a melting pot of several styles from Jamaica – and puts it in stark contrast with what happens when you let the people who hate it turn it sour.

By the end of 1979, four bands on the 2 Tone label – The Beat, The Selecter, London’s Madness and The Specials themselves – all appeared on ‘Top of the Pops’, signaling the arrival of the scene into mainstream consciousness. While it was short-lived, all but extinct roughly two years later, the 2 Tone era is extremely well remembered, and for good reason. However, no greater artefact of the time exists than The Specials, a consistently energetic and thoughtful album that contains houses roughly half of the group’s best-known tracks within its quick-fire 45-minute run-time.

Additionally, something quite unnerving about The Specials is that it is still remarkably applicable to modern day Britain. Without mentioning the dreaded ‘B’ word, we have an uncertain economic and political situation scheduled to arrive on a date in the very near future, which is also responsible for an increase in racially-motivated attacks across the country, reflecting worryingly similar times to 1979 – and that’s on top of the obvious comparisons of the effects of nine years of Cameronian austerity with the shock of industrial decline. In terms of mood, The Specials is as relevant in 2019 as at any point in the intervening forty years.