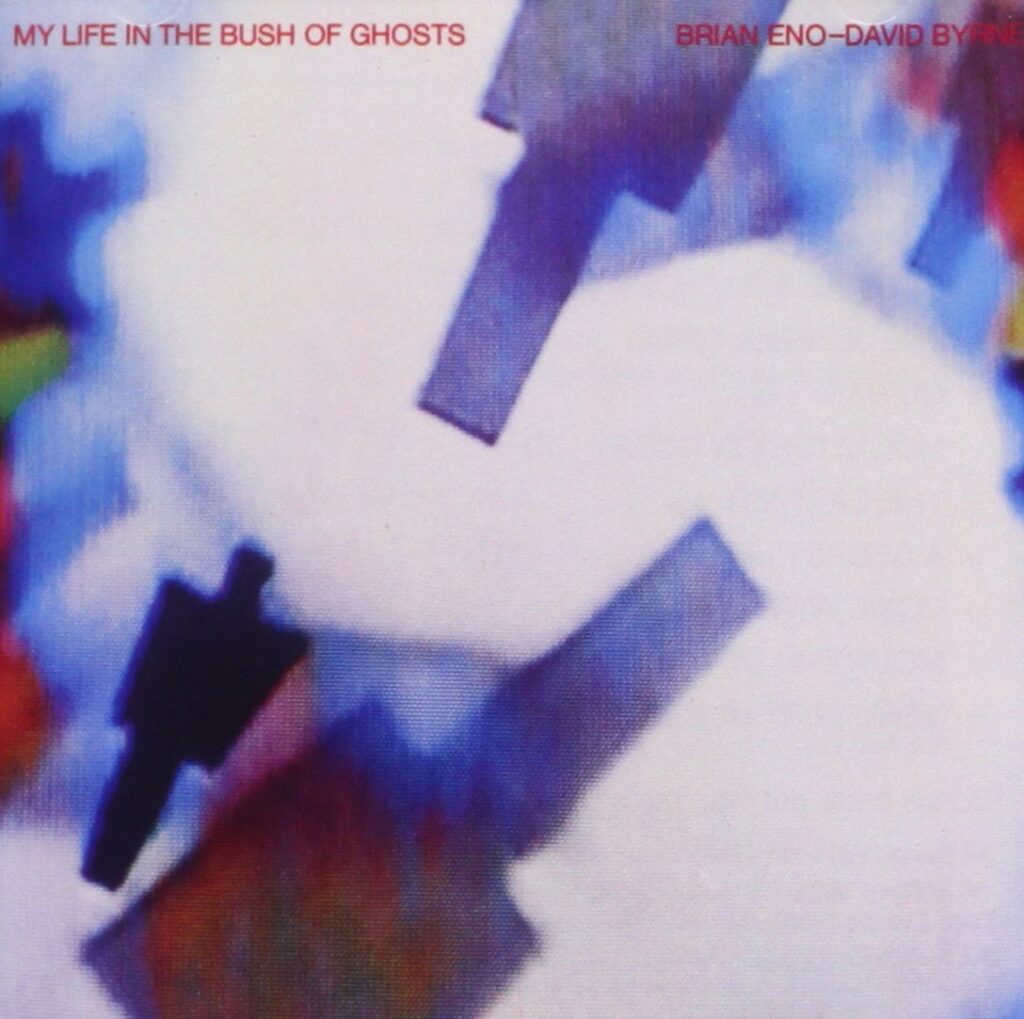 In 1981, as the increasingly diluted New Romantic scene dominated the charts to symbolically mark the final extinguishing of punk’s flame, an album with absolutely nothing in the way of radio-friendly melodies crept into the lower reaches of the UK Top Thirty. Not only would it capture an audience way larger than the music of the kind that it contained would normally have expected to reach, but it would represent a beacon of inspiration for generations, a signpost to the future in musical, technical and cultural terms. That record was a collaboration between production genius and ambient music pioneer Brian Eno and Talking Heads’ lead singer David Byrne, titled My Life In The Bush Of Ghosts.

Having worked together on the Heads’ second and third albums More Songs About Buildings And Food and Fear Of Music in the late Seventies, Byrne and Eno became increasingly interested in exploring non-Western sounds and experimenting with new technology. They set about creating music from a range of unconventional sources whose provenance would come from around the world, and blending those sources with chopped-up, re-arranged soundscapes performed by session musicians. In doing so, they created an embryonic form of what would later be coined ‘world music’, and something that would seem increasingly prescient as popular music evolved during the Eighties and Nineties.

In terms of the recording techniques that Eno and Byrne deployed, My Life In The Bush Of Ghosts was light years ahead of its time, and radical for the early Eighties. The widespread use of sampling and tape loops was some years off, and Eno’s expressed desire to create “collage music, like grafting a piece of one culture onto a piece of another” to resolve them as a “coherent musical idea” was way outside the ambitions of any major label artist of the time. There were some precedents for what they were doing, but not many, and none of them had anywhere near the same impact. Eno had covered similar field recording-based work in previous collaborative work with Jon Hassell, but working with David Byrne was always going to guarantee a wider audience, so the stakes were bigger. Cabaret Voltaire had already experimented with cut-ups, a crude precursor to sampling, but they hadn’t been put to the purpose of sonic world-building in the way that Eno and Byrne attempted. Movies, the 1979 album by former Can bassist Holger Czukay, was the only genuine blueprint in existence for My Life In The Bush Of Ghosts.

Together, Byrne and Eno sourced recordings from all kinds of locations, assembling a bricolage of Western radio talk-show hosts, Lebanese mountain singers, evangelist preachers, exorcism ceremonies, Muslim prayer chants and Egyptian pop. They foregrounded those samples against a textured backdrop of talented session musicians playing bass and percussion – among them, Talking Heads’ own drummer Chris Frantz – playing syncopated, polyrhythmical funk influenced by Afrobeat and jazz, sometimes using household items to hand like boxes and food tins as percussive objects. There was also a significant degree of good fortune involved: Eno happened to be playing around with a brand new type of drum machine at the time, one which allowed for the novel arrangements you hear. In sonic terms, they had helped to forge a completely new way of recording, uncovering obscure sounds from around the globe – music that would, to many Western ears, have sounded like the Fourth World – and presenting them in an aural collage, the field recordings being ordered by the precise yet elastic funk rhythms into infectious, repetitive hooks.

You might call this approach cultural appropriation in the 21st century, but in 1981 it undeniably had a catalysing effect on creativity in artistic circles. Undeniably, it was also refreshingly different from the previous generation’s attitude towards this kind of thing, exemplified by the preservationist, reverential distance maintained by the likes of Alan Lomax when he captured American folk. Eno and Byrne’s approach was much more playful, yet still felt respectful and done in the right spirit.

Right from the wriggly, tribalistic shake and stomp of opening track ‘America Is Waiting’, My Life In The Bush Of Ghosts seeks to disorientate the listener with unfamiliar sound but, at the same time, not entirely overpower them. For example, you can detect the DNA of both Byrne’s and Eno’s musical pasts in the pattering ‘Mea Culpa’, both the slinky art pop of Roxy Music and the urbane, mannered funk of Talking Heads, and it’s this that provides a thread of conventional structure to the album. It grounds proceedings in the vaguely recognisable, and stops it from drifting into overly highbrow or worthy territory.

‘A Secret Life’ feels like a sister song to Fear Of Music’s paranoid closing track ‘Drugs’, with its samples of Lebanese singer Samira Tewfik manipulated to the point where they sound almost lysergic. By the time the album ends with the ambient, almost spiritual ‘Mountains Of Needles’, the album has shapeshifted so many times, and so seamlessly, that the entire thing has felt like a journey into sound. Each track is distinct as a mood or vibe, yet makes more sense as part of the whole. From the Baptist preacher set to the instinctive, nervy polyrhythms of ‘Help Me Somebody’ to the moody ‘Moonlight In Glory’, which matches American folk singers to minimalist stabs of bass, all the combinations twist and mutate into exciting new shapes, making connections between disparate ideas.

There was controversy on a couple of fronts, mainly concerning the album’s single ‘The Jezebel Spirit’ which sampled a real-life exorcism in New York City and set it to juddering Afrobeat. Byrne and Eno came in for a great deal of criticism for, what critics felt, was the diminution of a sacred ritual for entertainment purposes. It’s a sparkling production, all arguments aside. Furthermore, ‘Qu’ran’ drew objections from the Islamic Council of Great Britain for its use of prayer chants of excerpts of the Koran – on all subsequent issues, it was swapped out for ‘Very, Very Hungry’, which had been the B-side to ‘The Jezebel Spirit’.

My Life In The Bush Of Ghosts still feels like a living, breathing document forty years on from its release, an adventure in sound for the ages as well as a key text for any and every artist whose work has relied on sampling. The beats here sound like they could belong under a Timbaland production, or on an early Aphex Twin track, so diverse and diffuse has its impact been.

It has helped that its reputation in the minds of critics and the public is closely tethered to that of Talking Heads’ revered Remain In Light. Indeed, My Life In The Bush Of Ghosts was recorded before that album even began its recording sessions in mid-1980, but issues with sample clearances held it up so that it was released four months after Remain In Light. When it was reissued for its 25th anniversary in 2006, a remix website was launched at the same time where, using a Creative Commons license, listeners could download multi-tracked versions of the songs and remix them themselves, however they pleased. Not only was this a pleasantly democratic action, but it underscored the lasting importance of My Life In The Bush Of Ghosts to sampling and remix culture.

Listen to My Life In The Bush Of Ghosts by Brian Eno & David Byrne here, and tell us what you think below!