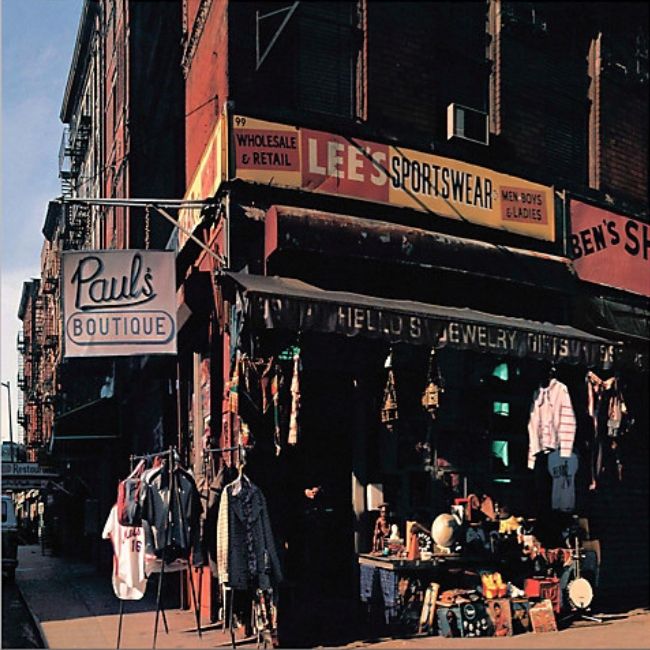 In the aftermath of their legendary party-starting debut Licensed To Ill in 1986, Beastie Boys were in a curious place. They moved to the West Coast and entered a period of painful litigation trying to extract themselves from their record deal with Def Jam, the equally legendary East Coast hip-hop label, eventually with success. Throughout 1988, having secured a new deal with Capitol but at the same time alienating themselves from their debut album’s producer Rick Rubin, the trio were derided by their peers and many critics, seen as commercial fodder only. Serious hip-hop fans dismissed them as frivolous for appealing to bored middle-class suburban white kids – reflected in all those thousands of VW insignia nicked by their fans – even though they had been on massively successful world tours in support of the fervently political Public Enemy. They were “a fratboy parody that got out of hand,” according to Pitchfork, and if they could possibly leave Def Jam, they could take their future into their own hands. Their second album Paul’s Boutique, released in the summer of 1989, changed all that.

It changed it so much so, in fact, that for a number of years the Beasties lost a significant amount of their audience. In terms of bafflement and the impact it (eventually) made on its community years after the fact, Paul’s Boutique was the equivalent of Radiohead making the moody electronica of Kid A after conquering the world with the complex but nevertheless conventionally guitar-based OK Computer. Only debuting at #14 in the Billboard 200 and, even worse, at an even lowlier #24 in the hip-hop charts, it caused the Beasties to be written off as one-hit wonders by a public who thought they’d lost the plot. But, as is so often the case, the critics knew best, and now that perception of the band simply doesn’t exist any more.

Where Licensed To Ill was brazen and sometimes crude in its choice of samples, Paul’s Boutique was vastly more subtle, eclectic and inventive in sourcing its material. Lyrically speaking, Mike D, Ad-Rock and MCA were still playful but very much more dexterous, and this time it was matched by the music. Indeed, there are so many lyrical and musical tricks crammed into its 53 minutes that you can listen to it over and over again and pick out new aspects and previously unheard snatches of invention, as the tracks segue off from their main trajectory for a couple of seconds and return. The album’s cultural outlook was simultaneously highbrow, in terms of its newfound musical maturity, and lowbrow, insofar that the Beasties still called their songs things like ‘Shake Your Rump’, ‘To All The Girls’ and ‘Hey Ladies’ and were prepared to rap about crime sprees (‘High Plains Drifter’) and egging peoples’ houses (‘Egg Man’).

Snippets of micro-samples of Public Enemy, Beatles and Zeppelin sat alongside pieces of Curtis Mayfield’s ‘Superfly’, Ramones’ ‘Suzy Is A Headbanger’ and Sly & The Family Stone’s ‘Loose Booty’, giving Paul’s Boutique the feeling that the listener is rummaging around a car boot sale of 20th century junk culture. ‘Hey Ladies’ alone stitches together more than a dozen samples, with the rappers taking it turns to barrage the listeners with a cascade of arcane pop-culture references and trash talk. It comes off as a love letter to their native New York City, a place where all cultures and styles intermingle. Ironically, it was something they could only have done with L.A.’s Dust Brothers behind the production desk to arrange the beats in the way that the Beastie Boys wanted.

It’s hard to talk about ‘highlights’, as such, on an album as slick, fast and consistently top quality as this, but the classic single ‘Shadrach’ is one of the very best, with its sampled, soulful horns and female vocals complimenting the tongue-twisting rhymes. ‘The Sounds Of Science’ is split into two distinct parts, one a low-slung country-bumpkin bass stroll, the second an acceleration propelled by a snappy Beatles sample. ‘Shake Your Rump’ uses a bewildering range of ‘70s and ‘80s funk samples; ‘Looking Down The Barrel Of A Gun’ is built on a doom-laden, Nine Inch Nails-style guitar sequence; ‘Johnny Ryall’ tells the tale of a New York homeless man and features two samples from Licensed To Ill, highlighting the Beastie Boys’ irreverent nature – this was how far they were prepared to go to put the past behind them. The masterstroke is the final 12-minute mash-up ‘B-Boy Bouillabaisse’, a song suite consisting of nine sections, in a style similar to The Beatles’ famous Abbey Road cycle, like an album within an album. Jay-Z loved the ‘Hello Brooklyn’ section so much that he made his own reloaded version for release on 2007’s American Gangster (‘Hello Brooklyn 2.0’). It perfectly encapsulates the new Beastie Boys aesthetic: explore an idea for a bit, and discard before you get bored.

Paul’s Boutique was ahead of its time, to the extent that America took a great deal of time to catch up with them. 1992’s Check Your Head wasn’t quite as dazzling in spite of its enjoyable skater sensibilities, and it wasn’t until 1994’s excellent Ill Communication and its associated mega-smash hit single ‘Sabotage’ that the Beasties reconnected with their audience and became mainstream chart stars once more. They set up their own label and magazine – both called Grand Royal – in its aftermath. After the novelty that had powered their debut album’s success, Paul’s Boutique helped re-wire the public’s perception of the Beastie Boys as barometers of cool, from whom other artists and movements from Spike Jonze to the Tibetan liberation effort would gain cultural currency, as Pitchfork again put it.

Its eclectic approach to sonics went on to inform the likes of The Avalanches and their 2000 masterpiece Since I Left You, but more importantly it changed the way hip-hop artists thought about sampling. Not only could it be used merely to gain radio exposure through recycling classic hooks, but the tactic could be deployed in the pursuit of more artistic ends. AllMusic’s Thomas Erlewine describes the album as “painting with sound”, and while that may sound rather grandiose and florid, it’s not too far from the truth. Along with DJ Shadow’s seminal debut …..Endtroducing seven years later, and other East Coast sample-heavy masterpieces like 3 Feet High And Rising and The Low End Theory, Paul’s Boutique turned sampling into a fine art form. While it’s very dense to listen to at first, over time it becomes an album to live with, and to dwell within.

Listen to Paul’s Boutique by Beastie Boys here via Spotify, and tell us what you think below!