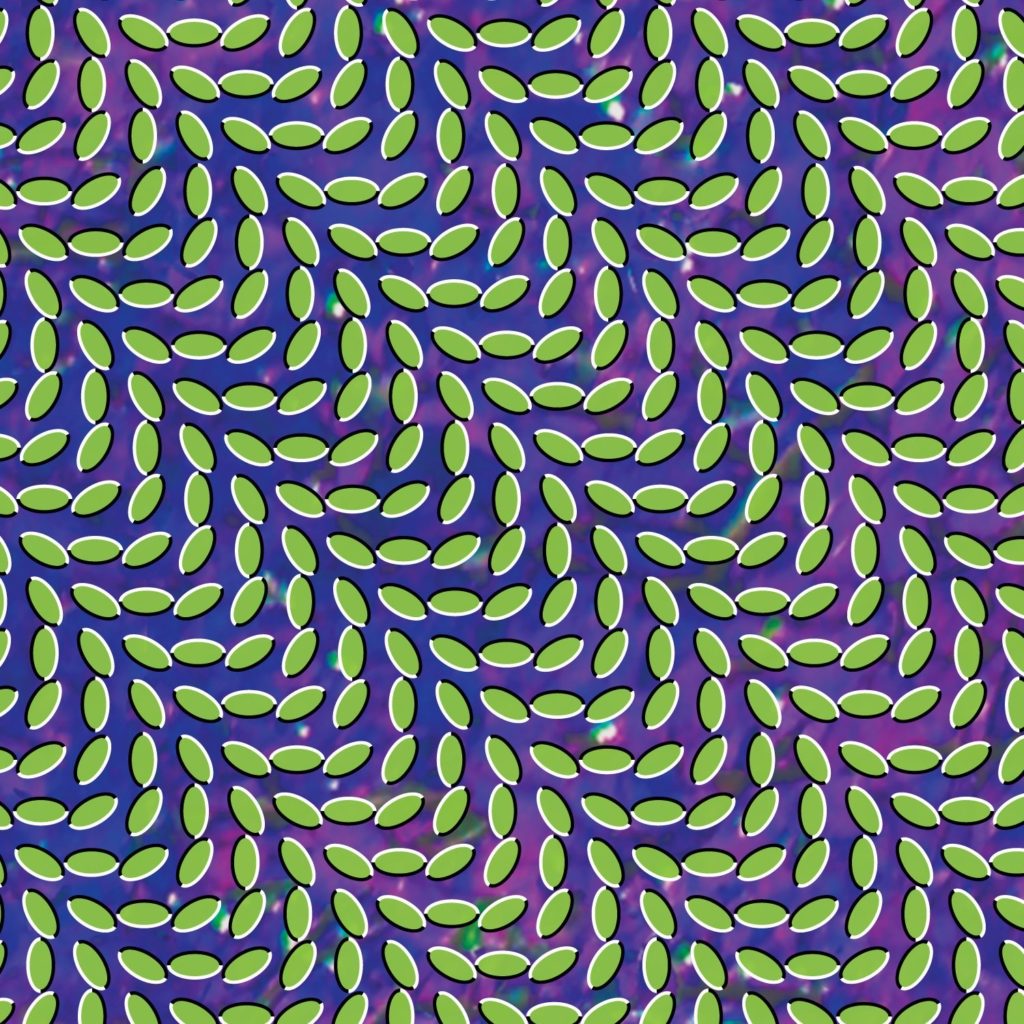 Coming across like a thought experiment imagining an alternate reality in which Brian Wilson was German and fronted a krautrock band, Animal Collective were a startlingly original band during the Noughties, particularly in the context of a decade in which guitar music was largely in thrall to revivalism and hagiography. Although they are formally just a side-project for a bunch of individual Baltimore-based musicians – numbering David Portner (Avey Tare), Noah Lennox (Panda Bear), Josh Dibb (Deakin) and Brian Weitz (Geologist) – their eighth album Merriweather Post Pavilion, released in the first days of 2009, completed the narrative arc that established them as the most important act in alternative music, a Radiohead for their decade.

The comparison with Oxfordshire five-piece works in more ways than one. Dedicating their energies to eschewing conventional structures exploring the boundaries between genres and deliberately blurring indie and pop with psychedelia, krautrock, electronica and other avant-garde sub-genres, it’s fair to say that Animal Collective were critics’ darlings rather than in any way popular. Despite the brilliance of albums like 2004’s Sung Tongs and 2007’s Strawberry Jam, and the array of records made by the band’s individual members, far more words were written about Animal Collective than actually reflected their commercial significance. It’s also fair to say that critics and the online indie fraternity was willing Merriweather Post Pavilion to be the flawless masterpiece that everybody now agrees that it was. On a smaller scale to the expectation surrounding an album like Be Here Now or Tranquility Base Hotel & Casino, maybe, but that sense was nevertheless there for the community to whom Animal Collective meant so much.

The point is, unlike Oasis or Arctic Monkeys, Merriweather Post Pavilion entirely justified all that hype. It really was everything that everybody had wanted it to be, and took Animal Collective from a cult concern – and a distinctly highbrow one at that – to a much wider audience. It was one of those unbelievably rare albums which is abstract, artful and highly inventive but at the same time absolutely accessible and populist in its outlook. Every aesthetic element that had defined Animal Collective’s sound up until that point, from the melodies and interlocking harmonies to the sonic textures and unusual rhythms, was refined and amplified, as the band road-tested the material live before committing it to tape in mid-2008.

From the noise experiments of their very first records in the early Noughties, the pastoral folk jams of Campfire Songs and the technicolour sonic diversity of Feels, Animal Collective had been very gradually travelling in this direction anyway, but what seems to have had the greatest impetus to Merriweather Post Pavilion’s joyous, accessible sound was Panda Bear’s 2007 solo album Person Pitch and its purposefully listener-friendly ethos. Conventional song frameworks had never been a part of the group’s calculations in any case, but recurring passages and loops are deployed in a very pop-orientated way on Merriweather Post Pavilion. The everything-at-once cacophony of Strawberry Jam was trimmed, the sing-song melodies, catchy hooks and driving percussion reconstructed in a way that let the group’s pop soul shine through.

Take the album’s lead single ‘My Girls’, a Panda Bear-driven track that Lennox wrote about his wife and young daughter and his desire to make a home for his family. Its blissful, near-ecstatic vibes set to cascading harmonies and buoyant electronics serves as one of the most beautifully simple expressions of want in pop history. Faintly reminiscent of Frankie Knuckles’ pioneering house staple ‘Your Love’, the musical elements overlap and dissolve into each other. It’s this basic template and ethos that drives much of Merriweather Post Pavilion, as sonic delights tumble out of it one after the other.

The delicate riff of opening salvo ‘In The Flowers’ explodes on the 2:30 mark into a galloping, kaleidoscopic glory of synths, setting the scene for the album’s energetic first half. The propulsive pomp of a beat that underpins ‘Summertime Clothes’ is simply one of the most joyous things ever committed to record, full of handclaps, pinwheeling synths and the uplifting declaration of delight in new love of “I want to walk around with you” serving as a shorthand for the sentiments of the song.

‘Also Frightened’, a hazy recollection of raw childhood emotions, is redolent of the bucolic psychedelia of Syd Barrett-era Pink Floyd, rendered through synthesisers and sequencers rather than wistful acoustic guitars. The droning, shoegaze textures of ‘Daily Routine’ are welded to hip-hop-style beats that suddenly secede to the kind of psychedelic outro in which the ego collapses. Just like the eye-bending artwork created by Japanese psychologist Akiyoshi Kitaoka that adorns the front cover, just as you’re getting to grips with Merriweather Post Pavilion or you’re thinking it’s settling down, it morphs and wriggles out of your grasp, forcing you to re-focus once more.

Over its second half, the record becomes more sedate in its pace and tone – even vaguely conventional on ‘Lion In A Coma’ – but is no less gripping for it. Despite its bass pulses and highly distorted guitars, ‘Bluish’ shares many elements with ‘70s soft-rock; Panda Bear and Avey Tare’s hypnotic, swooping vocals are the highlight of the undulating ‘Guys Eyes’; while the gentle, faintly Lennon-esque piano underpinning ‘No More Runnin’ is like floating in the sea.

Merriweather Post Pavilion finishes with arguably its strongest track, maybe even the single best moment that Animal Collective has ever produced. While it was leaked early via the internet, it had the happily accidental effect of stoking anticipation for the album even higher, as ‘Brother Sport’ is a neon splatter of Afro-Brazilian influences, rave sirens, tribal dreams, incantatory vocals that all reach a kind of centrifugal effect and peak in an ecstatic final movement.

Explaining the massive constellation of influences that informed their masterpiece, Noah Lennox said: “The first thing that swept me away was Top Forty radio, then classic rock radio… then I started getting into dance music, fully electronic stuff like The Orb and Aphex Twin. From there, I went backwards to Detroit and Chicago house music. I also like Daft Punk a whole lot.” And that’s just one of the group’s members!

Indeed, everything about Merriweather Post Pavilion felt like the logical end-point for a group of musicians whose minds were open to every conceivable influence, yet still able to make sense of them and express original ideas in a collegiate, collaborative context. In lesser hands, it could have been a mess of overly ironic references and incoherent music, but with Animal Collective, it was like musical alchemy.

The public – at least, those who were prepared to listen – reacted positively to it. Reaching no.13 in the US Billboard charts on its week of release, Merriweather Post Pavilion has to date sold just shy of 200,000 copies. Animal Collective’s name was now known – they were no longer restricted to the indie ghetto that had nurtured them for so long, and they were now not just the property of online forums. It raced to the top of many critics’ end of year lists for 2009, and registered pretty high on many of those same publications’ end of decade lists at the same time. The subsequent EP Fall Be Kind, cut from the same musical cloth and recorded in the same sessions, was released at the end of 2009 and also got an enthusiastic reception.

Looking back ten years on, while there have been curious and distinctive delights, Animal Collective have never quite scaled the same heights since, or even existed in the same way. They’ve released just three studio albums subsequently, only one of which, 2012’s often lukewarm Centipede Hz, featured all four members of the band. 2016’s colourful Painting With omitted Deakin, while 2018’s Tangerine Reef, recorded in aid of a marine ecological charity, did not feature Panda Bear.

But that’s the nature of a band like Animal Collective. While they may never put together such a stunning run of increasingly brilliant records again, there’s always the chance they’ll return with something as uniformly stunning – but likely completely different – as Merriweather Post Pavilion. In the meantime, we should look upon it as what it is: one of the very best American indie albums of the 21st century.

Listen to Merriweather Post Pavilion by Animal Collective here via Spotify, and tell us what you think below!