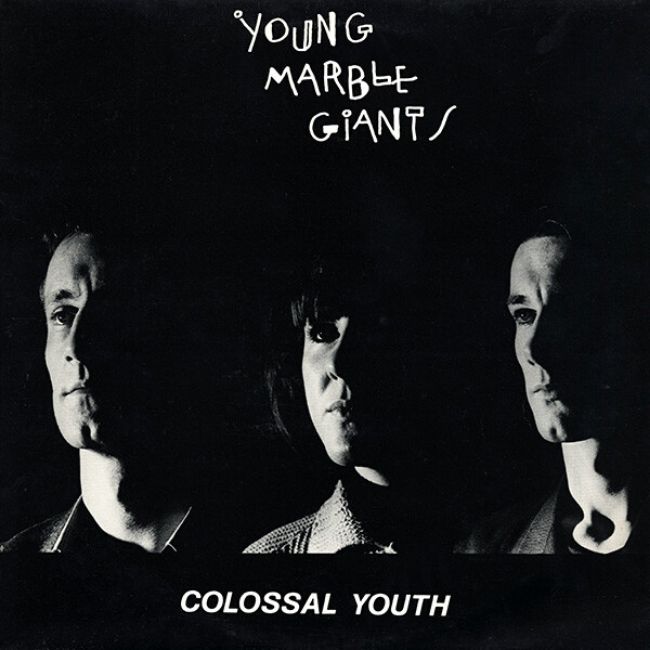 It’s very rare that a band seems to come out of absolutely nowhere to establish a completely new paradigm for thinking about the creation of music. That’s what seemed to happen with the short-lived Young Marble Giants, however. They seemed to appear ex nihilo in two particular respects – firstly, that there were no real antecedents for their sound, and secondly that their home city of Cardiff had no local scene or underground network to speak of that could have buoyed them up in their earliest days. They released their one and only album, Colossal Youth, in February 1980, in addition to a brace of EPs and the odd compilation track, before quietly disbanding. Yet the profound influence it had, and still has four decades later, is testament to the power of ‘word of mouth’, and of punk’s legacy of boosting regionalism in British music.

Emerging from the ashes of a former band called True Wheel, singer Alison Statton and the Moxham brothers, bassist Philip and guitarist / chief songwriter Stuart, formed Young Marble Giants in 1979, at which point they were all barely in their twenties. Their shot at prominence came later that year after Rough Trade heard two of their songs on a Cardiff-orientated compilation showcasing local bands, titled Is The War Over?. Quickly snapped up by the prestigious indie label, Young Marble Giants recorded their debut album over the course of five days in a tiny studio in North Wales.

They self-produced it, despite not having any prior knowledge or formal experience of production, and while that shows in many places, it’s a huge part of what lends Colossal Youth its appeal. With an overriding aim of simplicity in mind, the band experimented with effects devices such as ring modulators and reverb units. They built up the songs’ percussion from tape recordings of a home-made drum machine constructed by Peter Joyce, a cousin of the Moxham brothers and the band’s fleeting fourth member in their early days. In many cases, first takes were used, with the only two overdubs on the entire record being a slide guitar on ‘Include Me Out’ and distorted vocals on ‘Eating Noddemix’.

The first thing that strikes you when listening to Colossal Youth, or any Young Marble Giants output, is how completely sincere and unsentimental it is in its understated beauty. Post-punk had always made use of the contrast between loud and quiet, but Young Marble Giants were one of the first to actively bring the concept of negative space into play, to make the listener actively have to lean in and feel like they’re eavesdropping on a secret. From the opening track ‘Searching For Mr Right’, which consists of a tremulous, heartbeat-like pulse tapped out on dampened electric guitar strings as a rhythmical device, the basic format barely shifts over the album’s 15 tracks and 38 minutes. Sometimes, Young Marble Giants create beautiful and restful backdrops from organ sounds (‘N.I.T.A.’ and ‘The Man Amplifier’), and on others such as the restless ‘Constantly Changing’ or the ghostly swirls of ‘Wind In The Rigging’, they’re a lot more intuitive, sometimes sounding like they’re jamming these sounds out in the studio for the very first time, but they do everything with the same ruthless sense of economy.

As such, they stood in stark contrast to virtually the entirety of the rest of popular and alternative music in 1980, where a premium was placed on generating volume. Accompanied by the chintzy tick-tocking of a primitive drum machine that sounds like it’s had a blanket thrown over it, the musical landscape is delicate and extremely sparse. Stuart Moxham rarely does anything more than dab and flick at his guitar, with the amplification of the strings serving a rhythmical function that’s just as important as the notes he’s playing; his brother Philip Moxham’s bass guitar is often the most prominent instrument, but it pulses sparingly and is often left to echo and fade away.

But their most effective weapon is Alison Statton’s hushed lead vocals, which dovetail so neatly with the Moxhams’ soundscapes and yet are delivered so ambiguously and straight-faced that you have to work hard to detect the anger and wit underneath. It meant that Young Marble Giants’ aesthetic of silence being as meaningful as noise was intelligently reflected in their songs’ lyrics. Tracks like ‘Include Me Out’ and ‘Credit In The Straight World’, in lyrical terms, are the kind of songs you can imagine a more typical post-punk band performing – the former, with its slashed riff, coming off like some Nuggets-esque garage-rock song, and the latter, concerning the irreconcilable tension between alternative culture and the mainstream, a highly incisive and political track. But what was novel with Young Marble Giants is that this was a novel way of expressing anger, normally associated with volume in the rock idiom.

Aside from the extant political anger directed at Britain’s embrace of Thatcherist monetarism at the dawn of the Eighties, the other core theme of Colossal Youth seems to be one of lost innocence. It runs through the album like a stick of Brighton rock, expressed through Statton’s resigned and yearning vocals, through track titles such as ‘Salad Days’, even in the band’s name (‘young’) and the record’s title (‘youth’). Even the album’s aesthetic of leveraging the maximum emotional clout from the absolute minimum of musical ingredients seems to echo the way in which we play when we’re young, using our imaginations to fuel adventures. Appropriate, then, that Young Marble Giants only ever made one album, calling it quits later in the same year as their debut’s release, with the release of the quietly apocalyptic ‘Final Day’ single in June and the entirely instrumental, six-track Testcard EP in March 1981, several months after their official split.

At a time when much of post-punk was earnest and idealistic, wearing those aspects on their sleeves, Young Marble Giants surprisingly became Rough Trade’s second-biggest sellers, with the album and the ‘Final Day’ single both reaching the Top Three of the respective UK indie charts. With its unsettling one-note synth whine and nonchalant lyrics reflecting society’s fear of the nuclear bomb (“when the light goes out on the final day / we will all be gone, having had our say”), this stand-alone single would form a tentpole for Rough Trade’s circa-1980 compilation Wanna Buy A Bridge?, which remains a key post-punk document to this day. The YMGs themselves found individual success as parts of other bands: Stuart Moxham (who formed The Gist) and Alison Statton (Weekend) fronted other groups, and Philip Moxham playing bass temporarily for Everything But The Girl and The Communards. They have sporadically and very briefly reformed for special gigs on four separate occasions since 2003, but have not recorded any new material together.

While it has always sounded out of step at every point at which it’s been re-issued – in 1990 at the height of Madchester, and in 2007 (as a deluxe, chapter-and-verse edition of demos and Peel sessions) when Arctic Monkeys reigned supreme – Colossal Youth has also never sounded dated. Its influence has been indirect and took a long time to be felt, but it left a huge legacy in terms of the DIY ethics that hold sway in the indie underground, on both sides of the Atlantic.The minimalist production and intimate ambience generated and the Moxhams, as well as Statton’s half-detached lyrics about robots, science fiction and train crashes presaged today’s bedroom pop, from the diary-like monologues of The xx to the deliberately truncated song sketches of Frankie Cosmos, and countless dozens of artists in between.

Listen to Colossal Youth by Young Marble Giants here via Spotify, and tell us what you think below!