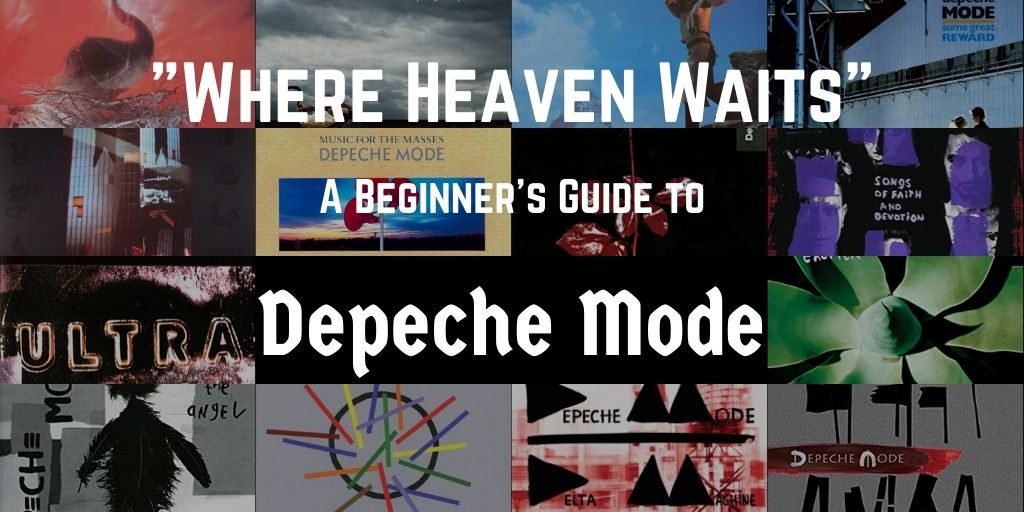 When bands achieve a certain level of fame and exposure, it becomes hard to know which direction to go in. Do you double down on the formula that brought you that fame to try to retain your fanbase as you go forwards, or do you change things up to avoid being pigeonholed? Few artists actually hit these rarefied peaks of commercial success and genuinely have to answer this question. Of those that do attempt to do so, not all of them manage to sustain their popularity, and even fewer manage to keep pushing themselves in creative terms while maintaining it. Depeche Mode have been doing it for so long by this point that it’s easy to take them for granted, but they represent a textbook case study in the art of being famous pop stars.

True, it’s seemed for a long time that they’re now just churning out albums every four years so they can go out on tour again and rake in millions. Firstly, though, they’ve earned it, and secondly, their latter-day albums (mostly) aren’t merely marking out time. Martin Gore and Dave Gahan have never lost the knack of crafting dark yet catchy pop songs, and while they may not be quite as consistent as they once were, the likes of 2017’s Spirit – at the time of writing, their most recent album – contain some of their most urgent and vital tracks in many years.

The commercial and creative high water-mark for Depeche Mode, however, was at the moment the Eighties turned into the Nineties. Having been chart mainstays in their native Britain and mainland Europe for many years before crossing over into the American mainstream, where they had been earmarked as a new-wave-inspired college rock outfit, Gore’s lyrics smuggled some of the most darkly subversive subject matter that prime-time radio had ever heard, and ones which in some parts of the world became a catalyst for profound social change. For instance, countless testimonies from fans across Eastern Europe, still under communist rule at the turn of the decade, confirm that Depeche Mode became a marshalling point for resistance and for underground, anti-authoritarian spirit. A massive coalition of people from all kinds of walks of life could identify with the band’s aesthetic and imagery, and with Gore’s lyrics that ranged from religion, sex and politics (and even sexual politics) to more introverted reflections on loneliness.

Depeche Mode was formed in Basildon, Essex in early 1980 when singer Dave Gahan was recruited by instrumentalists Vince Clarke, Martin Gore and Andy Fletcher, the three of whom had gradually coalesced over the previous three years playing in an array of synth-inspired bands. Naming themselves after a French fashion magazine whose title translated as ‘fashion report’, things happened quickly for the fledgling band. They found a temporary home on the Some Bizzare imprint and recorded their first demos, before reaching a handshake agreement with Daniel Miller’s independent Mute label and releasing their debut single, ‘Dreaming Of Me’, in December that year. 1981 brought significant chart success, with their next singles ‘New Life’ and ‘Just Can’t Get Enough’ reaching no.11 and no.8 respectively in the UK.

October that year saw the release of Depeche Mode’s first album, Speak And Spell, an impressive commercial success as well. But primary songwriter Vince Clarke was growing wary of the group’s direction, and just a month later announced his departure, going on to form Yazoo with Alison Moyet and then synth-pop titans Erasure with Andy Bell, establishing him as one of the Eighties’ most prolific and successful pop writers. This left Depeche Mode in what initially looked like a terrible position, with their chief creative hub gone and Martin Gore suddenly forced into sole songwriting duties, only having written two tracks for the group by this point, one of which had been an instrumental.

But the experience steeled the band, and they were determined to make it without Clarke’s considerable talents. Depeche Mode’s first single as a trio, ‘See You’, outperformed all of their previous singles in the charts, and 1982’s A Broken Frame showed them tentatively defining the terms of their new existence. They recruited a second keyboardist, Alan Wilder, in early 1983, someone who was to be hugely influential in shaping their future aesthetic direction, and later that year released the impressive Construction Time Again, a record that saw them experiment with technology to an extent that many of their contemporaries were not. It also yielded the huge hit ‘Everything Counts’, which remains in Depeche Mode setlists to this day.

1984’s Some Great Reward saw the group continuing to evolve, away from the melodic, teen-orientated pop of their first releases and towards something darker and deeper. Its lead single, ‘People Are People’, became a massive pan-European hit. Their first hits compilation, Singles 81->85, provides a great document of this gradual transition, but it wasn’t until 1986’s Black Celebration that the new aesthetic would become fully fleshed out. America, which had been ahead of the curve in how they perceived Depeche Mode in comparison to the UK and the rest of the world, where the band was snobbishly written off as teen idols, went for Black Celebration in a big way. Highly textured and atmospheric, this gothic, industrial pop album laid the foundations for the template that Depeche Mode have, more or less, followed ever since.

Their next album, 1987’s Music For The Masses, travelled even further in this direction, and the corresponding mammoth world tour culminated in a huge, 60,000-capacity gig at the Pasadena Rose Bowl, documented in the D.A. Pennebaker concert film 101 the following year. At the same time, Depeche Mode had established huge followings in Eastern Europe, performing in many then-Communist countries where Western groups were not usually allowed.

Depeche Mode’s next album, Violator, was where all the hard work paid off. Considered their artistic zenith, it was a colossal success in commercial terms too, selling nearly five million copies in the U.S. and yielding two global hit singles in ‘Personal Jesus’ and ‘Enjoy The Silence’. The latter won the BRIT Award in 1991 for Best British Single, and well over a million people saw the world tour that followed. For a short time, Depeche Mode were the biggest – and arguably best – band in the world. Despite often not finding favour with the rock critics, more often in columns of Smash Hits in their early years, Gore had willed himself to greatness, earning the group a fanbase because of his knack for a melody and his tendency to tackle subjects a few shades darker than those melodies might suggest.

It didn’t last too long, however, as the group was beginning to show signs of serious internal strain under such pressure. 1993’s well-received Songs Of Faith Of Devotion took inspiration from grunge, at that point the new fashion in alternative rock, but the following world tour took its toll, famed as one of the most debauched tours in music history and which took in an incredible 159 performances over 14 months. Dave Gahan was so ravaged by heroin that he required cortisone shots simply to get on stage and perform; Martin Gore struggled with alcohol and suffered two stress-induced seizures; Andy Fletcher suffered a complete nervous breakdown and had to be replaced mid-tour with the band’s P.A. Daryl Bamonte; and Alan Wilder announced in the summer of 1995 that he was quitting Depeche Mode, feeling his role had been undervalued. Reconvening to record once again in early 1996 as Gahan commenced a rehab programme, Gore very seriously considered breaking up the band.

In this context, it’s a miracle that 1997’s Ultra even came to pass, let alone that it ended up being as good as it was. Influenced by hip-hop rhythms and contemporary electronica, it housed some of their finest singles, notably the serene ‘It’s No Good’. The group elected not to tour Ultra, however, focusing on getting better and going to ground to plot what stands as their most ambitious record to date. Exciter, released in 2001, was orientated around IDM, glitch and techno, highly modern and a drastic departure from the gothic, heavy and dark music that had established their fame and which divided their fanbase.

Following solo albums for both Gahan and Gore in 2003, Playing The Angel was a corrective, in this context, centred around stadium-filling electronic rock and gothic pop. Notable for ‘Suffer Well’, the first Depeche Mode single to be written by Dave Gahan, the resulting world tour in the mid-Noughties saw them re-connect with their fanbase in a way they hadn’t since the early Nineties and proved to be the most enjoyable live shows the band had ever done, in Gahan’s words.

Since then, Depeche Mode have essentially hardened into a dependable musical institution. They’ve released three more studio albums – Sounds Of The Universe (2009), Delta Machine (2013) and Spirit (2017) – which are the acts of a band who know their audience and deliver what’s expected of them: entertainers, in the proper sense of the term. Every four years, with the regularity of elections or international sporting competitions, they release an album of reliable quality, roll through your part of the world and put on one hell of a show, then retreat to do it all again. While that might strike some as conservative or lazy, it’s more that Depeche Mode are now a band that’s happy with its place in the landscape, having endured more than their fair share of travails and traumas over the years and earned their megastardom the hard way, but have come too close to losing it all to raise the stakes too high ever again. Besides, if you were going to rest on your laurels, you’d want to do so as the most successful electro-synth act of all time.

That every single one of their studio albums have charted in the UK Top Ten, along with no fewer than 35 singles hitting the UK Top Twenty, is testament to their impact on the public’s consciousness. But then, of course, there’s their incredible influence and resounding legacy. Virtually every single stadium-sized modern act you can think of that at least involves synthesisers and/or guitars – from Muse and Arcade Fire to Lady Gaga and La Roux, even Rammstein – has been influenced to some extent by Depeche Mode, and the gravitas, grandiosity and power they can generate in a live context.

To mark their 40th anniversary of their formation in 2020, here’s a Spotify playlist offering a brief overview of Depeche Mode’s career, with a brief whistle-stop guide to their 14 studio albums on the next page [scroll below].