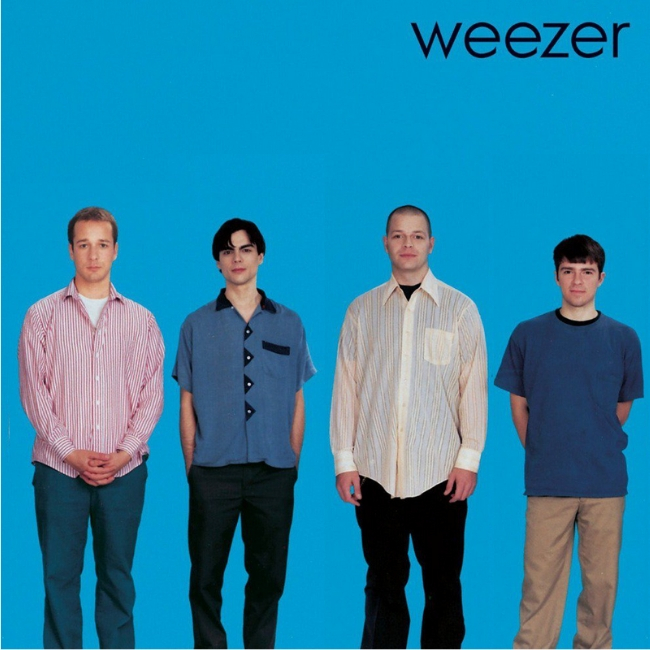 It’s been written about to death at this point, but it’s still difficult to truly emphasise how baffling Weezer’s career has been. After tearing up the alternative rock rulebook in the mid-1990s with their self-titled debut album (popularly known as ‘The Blue Album’) and its follow-up Pinkerton two years later, their output since then has been inconsistent at best, and embarrassing at its ultimate worst. It’s a nosedive that’s divided their fans to such a notorious degree, it even inspired a ‘Saturday Night Live’ sketch in which Leslie Jones and Matt Damon aggressively debate the band’s relevance beyond their first two albums. Weezer have been criticised for a myriad of things since then, whether it’s the overtly goofy nature of some of their songs (looking at you, ‘Beverly Hills’) or their tendency to try too hard to capitalise on popular trends (see the entirely pointless ‘Teal Album’). However, while the charm and raw emotion that made Rivers Cuomo and co. so likeable has largely dissipated, it can also be argued that with those first two albums, they set a bar that they could never realistically continue to hit.

Pinkerton is a fascinating insight into Cuomo’s psyche, but to me, ‘The Blue Album’ encapsulated everything that was special about Weezer in the first place, and the reason why so many fans cling onto the belief that they might just have another great album in them, despite overwhelming evidence to the contrary. Its greatness becomes more obvious when you consider the musical landscape in the year it was released. By 1994 – the year ‘The Blue Album’ was released – bands from the Seattle grunge scene had exploded onto the mainstream, while in the UK, Blur, Oasis and their ilk were beginning to ushering in Britpop’s chart domination. Alternative rock had never been more popular, but with their charming power-pop hooks and their innate nerdiness, Weezer stood out in their own peculiar way.

It’s no surprise, given Cuomo’s unconventional background. Having been raised in an ashram, he spent most of his childhood isolated from the rest of the world until he went to public school, where he and his brother Leaves were regularly bullied. But throughout his early life, music would offer him the escapism he craved. Cuomo listened to Kiss’ Rock And Roll Over in 1977, a moment which he describes as having “directed the course of his life”. From there, his tastes broadened; his love for The Beach Boys and The Beatles developed whilst he was in the 7th grade, and he encouraged his parents to buy him a guitar for his 14th birthday after becoming enamoured with heavy metal. Cuomo then began working for Tower Records in Los Angeles, at a time when Pixies and Nirvana were shaping the future sound of rock music. These experiences laid the foundation for Cuomo’s angst-ridden songwriting, and gave Weezer a sound – surging riffs, euphoric guitar solos, playful vocal harmonies – that was grounded in the past, but felt entirely fresh at the same time.

The band initially found it difficult to attract the attention Cuomo desired, but they eventually signed to DGC Records in the summer of 1993. Studio sessions for ‘The Blue Album’ soon followed, with Cuomo choosing The Cars’ frontman Ric Ocasek to handle production duties. It was a choice that made perfect sense: Cuomo expressed his admiration of The Cars and Ocasek, who themselves were pioneers of vibrant, punchy pop-rock in the late 1970s and early 1980s. Ocasek lending his wizardry to ‘The Blue Album’ symbolised a passing of the torch in that sense, and it combined magnificently with Weezer’s unique energy. It’s evident right off the bat with ‘My Name Is Jonas’, which after the opening acoustic jangle, explodes into a triumphant burst of colourful guitar work and fist-pumping hooks, with added harmonica towards the end to reaffirm their off-kilter identity. The same goes for ‘Surf Wax America’, a gleeful send-up of surfing culture that mirrored the pop-punk sound that was starting to grip the mainstream at the time.

Despite ‘The Blue Album’s generally uplifting sound, Cuomo’s lyrics (most of which were based on personal events) added a layer of vulnerability which permeates through each of the 10 songs. Pinkerton is famous for capturing Cuomo at his darkest, but ‘The Blue Album’ often packs an equally devastating punch (it’s really no surprise that its often credited for popularising emo). On ‘No One Else’, he plays the role of a jealous, paranoid boyfriend (“I want a girl who will laugh for no one else/When I’m away she puts her makeup on the shelf”), but on companion piece ‘The World Has Turned And Left Me Here’, he struggles to come to terms with the breakdown of his relationship in heart-breaking fashion. It could certainly be argued that there’s a toxic element to Cuomo’s character on ‘No One Else’, but along with ‘The World Has Turned…’, there’s an underlying fragility that only reveals itself more with each listen.

‘In The Garage’ meanwhile was clearly written with Cuomo’s high-school bullies in mind. A touching tribute to the band’s early rehearsal space, it was a song that spoke to nerds far and wide, playing upon Cuomo’s own geek status with references to Dungeons & Dragons and various comic book characters, while emphasising the importance of the garage as a place where he can happily be himself without being judged (“In the garage, I feel safe / No one cares about my ways”). Conversely, his comfort in his own skin is completely diminished on ‘Undone – The Sweater Song’ as he crumbles under the weight of his social anxiety (“Watch me unravel, I’ll soon be naked / Lying on the floor, I’ve come undone”). The first single taken from the album, it begins slowly with a moody, Pavement-esque riff before giving way to an enormous solo, closing with a piano sequence that unravels just like the song’s metaphorical sweater.

Then there’s the other two singles, which remain Weezer’s crowning achievements. Famed for its cutting-edge, ‘Happy Days’-themed music video, ‘Buddy Holly’ was an instant hit reaching no. 12 in the UK Charts, and was later named in both Rolling Stone and NME’s greatest songs of all-time lists. It struck the perfect balance between dark, silly and intensely melodic, with the quirky keyboards, Cuomo’s hilariously hapless lyrics (the “What’s with these homies dissing my girl” line is knowingly cheesy but downright funny with its false bravado), and the joyful chorus contrasting with the hints to the 1992 Los Angeles Riots that devastated the Korean community residing in the city. ‘Say It Ain’t So’ plays it much straighter; based upon Cuomo’s fear that alcoholism was consuming his step-father, the emotion-drenched lyrics align perfectly with the song’s loud/quiet dynamic and the monstrous guitar solo that echoes his crippling despair.

‘Only In Dreams’ wraps things up emphatically. At eight minutes long, there’s an obvious risk of tedium setting in, but that never arrives. Matt Sharp’s iconic bass riff provides the groundwork for Cuomo to pour his heart out, and the pain resulting from his unrequited love is palpable here. Its amplified by the dramatic crescendo that the band so wonderfully build up to; Cuomo shreds his guitar as if his life depends on it, backed up tremendously by the ferocity of Patrick Wilson’s drumming. It’s quite simply one of the greatest finishes to an album of all time, and a fitting conclusion to one of the most significant rock albums of the Nineties.

‘The Blue Album’ was a bona-fide commercial and critical success, appearing on a spate of “best-of” lists and achieving triple platinum status in 1998. Despite some of the dreck Weezer have released since, the legacy of that debut has never been questioned. Cuomo (spectacles and all) and his bandmates weren’t archetypal rock stars, but that was the key to ‘The Blue Album’s timelessness. By amplifying their oddities and confronting their sadness head on, Weezer endeared themselves to generations of outcasts, and ensured ‘The Blue Album’srightful place in rock music folklore for years to come. (Matty Watkin)

Listen to Weezer (The Blue Album) by Weezer here via Spotify, and tell us what you think below!