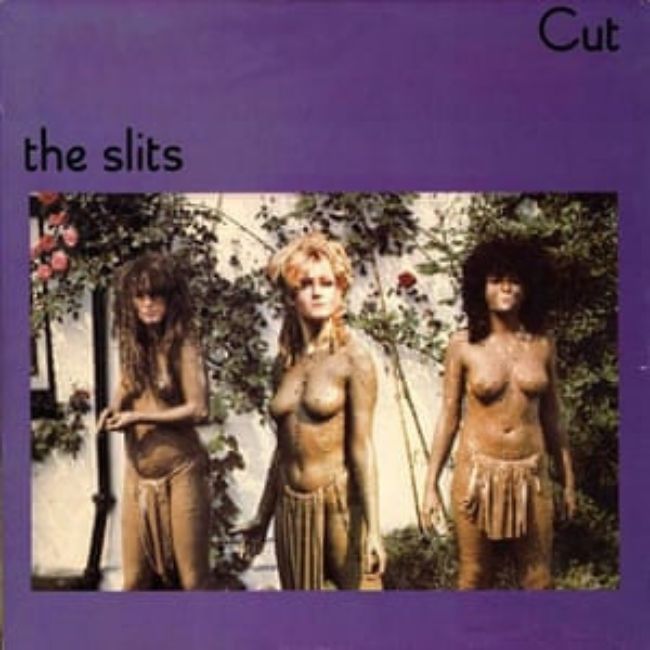 The first time you pick up a copy of Cut, the icon(oclast)ic debut album by The Slits, you’re immediately struck by its front cover of the band staring back at you. Caked in mud, breasts out and wearing only loincloths, the female trio look like some National Geographic image taken in some far-flung corner of the world. You’re on the outside, looking at them like a kind of strange, exotic long-lost tribe. But far from being exploited, the group were presenting themselves to the world on their own terms, simultaneously putting on display their punk attitude and their confrontational brand of feminism.

A bit passé in 2019 maybe, but in the context of forty years ago, it was a bold thing to have done. Even though it was two years since the shock of punk’s detonation and major labels were very much on the lookout for punk bands on their roster, this was still a very conservative music industry (and society) that The Slits had to operate within. Guitarist Viv Albertine has subsequently recalled on many occasions that the group were often spat at, verbally abused and assaulted in the streets. But this was the extent to which The Slits were determined to retain their identity as they dealt with the machinations of the industry.

Some might argue that that image is more influential and impactful upon pop culture than the music contained within Cut itself. Which is kind of true, given that the album yielded nothing in the way of real hits. But punk has always been underpinned by the D.I.Y. ethos, and the belief that, in all walks of life and not just music, choosing your own path is preferable to following the herd. Looked at from this perspective, Cut is arguably more relevant in 2019 than an album like, say, London Calling or Entertainment!, whose sounds have long since been devoured and blandly regurgitated by pale post-punk revivalists like The Libertines.

Formed notionally in late 1976 when a then-14-year old Ari Up (singer) met original drummer Palmolive at a Patti Smith gig in London, the core of the line-up was cemented when Viv Albertine and bassist Tessa Pollitt later joined. By September of 1979 when they finally got to release their debut, The Slits had had plenty of time to hone and perfect their originally unpolished sound, supporting The Clash on two tours and playing alongside the likes of Buzzcocks, Subway Sect and The Prefects – although their live power was captured for posterity in various Peel Sessions during 1977 and 1978 (available on subsequent deluxe re-issues of Cut).

Furthermore, although it’s an album that many (rightly) hold up as an important cornerstone of the genre, Cut is much more fun than the weighty gravitas bestowed upon it by subsequent generations of music writers might make you think. Virtually every single aspect of the music itself, and the nature of its delivery by The Slits themselves, was a revelation. Aided by the careful and inventive production of Dennis Bovell (guitarist of British reggae act Matumbi), it was characterised by overt dub influences and a jittery, unsettled take on punk. Viv Albertine’s needling, self-taught style of guitar playing interacts with the rhythm section of Pollitt and Peter ‘Budgie’ Clarke, who had by now replaced Palmolive on drums. Most distinctive of all was Ari Up’s phenomenal vocal performances, somersaulting between affected, faux-operatic intonations and taunting, sing-song delivery.

As a unit, The Slits are formidable throughout Cut, from the raw skank of ‘Instant Hit’ to the exuberant yet controlled delivery of ‘Adventures Close To Home’. The insistent scratchiness of ‘Shoplifting’, with its hilarious refrain “do a runner!”, lays bare the group’s first-wave punk origins, while the downbeat, groove-focussed ‘Newtown’, in which Bovell uses spoons and matchboxes as percussion elements, and the squidgy bass and twisted funk of ‘Ping Pong Affair’ shows the diversity of musical situations to which they could apply their skills. The playground chant-esque aesthetic of ‘FM’ showed that punk could be playful and didn’t have to be earnest in its political stance. Thematically, The Slits express their confrontational politics in the anti-macho call-and-response of ‘So Tough’ (apparently inspired by observing the rivalry between Johnny Rotten and Sid Vicious) and dubby, thrashing anti-consumerism anthem ‘Spend Spend Spend’.

The highlight is unquestionably ‘Typical Girls’, which turned out to be The Slits’ calling card. Selected as a single after a battle with their label Island, who wanted their agreeably deconstructed cover of ‘I Heard It Through The Grapevine’ to be the lead-off, it showcase all of the pop and avant-garde sensibilities of the band in one go. Mixing up spiky blues and warped reggae in vari-speed rhythms and topping it off with a rolling piano riff, the pleasant and abrasive elements contrast wonderfully, feeling coherent despite all of these theoretically competing aspects. It’s also a treatise on fighting against pre-set gender roles determined by the needs of capitalist society, exhorting women to look beyond a magazine-defined agenda of beauty that reinforces anxiety over appearances (“spots, fat and natural smells”) and aspirations (“typical girl gets the typical boy”). When Ari sings “Who invented the typical girl? / Who’s bringing out the new improved model?”, it’s establishing a fightback that generations of subsequent female artists have embraced. While it only peaked at no.60 in the UK, the influence of ‘Typical Girls’ was in demonstrating how women could assert their own identities and agendas in a music industry that was very far away from being set up to assist them.

Following the release of Cut, The Slits formed a musical alliance of sorts with Bristol’s wildly experimental The Pop Group, sharing a drummer with them in Bruce Smith and releasing a split single, before delivering their second LP Return Of The Giant Slits and promptly splitting by the end of 1981. However, they reunited in the mid-Noughties under Ari’s aegis, releasing an EP and an album Trapped Animal in 2009 as well as touring with The Cribs and Sonic Youth, before her death from cancer in 2010 effectively put an end to The Slits. Their extraordinary career path, while short and interrupted, has been an inspiration to countless artists subsequently.

The same can be said for the entire album itself. Cut is a living, breathing document forty years later, immediately influencing the likes of The Raincoats, through to Nineties bands such as Hole and Sleater-Kinney and modern-day artists on both sides of the Atlantic, like Merrill Garbus’s Tune-Yards, or Rachel Aggs’s bands Shopping, Sacred Paws and Trash Kit. Cherry Red’s 2016 compilation, Sharon Signs To Cherry Red, is a brilliant dive into the kind of DIY, female-led scene that existed in Britain in the early to mid-Eighties, many of the artists taking cues directly from The Slits and the short, intense trail they blazed. Ari Up’s holler and warble unmistakably informed Björk’s vocal style, and the visual aspects of how they presented themselves have informed female performers from Madonna and Lady Gaga in the pop world to Karen O in the indie scene.

Listen to Cut by The Slits here via Spotify, and tell us what you think below!