WOMEN IN ROCK no.7: Viv Albertine 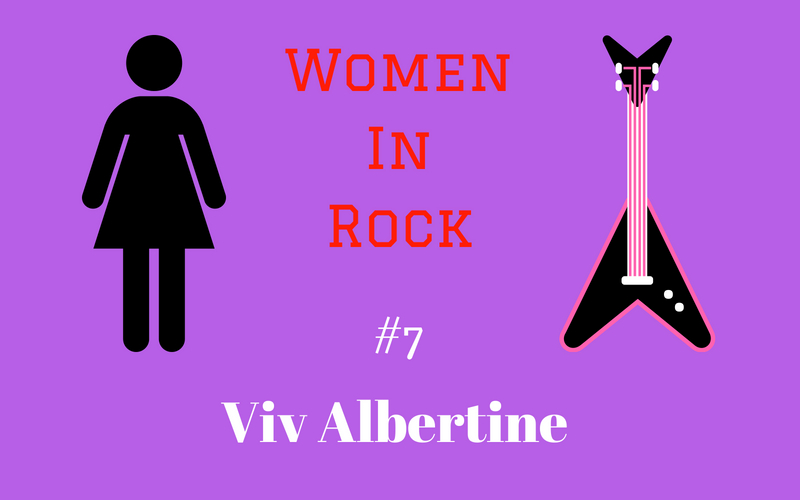 It has been a while since our last Women In Rock profile, so it makes sense to come back with a bang and profile none other than the legendary Viv Albertine. Viv is best known as the guitar player from the iconic, all-female punk band The Slits. However, she’s more recently enjoyed success as a solo artist, but perhaps more so as a writer. Viv’s first book Clothes, Clothes, Clothes. Music, Music, Music. Boys, Boys, Boys. was published in 2014, offering a fascinating insight into her life, and possibly the greatest account of the London punk scene from somebody who was at its very core. Her second book To Throw Away Unopened was published in April of this year.

The Slits are one of the most important, and indeed most interesting, bands to have emerged out of the first wave of punk in the 1970s. With this in mind, it seems truly bizarre – and pretty goddamn shameful – that they often seem to be forgotten about when recounting the history of London punk. In an era where women were destined to grow up to become wives, mothers, and teachers, The Slits broke the mould and set out to prove that they were certainly not ‘Typical Girls’. The Slits pushed boundaries in every way they could – image, sound, style, attitude – of course they weren’t the only women in punk at this time, but even to this day, there’s not been anybody quite like them.

So how is it that a band so important to punk seem to have been written out of its history – or at least the way the history of punk is traditionally told? Before The Slits, Viv was the guitarist in the infamous band that never was (but kind of was) The Flowers of Romance, alongside Sid Vicious, Keith Levene (later PiL), and Palmolive (The Slits and later The Raincoats). She was also a close friend of Mick Jones and Joe Strummer of The Clash, with The Slits supporting them on their 1977 White Riot tour.

However, Albertine often speaks about how The Slits weren’t taken seriously at the time, and it is with her first book that she rightfully writes herself and The Slits back into punk history (or herstory). It is unfortunately all too common that women have to fight for the recognition that they deserve, even when it comes to punk, a movement built on ideas of freedom and inclusion. A great illustration of this long-standing bias was the 2017 Punk London exhibition at the British Library, celebrating 40 years of punk and the iconic bands that came with it. Sadly, it did not include a single band with any female members. Thankfully Viv showed up with a marker pen and added on The Slits, X-Ray Spex, and Siouxsie & The Banshees.

With hindsight, it seems almost inevitable that Viv would end up as a key figure in the punk scene. She grew up on a council estate in north London with very little money and an obsession with music. She cites Yoko Ono as one of her first major influences, describing her as “a girl being interesting and brave”, and later falls for Patti Smith. Under the influence of avant-gardist women and androgyny, it seems only natural that Viv would end up joining a band that were concerned with deconstructing gender norms and defying established codes of femininity.

Viv speaks often of the anger that she has carried with her for her entire life – and I am here willing to wager that she embodies Lydon’s ‘anger is an energy’ mantra better than anybody else in music – and so punk provided the perfect platform for Viv to properly put this anger out into the world. At her recent talk at The Wardrobe in Leeds, Viv claimed that, if it hadn’t have been for music when she was younger, and writing when she was older, that she would have been a murderer.

The Slits’ guitar sound is a great example of punk’s DIY ethos. She taught herself to play after becoming infuriated with the way that Joe Strummer tried to teach her, and ultimately produced the authentic Viv Albertine sound. It is this authenticity of sound that makes The Slits’ music so recognisable, and that makes Cut one of the greatest debut albums in the history of music. The Slits were very concerned with how they came across, not in a narcissistic sense, but in terms of what it was they were communicating. They had frequent discussions of the way that they would present themselves on stage, Viv claims that on stage The Slits were warriors – not entertainers.

In this way, The Slits intentionally distanced themselves from the conventional pretty lady singers of the time, instead choosing to confront their audiences head on with a spectacle of absolute fearlessness and subversion of what it means to be female. And although the response was not always positive – far from it, as they were often attacked, threatened with rape on the streets, and their singer Ari Up was stabbed twice – this arguably demonstrates how successful their subversion actually was, they had pushed themselves so far away from convention that they had become something that men absolutely could not understand, and instead their confrontation made men feel threatened.

Authenticity is a recurring theme when it comes to Viv Albertine. Surely this is the very least that we can expect from an artist, but it doesn’t necessarily mean that it is what we get with many musicians. However, Viv speaks often of how there is no point in doing anything that isn’t honest, and her books are perhaps the greatest example of this. Not only are they full of the truth, (genital) warts and all, but she writes like she speaks. Her voice is unquestionably authentic. Viv’s written style is not afraid to sacrifice her likeability for the sake of honesty.

Her first book deals with what it was like to grow up in the ‘60s and ‘70s, during and before punk, and what happened after the disintegration of The Slits. Viv offers an open and frank account of living through cancer, IVF, and a failed marriage. She stresses the importance of failure, and has often stated that this book was written with young girls in mind. Her next book follows on and deals with the death of her mother, motherhood and becoming estranged from her sister, and attempts to follow her anger. To Throw Away Unopened was originally going to be a fictional book about a woman that murders people, but as she continued to write it, Viv realised that the angry woman that she was writing about was herself.

Viv began her solo career in 2009, and her debut solo album The Vermilion Border was released in 2012. The album is another great example of Viv’s honesty, but also of her tongue-in-cheek humour. A full 33 years after Cut, Viv was still using music to question what it meant to be a woman – expressing her disdain for domesticity in tracks such as the brilliant ‘Confessions of A MILF’. The song is both hilarious and heart wrenching in equal measure, jumping from lines such as “I peel the potatoes, there’s not much else to do, lovely lemon drizzle cake, heat up the fondue” to “no love in my home, no fun in my home, I don’t want to go home, don’t make me go home, ‘cause I hate my home”. There is still in an inherent presence of The Slits on The Vermilion Border, but more grown up, and definitely more humorous. A particular highlight being the last four words of ‘Still England’ – the last four words of the album – “tosser, wanker, nutter, cunt”.

Viv is a seriously remarkable woman, who has had an equally remarkable career. Despite her professed hatred of the idea of ‘legends’, it is undeniable that she is one. Viv and The Slits paved the way for women in punk and alternative music, with Kathleen Hanna of Bikini Kill citing The Slits as a huge influence. That legacy continues further in her books (and her graffiti at the British Library) as she re-writes women into music history and continues to remind us of a woman’s right to be angry. Everything that she has ever put out into the world is worth taking the time to indulge in, whether it is her music, or her books (although to be honest, if you haven’t already, you might as well buy it all because by the time you’re done with one thing, you’re gonna need the rest of it) and we urge everybody to do so immediately. We’re not lying when we say that the world is a better place for having The Slits, Cut, and Viv Albertine in it.

Check out an ‘Introduction To’ playlist of Viv Albertine and The Slits here via Spotify!