WOMEN IN ROCK no.3: Kathleen Hanna 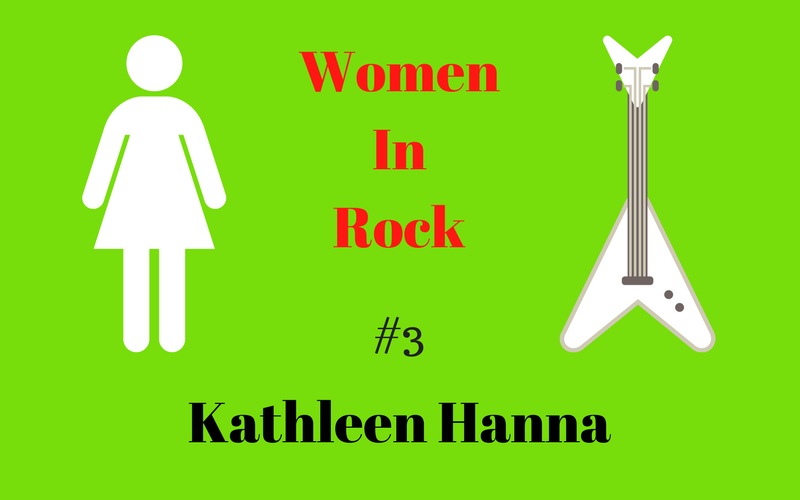 Ironically, given her outspoken nature, Kathleen Hanna is one of the most quietly but profoundly influential artists of the last three decades. She is known for both her solo work, as well as her involvement with bands such as The Julie Ruin and Le Tigre, but is perhaps most famously known as the frontwoman of Bikini Kill who are often considered the founders of the Riot Grrrl movement of the early 1990s. Kathleen Hanna took the punk ethic of the 1970s and brought activism to the forefront of her music, tackling issues of sexism, sexual abuse, and domestic violence. Riot Grrrl was a movement initiated by women for women, and the lasting effects of Hanna’s music and manifesto can still be seen today.

Hanna started out as a spoken word artist. However, it was when fellow spoken word artist Kathy Acker, advised her that no one goes to spoken word shows and that she should start a band instead that Hanna turned to music and joined Bikini Kill. They are perhaps the most highly regarded band of the Riot Grrrl movement, and sought to continue the ethics and motivations behind the movement into their music and physical performances.

Riot Grrrl was an underground movement that emerged from punk scenes in Olympia, Washington, and Washington D.C. in the early ‘90s. As well as Bikini Kill, it is often associated with bands such as Bratmobile, Babes In Toyland, and Sleater-Kinney. As mentioned earlier, these bands followed the same ethics as the punks from the 1970s (Hanna often cites The Slits as one of her biggest influences) and sought to bring political activism back into music, using their platform to highlight issues that they felt were being ignored in the wider music scenes, and indeed wider society.

Through music and fanzines, Riot Grrrl created safe spaces and a sense of inclusion, something that seemed to be lacking in the male-dominated American hardcore scenes that were happening around the same time. Over two full-length albums and a clutch of singles and EPs, Bikini Kill demanded ‘revolution girl style now’, and in an effort to confront the violence between males that often ensued at their shows, Hanna insisted on ‘girls to the front’ in an attempt to ensure the safety of their female audience members. Bikini Kill used scuzzy guitars and Hanna’s inimitable voice to campaign for the rights of women around the world and scream at an ‘elusive, asshole male that was fucking the world over’, “look what you have taught me, your world has taught me nothing”.

Following the break-up of Bikini Kill in 1997, Hanna took a break from music. Eventually, she returned with a lo-fi album that had been entirely self-produced in her bedroom, released under the pseudonym ‘Julie Ruin’. She argues that this album was made as she felt it was time to start singing directly to other women, instead of just letting them watch. Hanna speaks of how the album sounds like bedroom culture. She states that teenage girls’ bedrooms can often be such creative spaces, but the problem is that they are not connected. The idea behind Julie Ruin is to purposefully sound like the record came out of a teenage girl’s bedroom, but was not thrown away or kept private, and to instead push these private moments, thoughts and ideas out into the world to be shared and understood. The same can be said for her career as a whole. Even in her spoken word beginnings and her days in Bikini Kill, Kathleen Hanna has been relentlessly fighting for change, to have ideas heard, to start conversations and to form community.

After her Julie Ruin album, Hanna formed Le Tigre in 1998. Initially she viewed it as an opportunity to perform the songs she had written and produced on her last album live, however it grew into something much more ambitious. Le Tigre took not only the electronics from Julie Ruin but ramped them up and added the attitude of Bikini Kill to create the ‘feminist party band – something that had politically radical content that you could dance to’ – 1999’s immortal track ‘Deceptacon’ is testament to this even now. Le Tigre reformed in 2016 for a one-off single ‘I’m With Her’ in protest against Trump in the most recent presidential election.

During her fight following her diagnosis of Lyme disease, from which she suffered for six years before it was correctly diagnosed and which enforced a lengthy hiatus, Hanna formed a new band called The Julie Ruin, which she considered an ‘outgrowth’ of her 1999 solo album. Hanna is still performing with The Julie Ruin who most recently toured at the end of 2016, promoting their second album Hit Reset. It also saw the return of Bikini Kill’s Kathi Wilcox on bass, providing a thread of continuity to the start of her career, but again they took the attitude of Bikini Kill but transformed it into something completely new. The Julie Ruin continue the electronic elements that Hanna has previously experimented with but combine it with rock’n’roll guitar and continue to produce music that sounds fresh and new, instead of repeating what has been done before.

Aside from her beginnings in Bikini Kill, Hanna’s music may have not always sounded categorically punk, but the ethic and attitude has always been undeniably present in everything that she has produced. Her legacy and manifesto of the Riot Grrrl movement lives on today with bands such as Skating Polly and even Slaves have spoken out against sexual harassment of women at their gigs and have been seen wearing Bikini Kill T-shirts in interviews. Her career was honoured in the 2013 documentary movie The Punk Singer, whose soundtrack provides a handy beginner’s guide to her discography. The Julie Ruin prove that Kathleen Hanna is nowhere near done yet, and continues to produce amazing music and use that to promote the same messages she has since the beginning of her career – because her messages still need to be heard, even 25 years later.

Throughout her career, Kathleen Hanna has brought activism back into punk and provided a voice for women where other movements have sometimes excluded them, and this is why her influence should never go ignored. Any female musician since who has refused to conform to stereotypes of women in rock and subvert expectations owes a debt, from current punk acts like Savages, Ex Hex and Chastity Belt, to performance-art priestesses such as Karen O, Beth Ditto and Florence Welch, and even to folksters like Laura Marling.

Listen to our Introduction to Kathleen Hanna playlist via Spotify here, and tell us what you think below!