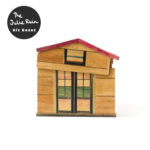 As the prime mover behind riot-grrl poster band Bikini Kill in the ‘90s and then the electro-pop influenced cult heroes Le Tigre, Kathleen Hanna’s status as an alternative music legend has long since been secured. Having spent many years in the late noughties off the grid, recovering gradually from the debilitating condition Lyme disease, Hanna was musically reinvigorated with the release of 2013’s album Run Fast with her new outfit The Julie Ruin – the name of which was taken from a strikingly autobiographical 1998 cassette released on American indie label Kill Rock Stars that presaged the electro-punk of Le Tigre – which saw her reunite with Bikini Kill’s Kathi Wilcox. At the same time, a brilliant documentary movie The Punk Singer was released, investigating her legacy and introducing Hanna to a new generation. With the album and film well-received, a second record has been put together, and Hit Reset is the result, but it’s not simply more of the same.

The keyboard sounds that dominated much of Run Fast have now receded a bit into the background, with lacerating, trebly guitars now a much more prominent part of the mix. Punk rock rhythms now jostle with the slightly more dancefloor-friendly ventures of its predecessor. The practical upshot is that Hit Reset scans like a small potted history of Hanna’s entire discography up to this point, hitting a sweet spot in between the brash punk chops of Bikini Kill and the sophisticated-yet-trashy electro-punk of Le Tigre. Right from the opening title track, a confrontational call-and-response track with the key lyric “I don’t think you’re sorry at all / hit reset!”, The Julie Ruin’s manifesto is political yet fun. The first half of the record is uniformly excellent: the downbeat and melodic ‘I Decide’ contrasts nicely; ‘Rather Not’ deals with unwanted male attention (“if you love me I’d rather not know”); the needling rhythm and spoken-word intro of ‘Mr So And So’ takes a swipe at well-intentioned but clumsy compliments by male ‘pseudo-fans’ (“pretty great… for a girl”) and make it a thoroughly modern update of Hanna’s template. The minimalist ‘Be Nice’, set to squealing electro-punk licks, bubbles up nicely and, although it doesn’t explode, means that The Julie Ruin have more than one musical setting.

The second half of Hit Reset loses momentum slightly, although the results are rarely anything less than interesting. The power chords of ‘Let Me Go’ are slightly blancmange-y and the standard ‘Record Breaker’ are a bit non-descript, and seem to be there for little other reason than ballast. Towards the end of the album, the back-to-back duo of ‘Roses More Than Water’, with a mature ambience skewed by some incomprehensible lyrics, and the complex drumming of ‘Time Is Up’ are slightly too experimental for their own good, causing the record to drift a little bit.

However, in ending with the excellent piano-based ‘Calverton’, which contains longing, yearning lyrics about physical distance from a lover, shows once again that Hanna has a versatility in her songwriting that her detractors have often lazily assumed she doesn’t possess. With a little editing this could have been an all-time Hanna classic, but as it is Hit Reset is an interesting and immensely satisfying listen from an artist whose relevance is entirely undiminished with the passage of more than 25 years. (7/10)

Listen to Hit Reset here via Spotify, and tell us what you think below!