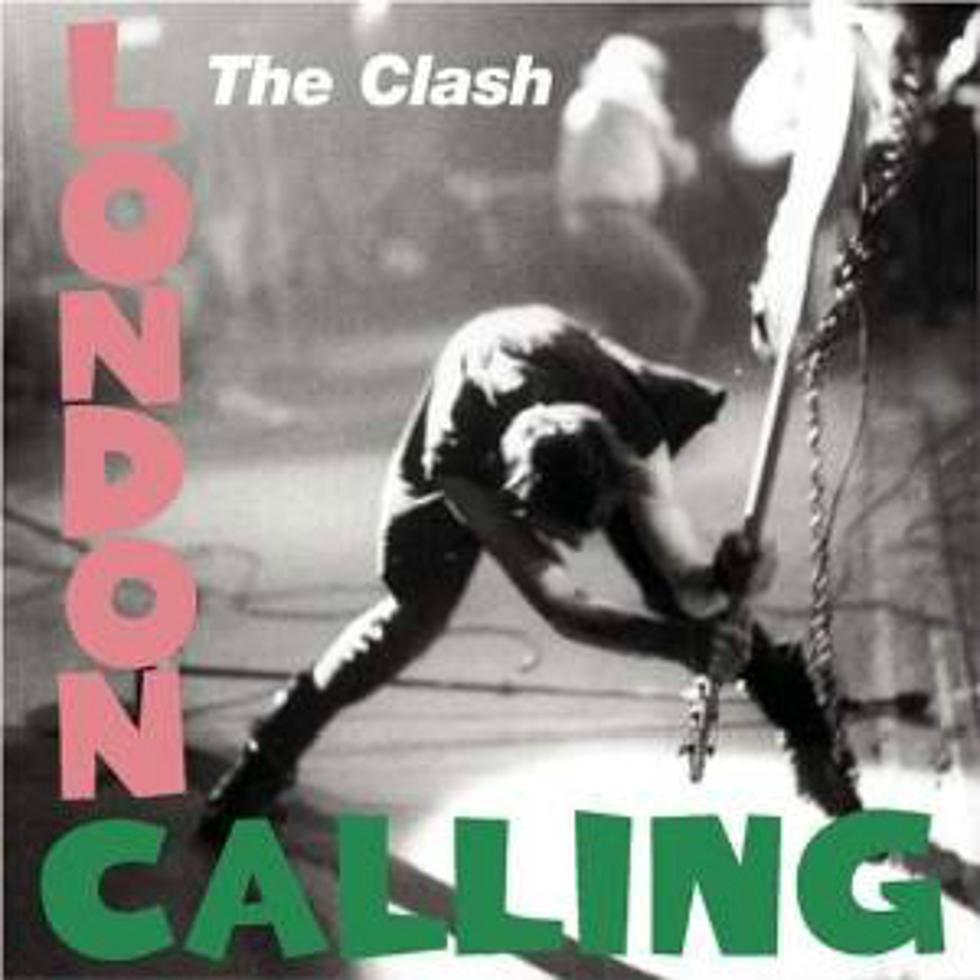 Given their reputation as British punk’s most creative and firebrand outfit, The Clash’s status as one of the canonical all-time great bands seems like it was never in doubt, looking back on their career. But at the start of 1979, a year that eventually culminated with the release of their legendary double album London Calling, that destiny was far from certain. The band weren’t in great shape, either critically or economically. Bernie Rhodes, their firebrand manager who had helped sign The Clash to CBS and had generally acted as a Malcolm McLaren-esque Svengali figure, had been fired after butting heads with the band, which had cost them their Camden rehearsal base. They were financial straits and, furthermore, their second album, 1978’s Give ‘Em Enough Rope, may have housed quality singles, hit no.2 in the UK Albums Chart and given them a foothold in the States, but Sandy Pearlman’s radio-friendly production had smoothed out many of The Clash’s rough edges compared to the righteous, jagged punk of their 1977 debut, and had alienated a substantial portion of their British fanbase.

So when it came to writing and recording their third album, options were tight and the pressure was on. Caroline Coon, the girlfriend of bassist Paul Simonon, acted as their manager and they embarked on an American tour bankrolled by their U.S. label Epic at the start of 1979. Upon returning to London in the spring, they eventually found a new rehearsal space and recording studio in an unassuming but completely inconspicuous plot in Pimlico, and the band spent the best part of five months constructing what would come to be regarded as their finest hour (or so).

READ MORE: “No Elvis, Beatles or the Rolling Stones” – an Introduction to The Clash

Casting an eye over the British punk scene of the previous couple of years, a time that had recently seen the emergence of post-punk, with bands like Wire, Gang Of Four and Public Image Ltd., as well as the collapse of first-wave punk, The Clash decided they would explore as many avenues as possible, inspired by the music that had shaped and influenced them as individuals. Lead singer Joe Strummer delved into the history of rock’n’roll, dating back to the mid-Fifties, Paul Simonon explored reggae rhythms, and drummer Topper Headon experimented with jazz fills and licks, making the most of his natural talents. With the mercurial and unorthodox Guy Stevens behind the production desk – someone who was moved to throw chairs around in the studio in fits of passion and rage – the aim was to capture immediacy, tacking away from the sometimes over-produced nature of Give ‘Em Enough Rope and encouraging more creativity.

When it was released in mid-December – priced as a single LP despite being a double album, such was the band’s insistence that their fans not be ripped off – London Calling took almost everybody by surprise, from those who adored the band to critics who had begun to write them off. A small number hated it, accusing The Clash of diluting the spirit of punk by the songs’ diversions into reggae, dub, R&B and even soft rock, but the more open-minded recognised that it was a tremendous leap forwards. Four decades on, London Calling still stands as the most well-known album that signposted a departure from the restrictions and solipsism of first-wave punk. Even the album’s iconic artwork reflects this. The combination of Pennie Smith’s black-and-white shot of Paul Simonon about to smash his bass guitar on-stage at New York’s Palladium, with the pink and green font directly parodying Elvis Presley’s debut album, is both a salute to the history of rock’n’roll and a sign of its rebirth, of destruction signaling renewal.

Critically, although it pulled on a very much wider spectrum of influences, the 19 songs still carried and communicated the original spirit of punk. The righteousness, rebellion and fury of the three-chord movement was apparent from the first drop of the needle, on the ominously pre-apocalyptic album opener and lead single ‘London Calling’. With its loping bassline and slashed guitar line, with Joe Strummer’s lyrics referencing nuclear paranoia, police brutality and economic meltdown, the song became the biggest hit of their career so far – the Morse Code sounds during the fade-out spelling out ‘SOS’ and created by Mick Jones’s guitar pick-ups a neat flourish. The same anger was there, also expressed in generational terms (“phony Beatlemania has bitten the dust”) but it was now harder, taking the form of cynicism and allied to a greater sense of maturity.

One of the key aspects that holds London Calling together is Guy Stevens’ production. An interesting character, he had been a major player in the industry throughout the Sixties, but by 1979 he had a point to prove, and his ability to downplay The Clash’s intimidating personas and bring out different aspects of their personalities – something you can hear in the softly played pop elements of Mick Jones’s excellent ‘Lost In The Supermarket’, commenting on the corrosive effects of consumerism on identity, or the 2-Tone tribute of ‘Revolution Rock’ – made the album strike on a surprisingly personal level, as the listener discovered something about the band as individuals.

As it progresses, London Calling derives its strength from its refusal to settle in to any one style. On side one, the rockabilly punk cover of Vince Taylor’s ‘Brand New Cadillac’ sits next to the louche ‘Jimmy Jazz’ and the buoyant reggae of ‘Rudie Can’t Fail’. The enervating ‘Spanish Bombs’, Strummer’s homage to the International Brigades of the Spanish Civil War and which also satirises left-wing in-fighting, the righteous, militant ‘Clampdown’ and Paul Simonon’s dazzling ‘The Guns Of Brixton’ all populate a scintillating second side. The last of these tracks, in particular, was a great illustration of the way that London’s youth was soaking up the sounds of the British Empire’s dwindling outer reaches – bored of the restrictions of punk, Simonon and The Clash were infusing their music with the influences of their youth. In the case of ‘The Guns Of Brixton’, this was Jamaican dub reggae and Trojan Records imports from the late Sixties and early Seventies.

London Calling’s second disc is even more varied in its mood and dynamism. Its first side manages to house ‘The Card Cheat’, the band’s attempt at a Phil Spector-style ‘wall of sound’ with every instrument double-tracked, alongside the workplace oppression thumbnail-sketch of ‘Koka Kola’ and a joyous cover of The Rulers’ ‘Wrong ‘Em Boyo’ all in a sequence. The final side, featuring the muscular ‘Four Horsemen’, the galloping charge of ‘I’m Not Down’ and the martial funk and metronomic rhythm of ‘Train In Vain’, shows what a cohesive unit The Clash were at their best, and also highlight the group’s secret weapon in Topper Headon’s drumming. Even the divisive ‘Lover’s Rock’, perhaps the least essential cut on London Calling, at least demonstrates that the band could do ‘mellow’.

Hitting number 9 in the UK charts and performing well Stateside, London Calling was comparatively quickly hailed as one of the greatest albums of all time. For The Clash, though, such artistic heights would elude them from this point on. Having challenged their listeners, they gambled on performing the same feat again as they produced a weighty triple album, Sandinista!, the following year. Sprawling messily over gospel, folk, calypso, disco and even a kids’ choir version of ‘Career Opportunities’, it was a difficult listening experience. 1982’s Combat Rock, returning to a single-album format, was the group’s commercial high water mark, containing several of their best-known tracks like ‘Rock The Casbah’ and ‘Should I Stay Or Should I Go’, but by now the group was starting to disintegrate. Topper Headon’s drug addiction made his position untenable, and Strummer and Jones’s rivalry led to the latter quitting The Clash to form Big Audio Dynamite. Strummer and Simonon ill-advisedly limped on to make 1985’s Cut The Crap, an album so terrible that Strummer quickly disowned it, and it remains persona non grata in the band’s catalogue to this day.

But none of these subsequent mis-fires, inconsistencies and embarrassments can tarnish the legacy of London Calling, a canonical great album in the annals of rock history that really does deserve its reputation. As well as an expanded re-mastered re-issue to mark the 40th anniversary of its release, the Museum of London is hosting a free-to-enter exhibition until the spring of 2020, showcasing personal items from The Clash’s archive.

Listen to London Calling by The Clash here via Spotify, and tell us what you think below!