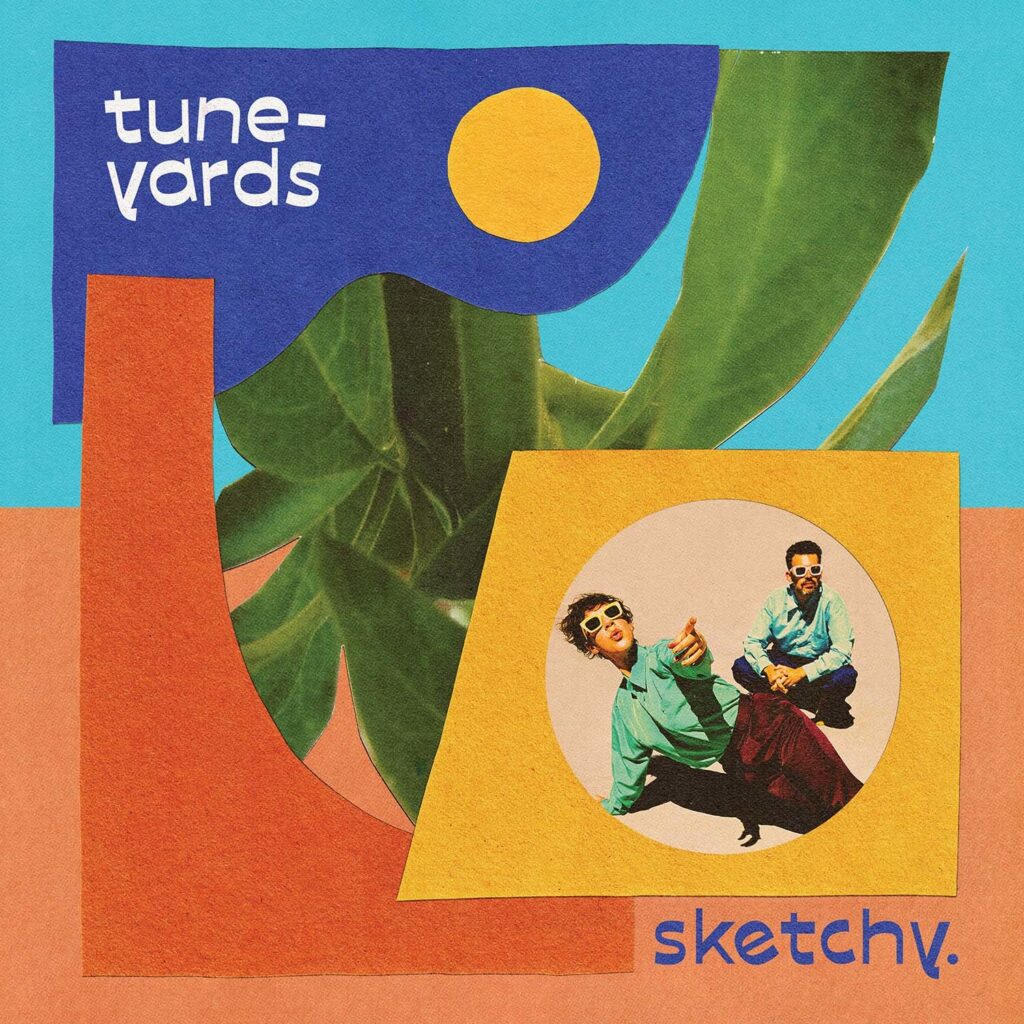 Tune-Yards have quite some musical developments under their belt. Starting out with bare bones lo-fi ukulele, DIY percussion and vocal looping on their debut Bird-Brains, they have grown in sound with each consecutive record, packing more and more melodic and lyrical punch. On sketchy., Tune-Yards sound their fullest, presenting intriguing layers upon layers of vocals with a fuzzy, distorted tech edge, a sample-like sonic landscape and shining rhythm and synth moments. The top three tracks that illustrate these aspects best, funnily enough, are its singles – opener ‘nowhere, man’, ‘hypnotized’ and ‘hold yourself’.

‘nowhere, man’ is Garbus’s reaction to the attack on female body autonomy which happened in the state of Alabama outlawing abortion as a whole in 2019, and is built atop a rolling vocal repetition of lines “People wanna hear you sing” and “Nowhere to run / Nowhere to hide” that adds to its immediacy, with deconstructed jaunts of riffs that act as punctuation. It’s angry and relentless, with a sarcastic twinge in her voice, starting the record off with a confrontation, a hint of what’s to come. ‘homewrecker’ follows a similar political line, Garbus discussing whiteness in the context of American history, racism, capitalism, and culture, a thematic follow up to Tune-Yards’ previous album I Can Feel You Creep Into My Private Life, specifically the track ‘Colonizer’. Garbus’s voice is the focus of the track, a chant underlined by dissonance and goblin-like backing vocals in contrast with a more musical-theatre interlude that soon twists into ‘garblage’ like the rest of the track, something sweet-sounding becoming twisted and corrupted in real time. The politics of the record don’t come off as preachy or self-righteous, the record being too self-aware and sophisticated for that, but rather as an individualistic digestion of many a discussion that has rightly dominated the social sphere over the last couple of years.

‘hypnotized’ and ‘hold yourself’ threaten to become the new crowd singalong favourites out of the Tune-Yards’ discography, blending dynamism with earworm melodies and vulnerable lyrics. Whilst ‘hypnotized’ comes off as a well-crafted love song on a superficial level, as pop often is, it conceals a surrealist environmental undertone that explodes into a chorus that is hard to forget, boasting many a moving harmonic part, all coming together miraculously. It comments on how the fast pace of our lives make us forget about our individual power to change and control our surroundings. ‘hold yourself’ follows after ‘silence pt. 2 (who is “we”?)’, a track that is a literal minute of silence, a moment of calm in an otherwise extremely dense record for reflection, and both serve as ‘rest’, just briefly. ‘hold yourself’ starts off as one of the calmer tracks on the record, quickly rising into an explosive, cathartic power pop chorus, singing about acceptance and forgiveness for the mistakes and trauma our parents inflict upon us, touching and empathetic, utilising both dreamy synths and bold brass accompaniment.

Upon analysis, sketchy. is a highly political record that leaves little space for escapism, but by doing what they do best – present us with inventive, experimentalist, energetic avant-pop – Tune-Yards successfully walk the line between being vocal on topics they care about and being overly preachy to some. It’s the self-conscious, self-aware nature of Merrill Garbus’ songwriting that allows this to be the case, critiquing herself first and foremost, and presenting the heavy material with cathartic, moving music. (8/10) (Aiste Samuchovaite)

Listen to Sketchy by Tune-Yards here via Spotify, and tell us what you think below!