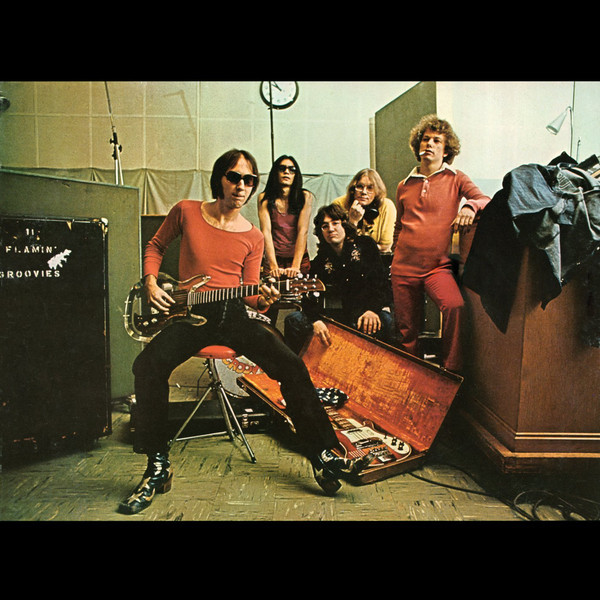 San Francisco at the turn of the Seventies has always been synonymous with psychedelia. The lysergically enhanced rock jams emerging out of the city’s Haight-Ashbury district, the happenings, the kaleidoscopic explosions of colour are all things that leap irresistibly to mind. However, that scene was always way too fertile to be limited simply to hazy cosmic vibes, and the existence of The Flamin’ Groovies are proof of the city’s diversity that often goes unrecognised. Their short-lived first burst of creativity, which peaked in 1971 with their third studio album Teenage Head, remains one of the most criminally underrated bodies of work in the rock canon, welding slick Chuck Berry-style riffs to beat music’s sense of clipped economy.

They were a classic case of a band being in the wrong time and place, dealing in countrified rockabilly and stripped-down bar-room blues at a point in time when rock was becoming more complex, and performed by more technically accomplished players. The band had their roots in the same kind of culture as their psychedelic rock contemporaries, forming at high school and blessed with two songwriting co-vocalists in Cyril Jordan and Roy Loney. Taking inspiration from the original rock’n’roll explosion and Fifties and early Sixties rockabilly, their sensibilities diverged from the outset in comparison to their San Fran contemporaries. Teenage Head’s artwork speaks volumes, in this respect, the band’s greaser, sunglasses-bedecked image on their front cover was a conscious rejection of the hippie aesthetic: amphetamines, not LSD.

Richard Robinson’s production is the key to Teenage Head’s reputation. The clarity he brings to it makes every instrument cleanly defined in the mix, yet it also doesn’t dull the raucous sound of the group’s overall execution. It means that the rip-snorting, good-time rock’n’roll of opening track ‘High Flyin’ Baby’ has the feel of a band plugging in and spontaneously letting fly. The chugging, motoring guitars of the title track ‘Teenage Head’ make it a classic piece of adolescent alienation. The sweaty blues-rock of ‘Yesterday’s Numbers’ and the Southern rock-presaging closer ‘Whiskey Woman’, like an offcut of Dylan’s work with The Band, make up a very strong body of original rockers within Teenage Head. The Cramps-esque vamping of ‘Evil Hearted Ada’, set to theatrical rockabilly, is perhaps more disposable but nonetheless entertaining, essential to the soul of the record.

However, there’s also excellent explorations of the blues within Teenage Head. ‘City Lights’, in particular, captures the mournful soul of the blues as much as of the Stones records of the time – of which, more later. The cover versions are also intelligent and inventive, with Loney’s new set of lyrics to a refreshing take on Robert Johnson’s ’32-20’ the standout. The fun, swinging blues jam of ‘Doctor Boogie’ and the irreverently noisy take on Randy Newman’s ‘Have You Seen My Baby?’ are also riveting displays.

Because of the kind of music they played, in the time and place in which they were doing it, The Flamin’ Groovies never quite got the plaudits they deserved. While the few reviews they did garner were usually very positive, they were out of place in a country obsessed with soloing rock heroes, with the result that almost none of their albums, EPs or singles made any kind of impression in America’s mainstream charts. Only 1976’s Shake Some Action, the album that followed Teenage Head five years later after Loney had quit and been replaced by Chris Wilson, who steered the band in a post-British Invasion direction, charted on the Billboard 200. That’s perhaps the most famous iteration of The Flamin’ Groovies from a UK perspective, as their sharp-suited, Cuban-heeled, modish delivery had an influence on the first wave of punk soon afterwards.

However, the Teenage Head era of The Flamin’ Groovies gradually became popularly rehabilitated in the Nineties, when contemporary rock heroes such as Primal Scream’s Bobby Gillespie began trumpeting them as an influence. Not that it didn’t have its champions at the time – Mick Jagger, whose Rolling Stones released the very similar Sticky Fingers a matter of weeks after the Groovies’ album, felt that Loney and Jordan’s approach to countrified rock was better than their own – but, in a similar manner to Big Star at around the same time, the zeitgeist was simply against them and they slipped under the radar.

Listen to Teenage Head by The Flamin’ Groovies here via Spotify, and tell us what you think below!