REVIEW: The Mountain Goats – ‘In League With Dragons’ (Merge) 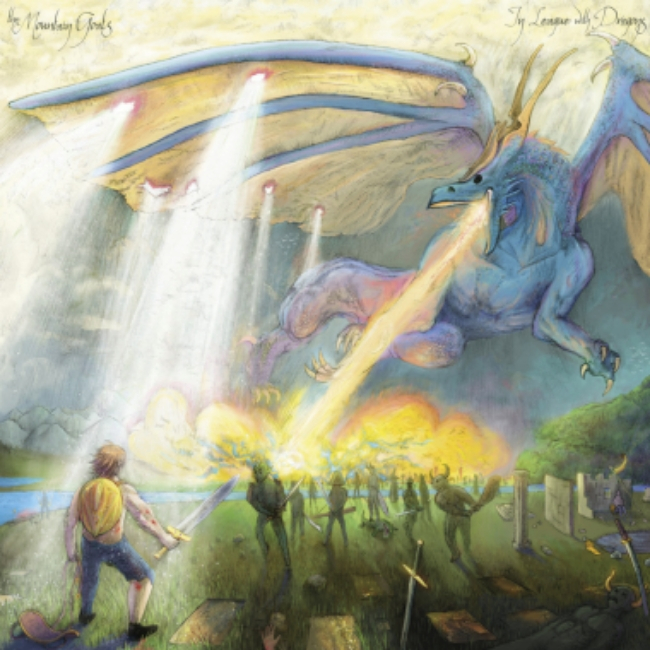 Although their 17th album concerns ageing and decline, John Darnielle and The Mountain Goats show no sign of slowing down on ‘In League With Dragons’.

As a prolific songwriter on top of being a podcaster and, most recently, an acclaimed novelist, The Mountain Goats’ indefatigable leader John Darnielle has long since stopped having had anything to prove to anyone. As a storyteller, there’s very few better than him currently operating in music in 2019, and in recent times he’s decided to challenge himself on that front even further than normal, hurtling himself headlong into detail-rich world-building on the last two Mountain Goats albums, exploring wrestling on 2015’s Beat The Champ and his own indie-music fandom on 2017’s Goths. The project’s 17th album In League With Dragons, inspired by the build-your-own-fantasy narratives of ‘Dungeons & Dragons’, completes a triptych of sorts.

According to Darnielle, the album began life as a short series of imagined tales about “a besieged seaside community called Riversend, ruled by a benevolent wizard”, but which subsequently evolved into a series of meditations and character studies concerning aging masters, both from fantasy and reality. As you might expect given the nature of its origins, In League With Dragons can be uneven at times but is never anything less than interesting and, when it’s good, is among the best material The Mountain Goats have recorded in the last ten years.

Title track ‘In League With Dragons’ a formerly great but soon-to-be-beaten wizard reflecting on his waning power and imminent defeat. A dusty country shindig shot through with exquisite melancholia, Darnielle describes it as “a drawing-together of the themes in play: rebellion against irresistible tides, the lush vistas of decay, necessary alliances”. The gently propulsive acoustics of ‘Younger’ and the beautiful heaves and swells of the delicate opener ‘Done Bleeding’ and ‘Clemency For The Wizard King’ are some of the tender highlights of In League With Dragons, while ‘Cadaver Sniffing Dog’ is a much more rhythmical affair, an upbeat yet muted rocker. All of them are fabulous demonstrations of writing skill that show Darnielle has lost none of his flair over the years.

The songs about fictitious characters based in the real world are no less striking. ‘Doc Gooden’ concerns a once-great baseball player wishing for a tragically unlikely comeback, Darnielle effortlessly displaying his songwriting brilliance with descriptions like “Potholes in the parking lot / You feel the jolts a little harder every year” and “don’t call it a comeback / I’ve been here for years”. The indie-country of ‘Passaic 1975’ is about an ageing rocker, while the thumping rhythm of ‘An Antidote For Strychnine’ seems to be a rumination on survivalists, before the breezy, uplifting closer ‘Sicilian Crest’ ends things on a triumphant note in the context of an album largely about decline.

A word or two also for Darnielle’s backing musicians. The Mountain Goats have always been elastic in number, and the current four-piece line-up has brought a more three-dimensional, fleshed out sound to their recent records, and the same is true on In League With Dragons. Jon Wurster’s drums provide the critical underpinning of everything that goes on, while Arcade Fire member Owen Pallett, behind the desk, gives the record a busy and industrious quality at the right points but scales the productions back at others. However, the baroque flourishes that graced recent Mountain Goats records have gone, in favour of a more traditional, nuts-and-bolts approach, and it feels like a missed trick.

Who knows what’s next for The Mountain Goats, now more than a quarter of a century into its existence, but the only thing that’s certain is that it’ll be as fascinating as everything else in their enormous discography. In League With Dragons could have been forgiven for simply marking out time nearly 30 years into the band’s career, but John Darnielle has never been content with merely phoning it in. The album may be concerned with ageing figures battling against the dying of the light, but Darnielle is an awfully long way from that point himself. (7/10) (Ed Biggs)

Listen to In League With Dragons by The Mountain Goats here via Spotify, and tell us what you think below!