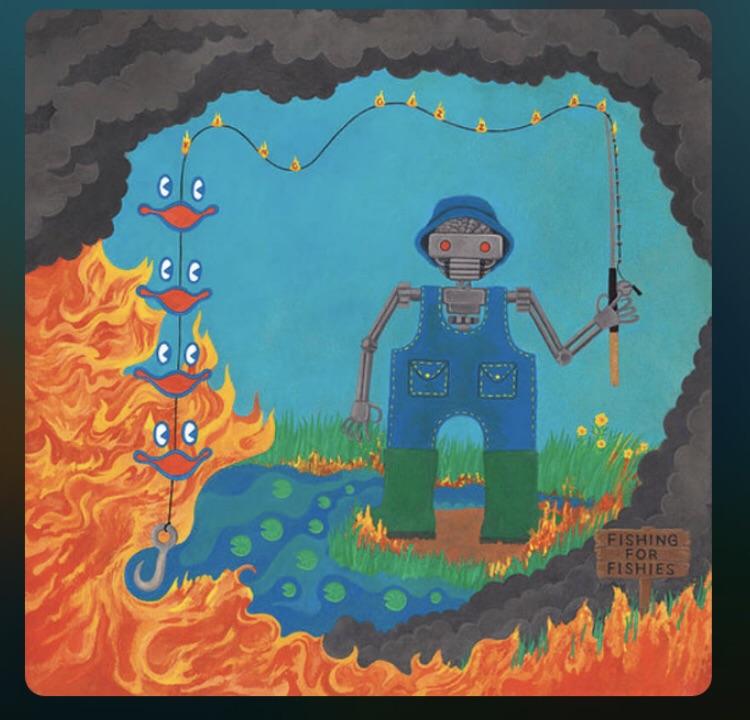 King Gizzard & The Lizard Wizard use psychedelia to regress to innocence and childhood on ‘Fishing For Fishies’.

When applied to creating a piece of music, psychedelia is a concept that can change values almost instantly, from haunting to ecstatic or overwhelming to relaxing. For a band to truly embrace psychedelia, they must show they understand exactly what kind of alternate realities they want to create for their audience. With this in mind, it has to be said that King Gizzard & The Lizard Wizard are among the finest of psychedelic rock musicians of current times, and their latest album release, Fishing For Fishies, also their first since their epic run of five albums in 2017 alone, is a testament to how versatile this group can be in manipulating psychedelia and wringing fresh sounds from it.

Upon first listen it’s immediately apparent that King Gizzard draw a lot of song-writing influence from the pioneers of numerous genres, and take great pleasure in distorting the stereotypes of such genres to create an unusual feel to their music. In particular, a few tracks on Fishing For Fishies have some focus on glam rock, with references to multiple T. Rex hits in the title of the second track, ‘Boogieman Sam’, which could easily be a long-lost Marc Bolan tune. The ‘boogie’ rock style is revisited throughout the album and tracks ‘Plastic Boogie’ and ‘The Cruel Millennial’ feature a similar rhythmic bounce. However, upon each return to the ‘boogie’, King Gizzard adapt and build upon the glam-rock foundation to slowly warp the recognisable traits of the music. Before you know it, the instrumentation has altered and the feel of the music has morphed into the final track ‘Cyboogie’, which sounds like a ghostly Daft Punk track featuring a digital Stevie Wonder on an electric clavinova; a wonderful example of both self-parody and an understanding of the development of musical styles.

A flaw of many bands that categorise their music as ‘psychedelic’ is that they take the concept very seriously, and often don’t explore the lighter side of reality escapism, with many bands attempting to craft vast galaxies and endless shining cosmos with their songwriting and production. It’s a bit much sometimes. King Gizzard are one of the few groups that seem to understand that occasionally, simpler, carefree and HAPPY music can provide just as much, if not more, of an otherworldly experience for the listener. They provide an uncomplex distraction from reality by including aspects of innocence to their music, and the title track, ‘Fishing For Fishies’, is a great example of this. I mean come on, what a silly name. But the track evokes thoughts of summer and times without worry, and this is just as true to the concept of psychedelia as the fast-paced swirling of ‘This Thing’ or the heavy bounce of ‘Plastic Boogie’. The entire album feels as though it’s just looking forward to summer, complete with wistful vocals, and a flurry of harp every so often to whisk the listener off into another dream.

Fishing For Fishies is an album that’s having fun with the music that inspired its creation, and from this record anyone can see that King Gizzard & The Lizard Wizard are clearly a band that enjoy the writing and recording process. It’s exciting to listen to an artist that can modify familiar strains of music in a way that retains their character, but still gives our ears something new to chew on. And as far as psychedelia goes, many aspiring psych musicians could learn from King Gizzard not to take themselves seriously all of the time – if you enjoy music, let your songs show it and don’t get bogged down in depressing topics. A little child-like wonder never hurt anybody. (8/10) (Jacob Kendrew)

Listen to Fishing For Fishies by King Gizzard & The Lizard Wizard here via Spotify, and tell us what you think below!