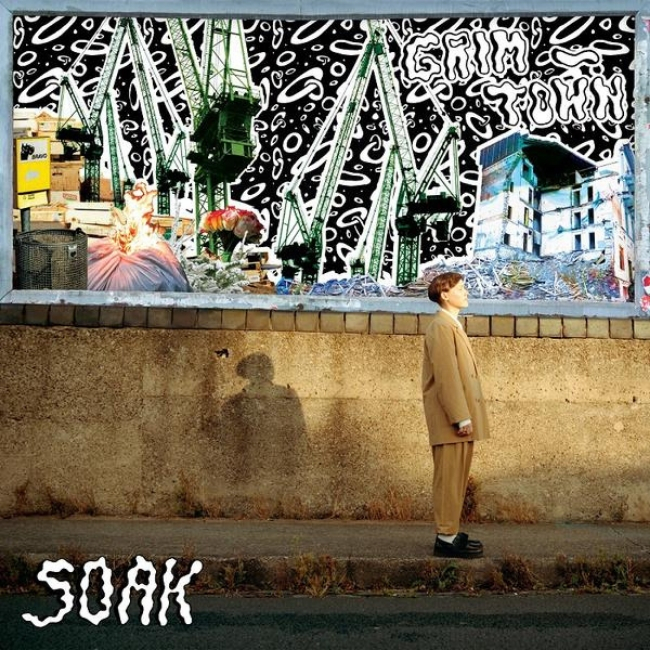 A loose concept album of hope and strength in the face of disillusionment, Bridie Monds-Watson’s second SOAK album ‘Grim Town’ is a leap forwards.

Northern Irish singer-songwriter Bridie Monds-Watson, better known as SOAK, has not only garnered attention from her insightful and emotional debut album Before We Forgot How To Dream, but has also recently been a strong advocate for LGBTQ rights. She was featured in a short Channel 4 interview where she discussed the situation in Northern Ireland and how they are falling behind, despite several polls depicting overwhelming support, in comparison with the rest of the UK. From the age of six, Monds-Watson’s parents took her to multiple anti-war demonstrations, until they separated when she turned 13. Soon after, she came out as gay herself to her parents. She said in an interview with The Independent upon the 2015 release of her debut: “I grew up in this incredibly open environment where my parents were always my friends and I think that has had a massive impact in the way I grew up and what I believe in now is almost a direct reflection of my parents’ opinions”.

Her biggest obstacle as a young child was overcoming her severe dyslexia and was even told that she may never be able to write at all. But at school she was able to progress to the top set in English. From the age of thirteen onwards, her obsession for songwriting became palpable to point where she dropped out of school at the age of 16. Before We Forgot How To Dream, a largely indie-folk affair which won the Irish Choice Music Prize Album of the Year, talked about experiences growing up in her home city of Derry and going to a school attended by both Catholic and Protestant students. For example, the deceptively simplistic track ‘Sea Creatures’, which she wrote when she was fourteen, deals with some people’s intolerance of homosexuality (“Sea creatures / Interfere / I wish they would disappear”), which was inspired by one of her friends being bullied because she was gay.

Now 22 years old, Monds-Watson has further honed her artistry and presents a much bolder and mature approach to her songwriting. The title of her new sophomore album, Grim Town,strikes a despondent tone that’s immediately confirmed by the opening track ‘”all aboard”’. The background, Pink Floyd-esque ringing organ chords effervesce a sense of despair that ties in magnificently with the song’s narrative. A train conductor who makes announcements for a train that is for “for the following categories of passenger only: recipients of universal credit or minimum wage, the lonely, the disenfranchised, the disillusioned, the lost, the grieving”. Passengers are also reminded to “surrender any faith, aspiration or optimism to platform staff if you haven’t already”. In short, SOAK seems to be imagining a cruel world where life-long dreams go to die.

The following track ‘Get Set Go Kid’ personifies the harsh realities that are likely to occur in adulthood with lyrics like “You survived pesticides / Sertraline, nicotine / Such behaviour romanticised / Here comes the danger / This is not the life” emphasises childhood and teenage innocence, but soon the protagonist realises that “There’s an entire world to live / Beyond your middle city apartment”. One cannot help but admire the transition between the Björk-ish third verse and bridge that brightens up the song with SOAK repeating “You did it / You’re alive”.

As a whole, Grim Town could be described as a concept album, because the themes explored throughout the album all stem from the idea of disillusionment. There are several tracks that deal with romance and relationships, like ‘Maybe’, containing pretty guitar melodies and enthralling brass instrumentation, where the protagonist regrets breaking up with someone where the relationship may have actually gone somewhere: “Convinced we were a matter of lust / Too temporary to be serious / What was time but a graveyard of lost chances?”.

‘Crying Your Heart Out’ and ‘Valentine Shmalentine’ are somewhat interlinked as evidenced by the lines “Bought Tesco flowers / With the little I’d made” from the former and “Purchasing flowers outside of the local bar / Such a romantic, a pound for moulded plastic” from the latter. But ‘Valentine Shmalentine’ delves deeper into what the protagonist’s desires are. “What purpose was I / If not the apple of your eye? / In an endless scroll, red heart shapes speed by / If a good deed doesn’t earn a post on the internet / Is it selflessly meant?” poses the question of the whether Valentine’s Day has become so commercialised to the point where couples buy things for each other just to make themselves feel good and, seeking validation from the multiple likes that they could potentially receive on their social media posts.

SOAK’s eclectic sonic palette also impresses on Grim Town, from the New Wave sensibilities on ‘Knock Me Off My Feet’ to the catchy pop chord progressions and chorus on ‘Déjà vu’. Moreover, the harmonies presented on ‘YBFTBYT’ are gorgeous and uplifting. The finale ‘Nothing Looks The Same’ airs a sense of relief for the passengers on the train we heard about at the beginning as a conductor announces the following: “Dear passengers, this northbound 433 train is now departing Grim Town. Atmospheric pressure and air quality will improve rapidly. Breathe deeply, feel your heart fill with joy. A sense of dizziness and mild euphoria. Don’t panic. Gather your optimism, energy and smile as you travel onwards. Everything will be alright in the end”. An optimistic end to what was a narrative of hopelessness.

Thanks to SOAK’s innovative storytelling and the accompanying music is just as thought-provoking, Grim Town has a great chance at connecting with an even wider audience than her debut. A creative and triumphant second outing. (8/10) (Harry Beynon)

Listen to Grim Town by SOAK here via Spotify, and tell us what you think below!