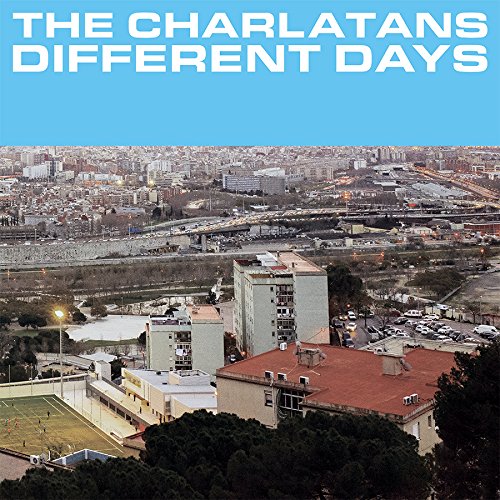 For their 13th album ‘Different Days’, The Charlatans raid their contacts list to help them produce their best album in two decades.

There’s something so incredibly heartening about The Charlatans’ continued, defiant presence in the music scene that it almost brings a tear to the eye. Enduring the deaths of keyboardist Rob Collins in 1996, and then drummer Jon Brookes in 2013, plus the nervous breakdown and eventual recovery of bassist Martin Blunt in 2001, there can be few other bands who have shown such remarkable fortitude in the face of adversity. But The Charlatans are survivors in more ways than one, weathering and adapting to all the various changes of musical fashion since they came to prominence at the height of ‘Madchester’ in 1990 that have scuppered the careers of so many of those that have come since, to the extent that they’re now a British indie institution. Never particularly vogueish but never out of demand either, their brand of soulful, folk-inflected indie has proven to be evergreen over nearly three decades of their existence.

For their 13th studio album Different Days, The Charlatans demonstrate how universally beloved they are by being able to call on a stellar cast of fellow musicians in order to bring their newest music to life. As on 2015’s Modern Nature, Brookes’ place is filled by a revolving cast of guest drummers, including former Verve member Pete Salisbury, New Order’s Stephen Morris (who also provides programming) and A Certain Ratio’s Donald Johnson. Johnny Marr provides additional guitar work on three tracks, and even Paul bloody Weller provides piano and backing vocals for soulful closer ‘Spinning Out’. But, far from disguising a lack of ideas by throwing in collaborators, Different Days is arguably the most consistently enjoyable and energetic Charlatans albums in 20 years.

As with so much of The Charlatans’ output, the themes of the album are of reflection, personal growth and of putting the past behind you. Opener ‘Hey Sunrise’ finds the band in very familiar territory, a lilting piece of folkish indie tinged with melancholia and with synths percolating through it as it climaxes, but it’s no less pleasant. When you’re great at doing something, keep doing it. Slight elements of funk colour the rhythms of the optimistic ‘There Will Be Chances’ and ‘Over Again’, and the rambling ‘Solutions’ is a throwback to Collins’ trademark organ sounds of the ‘90s. The twinkling synth programming makes the title track an absolute delight.

However, the heart-swallowing urgency of lead single ‘Plastic Machinery’ is one of the greatest Charlatans songs in recent memory, a track that wouldn’t even be out of place on their 1996 career highlight Tellin’ Stories. A stand for individuality in an increasingly bland, conformist society (“at times it’s good to feel rejected”), it’s enjoyably noisy as Tim Burgess pushes his voice to the limit to make himself heard, as if both band and frontman are pushing each other on.

The only slightly negative points come with the rather dull and repetitive ‘The Same House’, and ‘Let’s Go Together’, which is perfectly fine but scans as ballast in the context of what is an otherwise extremely fine album. However, The Charlatans execute everything with such assured panache and character that you can forgive them when they stray out of character in the name of experimenting with their established formula. Not only are they carrying on in spite of it all, they’re refusing to sit on their laurels or court the sympathy vote by simply turning out the same music over and over again. Rather, they’re admirably continuing to push back the boundaries for themselves. (8/10) (Ed Biggs)

Listen to Different Days here via Spotify, and tell us what you think below!