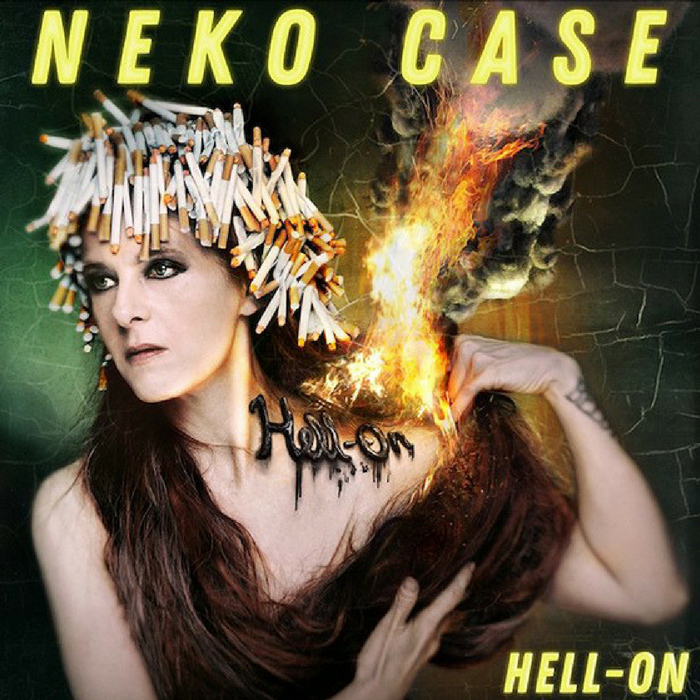 “God is not a contract or a guy” – Neko Case belts out in her signature alto, setting off her deceptively simplistic yet consistently evocative eighth solo LP Hell-On. Being known for her lyrical masterfulness in tying together peculiar imagery of nature and personal experiences and her unorthodox song structures, the American singer-songwriter and producer has strung together a record full of passion, compassion and embracing the unknown.

The period between releasing her most personal album The Worse Things Get, The Harder I Fight, The Harder I Fight, The More I Love You in 2013 and the newest Hell-On has been a tough one for Neko Case. Having lost her grandmother, with whom she was very close, both of her parents, battling with depression and having her house burnt down, you’d expect Hell-On to have lots of gloom alongside violent, punchy, yet poetic lyrics. There are plenty of the latter, but the overall sound and production on Hell-On is bright. Maybe not bubblegum pink bright, but a lighter, warmer shade of green that goes hand in hand with the strong sense of defiance that is felt in the way the lyrical subject of her songs, which is usually Neko Case herself, as she has stated in previous interviews.

Here, she accepts and confronts all the dirt and perversions of the world head on. The cover art is the most literal demonstration of that – the fire burning on Case’s shoulder is a very direct acceptance of all the hardships she’s had to deal with in the past years. The stylistic cocktail of Neko’s country roots and the kind of Fiona Apple/Tori Amos-esque ‘90s pop/rock suits and enhances the storytelling style that pertains throughout most of Hell-On, while having a tasteful tinge of self-mockery.

Starter ‘Hell-On’ is a sly rumination on the unpredictable nature of the world as well as a statement of control over oneself as an inherent part of the animal world. The unexpected metre change before the lines “Don’t you tell me I didn’t warn you/ That that’s some gravity you ought not to play with” and inclusion of the kalimba at the start of the song both ties in with Case’s previous work and informs a newcomer to Neko Case’s music that this woman loves to play with expectations. The hidden, banshee-esque scream adds eeriness and lingers, which clashes with the sunniness of the second track ‘Last Lion Of Albion’ that hits closest to the country music Neko Case used to play at the start of her career.

‘Halls Of Sarah’ is a dignified lament about a womanly entity likened to a silent movie. “You cry like guns across the water / Yet we expect you to bring springtime, it isn’t fair” suggests that the subject matter has to do with Mother Nature and the mistreatment it receives from humanity, which is a common topic in Case’s music. ‘Gumball Blue’ celebrates the family-like relationship musicians have with each other while working together, fittingly featuring The New Pornographers’ John Collins on ‘80s synths (Neko Case also sings for the Canadian indie rock outfit). ‘Oracle Of The Maritimes’ is an apocalyptic sounding love song, full of almost myth-like imagery, housing a lush mesh of strings, guitar and keys, giving it a specific, almost timeless grandeur. ‘Winnie’ is playful and illustrative of both Case’s recent fascination with choruses and feverous research on how women visionaries were excluded from the canon historic narrative, as Neko and Beth Ditto join together in singing “We were warriors! / We clothed ourselves in the guts of our enemies / Who’d no respect for the wild / Warriors! / Long before hotwire safari park husbandry”, informed by Neko Case reading ‘The Amazons’ by Adrienne Mayor – a book by a Stanford University scholar on how new archaeological discoveries proved the existence and spread of female warriors.

Hell-On is both eclectic and completely coherent, as unexpectedness of stylistic variations is part of Case‘s musical identity as a solo artist, used to communicate the same truths that this songwriting giant conjures with her razor-sharp lyrics. Neko Case is a master at making the highly specific and peculiar details of her stories feel relatable, all the while delivering a smooth yet intriguing listening experience by making even the most gruesome concepts irresistible to sing along to. (8/10) (Aiste Samuchovaite)

Listen to Hell-On by Neko Case here via Spotify, and tell us what you think below!