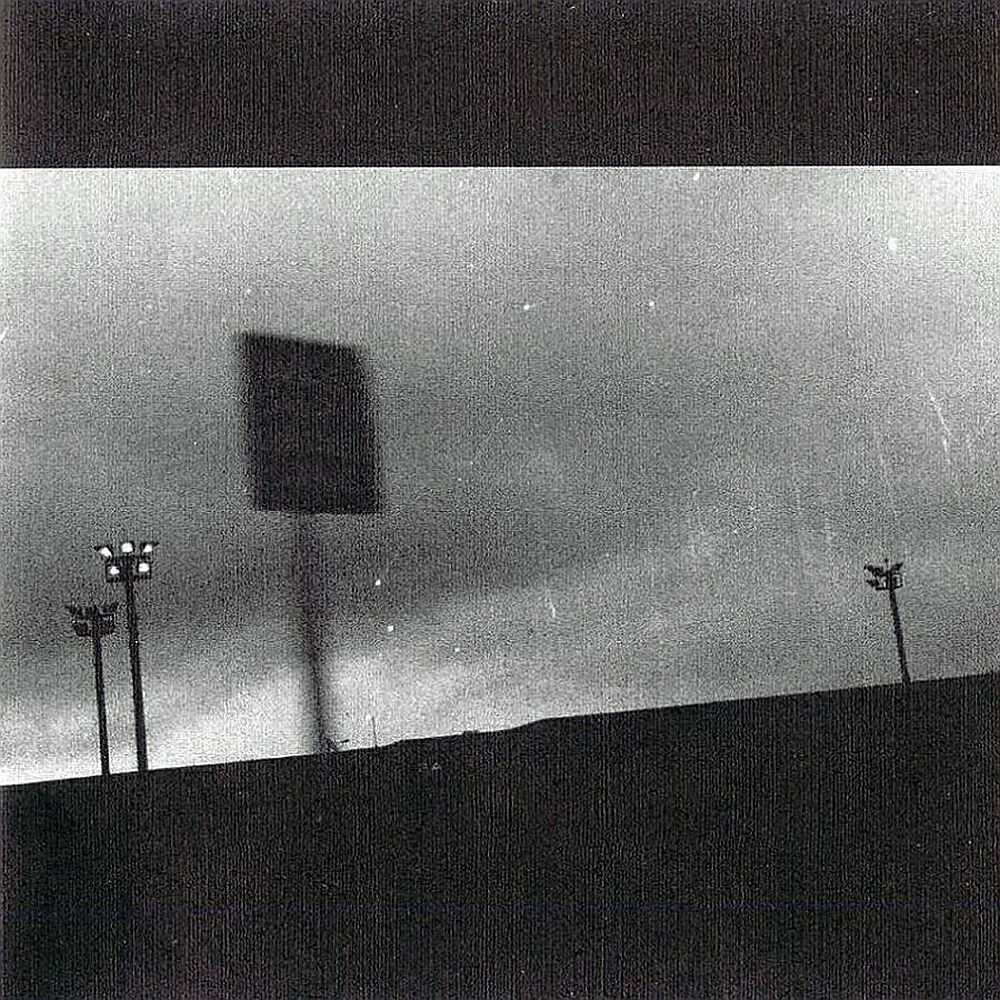 The genre we know as post-rock – long, brooding and often intensely atmospheric rock, characterised by sparse arrangements and weighty rhythms matched by similarly weighty subject matter – was borne from existing styles. The avant-garde New York scene of The Velvet Underground, Glenn Branca and early Sonic Youth and Swans; the magisterial slowcore of Low; the shoegaze of My Bloody Valentine; even the anthemic arena-rock of U2; all of these sonic influences went into its forging. Yet, for all that, it seems to have had a very definite starting point, one from which post-rock actually started to be ‘a thing’ in the music press. That big-bang moment was F# A# Infinity, the first album proper from Canadian collective Godspeed You! Black Emperor.

Before we start, ask yourself: how is it that a band that performs epic instrumentals and almost never uses lyrics could once have been arrested on suspicion of being terrorists by police and almost faced an FBI investigation? This was a true story, by the way, following an episode that occurred on their 2003 American tour in Oklahoma and which was outlined by political commentator Michael Moore. The answer to that question is evident in the extraordinary power of their 1997 debut, which received a limited vinyl-only release and was more widely re-issued in expanded form on CD in June 1998.

While they have always loosely defined themselves as anarchists (yet virtually never speaking out on the subject) Godspeed You! Black Emperor’s genius has always been their ability to conflate the personal with the political, and then to successfully project that onto the most widescreen of canvases, all without the need for lyrics. It gave F# A# Infinity an instantly timeless feel – as Pitchfork succinctly put it, ranking the album in its Top 50 list of the Nineties, the record “sounded ancient, like a thought that had existed for centuries but was just now being articulated”. It’s the sound of the individual human being dwarfed by an inhuman system; the soundtrack for when the oil runs out, and the fall-out from when the economy dies. But it’s much more than some impassive movie-soundtrack experience: F# A# Infinity channels inarticulate despair into a coherent, definitive rage, one that goes beyond anything that mere words can do justice. Once you’ve heard it, it stays with you.

Taking their name from a 1978 black-and-white television documentary about a Japanese biker gang, Godspeed You! Black Emperor was formed in 1994 in Montreal, Quebec by guitarists Efrim Menuck and Mike Moya and bassist Mauro Pezzente. Performing live as a trio for a few months around the local scene, they quickly produced a highly limited and much sought-after cassette, All Lights Fucked On The Hairy Amp Drooling, of which just 33 copies were made. Then adopting a revolving-door policy for local musicians, the group quickly expanded around the core trio to a line-up of nine (on average) members before recording began on a full-length album proper.

Released initially in August 1997 on a limited run of vinyl only by tiny Canadian indie label Constellation, with just one track on each side for a 38-minute release, F# A# Infinity was given a much wider expanded release on CD via Kranky in June the following year, with a third, half-hour track added. While that initial release was largely powered by word-of-mouth and distributed at Godspeed’s live shows, Kranky was able to give it a much bigger profile in 1998, whereupon F# A# Infinity began to take on its now-legendary cult status.

F# A# Infinity is inherently political, despite its total absence of lyrics, constructed from just three songs each spanning at least 16 minutes in length. Each composition breathes slowly, often brooding in awestruck silence and then building up to cathartic peaks of savage noise, with those quieter passages containing just as much majesty and goosebump-inducing power as those crescendos and peaks. Its sonics are rooted as much in the realm of avant-classical music as they are in the rock/blues tradition, and Godspeed You! Black Emperor found a way to resolve these seemingly irreconcilable sounds in a perfect musical union.

If you didn’t get the feeling of apocalyptic destruction from the curiously affecting artwork, a context-less snapshot of some burned-out, post-industrial landscape with that lonely billboard sign and the darkening skies overhead, that sensation is driven home right from the beginning of the album, with the spoken-word sample that heralds opening sequence ‘The Dead Flag Blues’ which goes:

“The car is on fire, and there’s no driver at the wheel / And the sewers are all muddied with a thousand lonely suicides / A dark wind blows / The government is corrupt / And we’re on so many drugs / With the radio on and the curtains drawn / We’re trapped in the belly of this horrible machine / And the machine is bleeding to death / The sun has fallen down / And the billboards are all leering / And the flags are all dead at the top of their poles”

It paints a picture of broken society, just about clinging on to dignity in the aftermath of some catastrophic natural (or perhaps economic) extinction event, with an unaccountable government unresponsive to the people’s needs. Of course, its resonance has only grown stronger in the aftermath of the 2008 recession, one that has trapped ever more people in poverty, of rising rents and insecure jobs that don’t pay enough. After its four-note guitar figure gradually opens up and then recedes, a lonely locomotive honks in the distance before its incredible second half commences. A ponderous, dramatic guitar riff that sounds like it’s come straight from the bleakest Western movie ever made strikes up, before bass, drums and mournful strings are added to create a beautiful sonic vista.

The original LP’s second half, ‘East Hastings’, starts with the sound a crazed street preacher and a riff played on what sounds either like a violin or a bagpipe – it’s genuinely hard to say – before guitars ring out its two-note riff. Gradually, the piece builds up speed, like some massive old machine slowly roaring to life. On both sides, Godspeed follow the same basic template of field recordings, spoken-word clips, hushed beginnings and thunderous climaxes spread over multiple segments. The lack of lyrics means that the listener can project their own feelings onto it – despondency, anger, heartbreak, or even love and beauty.

Final sequence ‘Providence’, a massive half-hour piece added for the CD re-issue in 1998, is even more ambitious, if a little less coherent in its overall structure than the two previous tracks. Its first half gradually builds up a head of steam with pummelling drums before suddenly burning itself out. In its second movement, a militaristic marching beat reminiscent of bagpipe music strikes up, matched by a vertiginous guitar figure.

F# A# Infinity has a good shout at being the best record of the Nineties you’ve never heard of. While the CD re-issue brought it to some kind of prominence within North American indie circles, many more subsequently discovered it with the advent of widespread internet at the turn of the millennium, via message boards and P2P file-sharing. Just like Slint’s Spiderland, which became a cult classic in their absence, many fans of F# A# Infinity were drawn to its sense of mystery – Godspeed You! Black Emperor rarely did interviews, and not much existed in the public domain about them.

Much more than some cerebral but impenetrable experience, crucially, F# A# Infinity was absolutely alive with heart and soul beneath its imposing exterior, something that many experimental bands neglect in their head-long charge to innovate. This meant you could love it, as well as merely admiring its technical brilliance.

Director Danny Boyle was just one such admirer, using sections of the track ‘East Hastings’ in his 2002 movie 28 Days Later and saying that he edited and cut the film with the sound of Godspeed You! Black Emperor in his head. Its groundbreaking dynamics have informed many subsequent bands, including other post-rock figureheads like Mogwai and Explosions In The Sky, right the way through to massive commercial concerns like Arcade Fire. Listen to ‘Rebellion (Lies)’ or ‘Neighbourhood #1’ and tell us those huge cathartic breakdowns aren’t indebted to those of their fellow Canadians on F# A# Infinity.

Of all of Godspeed’s fine works over the subsequent two decades, none of them has quite matched F# A# Infinity in terms of its dynamics, a virtuosic masterclass in the build-up and release of tension – although 2000’s vast Lift Your Skinny Fists Like Antennas To Heaven runs it a very close second, and 1999’s incredible EP Slow Riot For New Zero Kanada makes a terrific companion piece to their debut. After 2002’s indifferently received Yanqui U.X.O., Godspeed You! Black Emperor went into hibernation, with the band’s various members concentrating their energy on off-shoot groups Thee Silver Mt. Zion Memorial Orchestra and Set Fire To Flames. However, they reunited in 2010 and have since produced three well-received sequel works to their original trilogy – the most recent of which was 2017’s Luciferian Towers.

Listen to F# A# Infinity by Godspeed You! Black Emperor here via Spotify, and tell us what you think below!