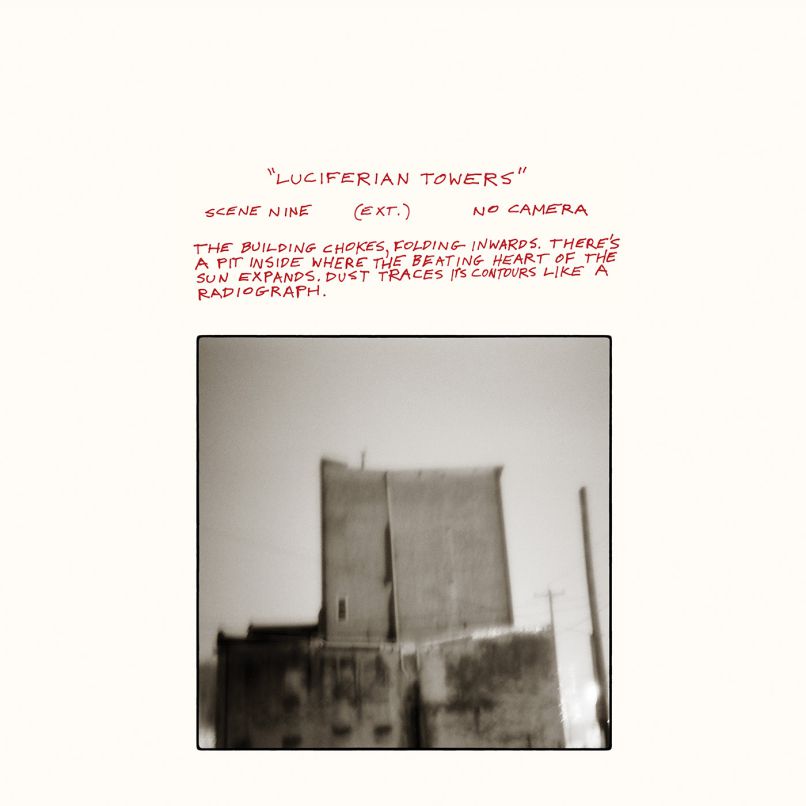 Given the injustices of the state of the world in 2017 that it rages against, Godspeed You! Black Emperor’s sixth album ‘Luciferian Towers’ is oddly flat.

Standing high amongst winding streets of affluence and prosperity, the charred walls of Grenfell Tower still look out across the London skyline. “How they kill us = absentee landlord, burning high-rise” dictates the press release of Godspeed You! Black Emperor’s sixth studio album, and with a title as symbolic as Luciferian Towers, it’s difficult not to assume the explicit implication.

Whether or not Godspeed are pointing to the fiery consequences of London’s recent social housing tragedy is open to interpretation, but for a band forever rooted in the political apocalypse, it sure wouldn’t be a bad place to start. “Labour, alienated from the wealth it creates, so that holy cow, most of us live precariously!” sneers the press release as if sarcastically highlighting those ignorant to class inequality. It’s as if Godspeed are willing its listeners to wake up to such a divide’s seismic proportions.

Where the music is concerned, Luciferian Towers is a complete drawn-out soundscape of cinematic magnitude. Perhaps not quite as devilish as the name suggests, its sound sits upon sparse drones of ascending instrumentation, never once pausing to catch its breath. The four featured songs see Godspeed steer slightly wayward of their usual 20-minute long epics. Instead, discounting ‘Undoing A Luciferian Towers’ and ‘Fam / Famine’, they break the remaining tracks into three more bite sizable chunks, yet each still holding ground as one entity.

Where Godspeed have previously triumphed, the answer has often been buried amongst the meat of their arsenal. Albums preceding their ten-year hiatus such as 2000’s classic Lift Your Skinny Fists Like Antennas To Heaven drew power from irresistible force and intensity and by making complete use of the resources surrounding it. Luciferian Towers continues to harvest these assets but settle only on deflated results.

Ambience is one thing, but too many precariously balanced drones ultimate make up a fairly monotonous experience. It can’t be the best of starts when ‘Undoing A Luciferian Towers’ serves as an ultimately pointless introduction to what should be the benchmarking stab at social and political injustice. As profound and poignant as they insist on trying to be, the three instalments of ‘Bosses Hang’ are lifting but seem like they flatly resemble one another. It’s like Godspeed have taken an idea and rehashed it so blatantly that each section ends up as just a slight variation of the next.

Finally something to applaud, the powerfully titled ‘Anthem For No State’ gives us a fleeting glimpse at Godspeed’s potential. Albeit a little too late to the party, it’s the first time Luciferian Towers provides some commendable progression. From the stripped, isolated beginnings of ‘Pt. I’ to the clattering fanfare finale of ‘Pt. III’, Godspeed place their feet back firmly on the ground. But even so, its arrival falls more than just behind schedule.

Being such a distance from Godspeed’s best, it’s hard to feel optimistic about Luciferian Towers. Given the current cultural calamities Brexit and Trump, it’s hard to accept that a band so adept in delivering cultural commentary was unable to rise to the ideal conditions for the occasion. As strange as it is referring to the world’s current state as ‘ideal’, Godspeed You! Black Emperor should be having a field day, but instead fall well short of the mark. (6/10) (Ollie Rankine)

Listen to Luciferian Towers by Godspeed You! Black Emperor here via Spotify, and tell us what you think below!