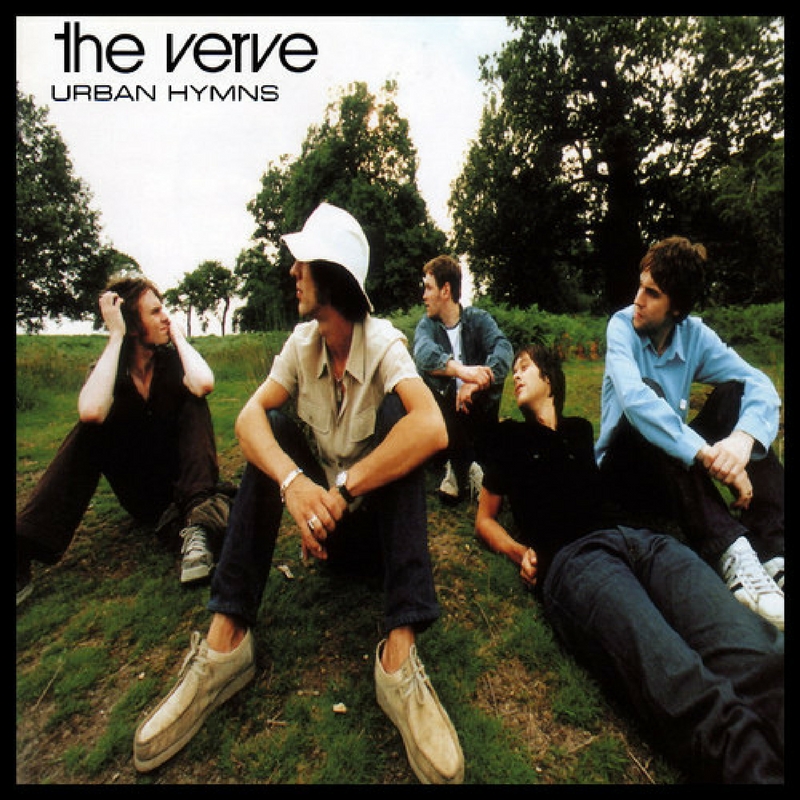 The dazzling sales statistics surrounding Urban Hymns, the triumphant third studio album by The Verve and one of the most fondly-remembered albums of the 1990s in Britain, speak an awful lot about the healthy state of British guitar music at the time, but they also tell an awful lot about the sheer cultural clout of the wider Britpop scene. Urban Hymns has sat inside the top 20 best-selling records in British history ever since its release at the onset of autumn in 1997.

Think about that for a minute – that’s more than The Joshua Tree, or Adele’s 25, or Dido’s No Angel… all phenomenal sellers at different points in history and all with huge international reputations, yet less popular with the British public in raw commercial terms than a group of perennial misfits playing a heady, psychedelic cosmic jams communicating the angst of youth and young manhood. But while these figures are incredible to consider, they don’t tell the whole story by themselves.

However, in the two decades since its release, Urban Hymns has come to be seen as the final chapter of Britpop’s cultural hegemony in the mid-nineties – that period of celebratory, bombastic maximalism surrounding the ascendancy of Oasis, the feel-good summer of England’s Euro ’96 campaign, and New Labour’s general election victory, when British cultural exports seemed to rule the world for a brief time. In more purely musical terms, it represented arguably the last times that the sky truly was the limit for British guitar bands – since then, such ambition has become unfashionable, with new bands getting caught up in ever-decreasing circles of revivalism and dreariness.

In 1995, as Britpop was approaching its commercial zenith, The Verve had split up, having failed to significantly penetrate the charts despite much critical acclaim and two excellent studio albums – 1993’s laconic, hazy A Storm In Heaven and 1995’s wild, ravaged existential masterpiece A Northern Soul. Their final single, the aching string-swept ‘History’, had doubled up as a kind of career epitaph for the band and for Richard Ashcroft’s tempestuous creative relationship with guitarist Nick McCabe, whose talent with the effects pedals has always been the crux of The Verve’s signature sound.

But, crucially, their absence had brought about one critical development. Noel Gallagher, at the very apex of Oasis’ fame and influence, had paid tribute to The Verve as “one of the most important bands in history”, also dedicating ‘Cast No Shadow’ from (What’s The Story) Morning Glory? to Richard Ashcroft in the album’s liner notes. Considering the British music industry was essentially marching in lock-step to Noel’s beat in 1996, this must not be discounted as a factor in the increased interest in The Verve when they did re-emerge.

Shortly after Ashcroft had suddenly announced their split, he reformed The Verve without Nick McCabe, recruiting Simon Tong, an old friend of the band, on guitar instead. However, Ashcroft then realised that McCabe’s unique style was such a crucial element of the band’s sound that he bit the bullet and asked him to return. They had already laid down most of the tracks that became Urban Hymns with producer Youth, but McCabe insisted on going over some of them again with a new producer, Chris Potter, behind the desk instead. In McCabe’s words, “the key tracks were recorded from scratch, but some of them were already there.”

The resulting mix, fortunately, was a beautifully structured and unspoken compromise between the psychedelic, stargazing production favoured by McCabe and Ashcroft’s increasingly philosophical and grounded songwriting. Consequently, they had the transportive, redemptive power to lift a listener’s soul from mundane surroundings, to make you feel invincible for the song’s duration. ‘Urban Hymns’ these truly were, and that concept tied in neatly with the iconic video to the album’s first single, ‘Bitter Sweet Symphony’, which featured Ashcroft bullishly walking down a London street – the Northerner symbolically invading the South – and literally not allowing anything to get in his way.

‘Bitter Sweet Symphony’ itself must surely rank as one of the greatest comeback singles of all time, and instantly made The Verve into megastars. So recently written off as has-beens, for The Verve to rise from the ashes and make something as poetic and graceful and yet with unstoppable commercial appeal is unbelievably rare – only Manic Street Preachers’ defiant and dignified ‘A Design For Life’ is comparable. Anthemic but not bombastic, its sense of grounded optimism, of one-ness with life, the universe and the hands it deals a person, was a reflection of the nation’s self-confidence so soon after New Labour’s general election victory. Its immediately recognisable opening bars were from Andrew Loog Oldham’s orchestral version of The Rolling Stones’ ‘The Last Time’, an unauthorised lift that landed The Verve in some controversy as Mick Jagger and Keith Richards were eventually added to the song’s credits.

But Urban Hymns is not one of those increasingly common types of blockbuster album that’s defined merely by its biggest single: all of the dozen subsequent tracks in the running order have something to contribute to the larger whole, and showcase different sides of The Verve’s capabilities.

We have exploratory, cosmic wig-outs in ‘The Rolling People’, a rambling and noisy jam that harked back to the best moments on A Northern Soul, and the incendiary mojo of closer ‘Come On’. The much gentler and hazier ‘Catching The Butterfly’ is like a waking dream, and its following track ‘Neon Wilderness’ seems to double down on that sense of somnambulant disorientation. These tracks are the most suggestive of The Verve’s heavily drug-influenced past, whereas most of the rest of Urban Hymns is rather straighter in its delivery and poise. No less beautiful, though.

The laconic pace of mid-album ballad ‘Space And Time’ makes it a show-stopper in a more conventional vein, as does the bleary-eyed ‘Velvet Morning’ near the end. The spine-tingling sadness of second single ‘The Drugs Don’t Work’, an object lesson in ‘90s indie dynamics, made the runaway success of Urban Hymns a dead cert as it hit the top of the UK charts just a few weeks before the album itself came out. A genuinely soulful and heart-wrenching all-time classic, it’s a deeply personal track for Ashcroft – he wrote it about the death of his father from cancer, which happened when Ashcroft was just 11.

The third single, ‘Lucky Man’, is another exceptional moment that was a bit overshadowed in the wake of its two stunning predecessors, and which also seemed to embody the ethos and outlook of Urban Hymns in five succinct minutes – life lived, but lessons hard-learned. ‘Sonnet’, the album’s honorary fourth single that The Verve insisted was made chart-ineligible, definitely deserved better. It is a striking moment of introspection, with Ashcroft’s couplet “eyes open wide / looking at the heavens with a tear in my eye” an almost perfect encapsulation of The Verve’s brilliance at communicating young adult angst. It was music writer Paul Morley, as a talking head on one of those occasional ‘greatest albums ever’ shows many years ago, who said Ashcroft became “a kind of Celine Dion figure for teenage boys”, an avatar for all the roiling male hormones of formative years.

After The Verve split and Ashcroft pursued a rather iffy solo career in the 2000s, this type of songwriting could often come across as earnest or sixth-form – but on Urban Hymns, there’s an alchemy at work and his lyrics somehow seem to fit perfectly with the scope of the production. He’s able to somehow strike with raw, unguarded emotion right to the centre of a listener’s soul. But, in fairness, that’s not all down to him. Where Ashcroft occasionally under-wrote his lyrics, McCabe would be there to provide a suitable backdrop, the two working in sync despite their differences. It was this reciprocity and rivalry that made The Verve such a compelling spectacle in their short lifetime.

With two absolutely enormous platinum hits trailing the release of the record itself, Urban Hymns was a long-lasting commercial success, remaining in the British charts for well over a year. In February 1998, The Verve scooped two BRIT Awards for Best Group and Best Album, and it eventually sold more than 10 million albums worldwide (more than a third of which were in Britain) and, perhaps most remarkably, it went platinum in the United States, a place where you perhaps wouldn’t expect Richard Ashcroft and co’s peculiarly Northern English psychedelic vibes to catch on in the MTV-dominated late nineties.

When The Verve returned to their native Wigan and played to 33,000 fans at Haigh Hall in May 1998, it seemed as if they would be one of the few exceptions to the ruthless cull of Britpop-era indie bands that was happening in the late-‘90s. However, a post-show fight during the subsequent European tour caused Nick McCabe to quit, leaving the band in turmoil and minus one of its twin creative engines. They limped on to the end of the tour that August, before finally confirming their dissolution in April 1999.

This, however, didn’t prove to be the final chapter in The Verve’s career. A second reunion was announced in 2007, with a small six-show UK tour selling out in under 20 minutes that November. In 2008, The Verve headlined Glastonbury Festival, taking the bold step of closing the show by debuting a brand new single, ‘Love Is Noise’, a krautrock-tinged oddity that promised an interesting new beginning for the band. However, the eventual album itself, punningly titled Forth, proved to be an anaemic and forgettable ordeal, utterly lacking the soaring and spiralling dynamics of their heyday. Following another tour, everything was mothballed again the next year, with Ashcroft declaring in 2010 that The Verve “is over for good”.

As its 20th anniversary passes, though, Urban Hymns is a cultural artefact that bears revisiting. Personally, it has always been in second place in their discography behind A Northern Soul, an album that really does need wider appreciation by the public at large. But while some have always derided it as a totem of Britpop-era jingoism, Urban Hymns is a marker of a very recent past that was simply much more optimistic – when the drugs did work – as well as a signpost for the future of British rock, for better or worse.

Listen to Urban Hymns by The Verve here via Spotify, and tell us what you think below!