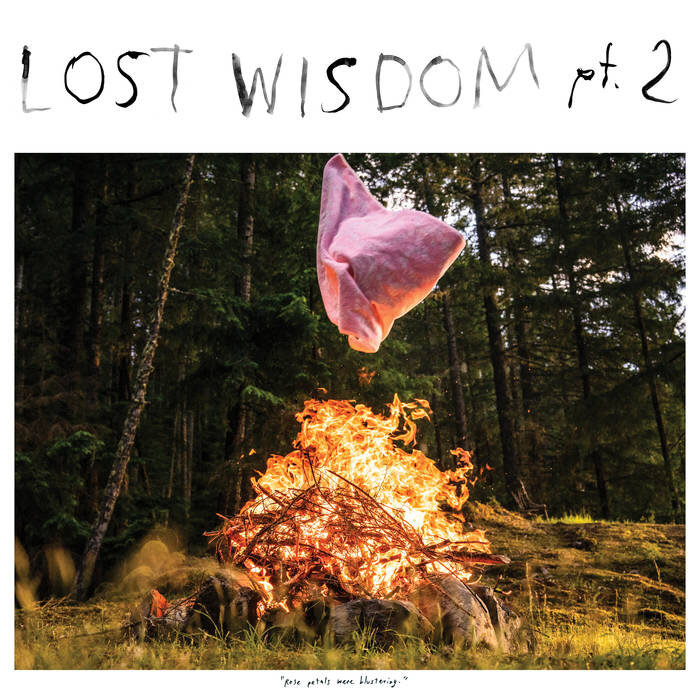 It’s impossible to discuss this new release from Mount Eerie, the brainchild of Washington-based folk artist Phil Elverum, without drawing reference to his previous two efforts and the context surrounding them. Whether it be 2017’s A Crow Looked At Me or 2018’s Now Only, any listener will be well aware of the personal tragedy that befell Elverum in 2016, and how both of those records were essentially an exhibition of desperately heart-breaking, mournful catharsis set to music. The unmistakably literal yet achingly genuine descriptions of both his deepest, darkest emotions, and his memories of an untroubled past, intertwined with flourishes of poetic imagery, have since become a unique, defining characteristic of Mount Eerie’s work.

On Lost Wisdom, Pt. 2, a sequel to Elverum’s 2008 release, we are offered more of the same. A further reference to his tragedy can be heard within the first three minutes of the album, via the extremely poignant lyric, “When I was younger, and didn’t know, I used to walk around basically begging the sky for some calamity to challenge my foundation. So, imagine what it was like to watch up close a loved one die.” However, similarly to the original Lost Wisdom album, this is a collaborative affair, as Elverum welcomes back Canadian singer Julie Doiron, whose vocals throw an extra layer of colour into the mix, contrasting effectively with Elverum’s dejected tones. Their harmonies are a standout feature of arguably the most accessible tracks on the album, the lead single ‘Love Without Possession’ and the closing number ‘Belief Pt. 2’.

However, for every silver lining there is a black cloud. Whilst on his previous efforts, Mount Eerie was able to get away with his excessively wordy lyrical passages, often scrambling frantically to keep up with the comparatively more conventional rhythm of the instrumental, the addition of a guest vocalist occasionally results in clashes between Elverum and Doiron’s voices. A case in point, taken from the opening track ‘Belief’, is the lyric “trying to stop clinging to a dream and let an old idea of love dissipate back into formless rolling waves of discomfort and uncertainty”, which the duo somehow manages to fit into five bars. Although this is one of many phenomenal lines of poetry that this album has to offer, the pair’s attempt at juxtaposing the lyric to the instrumental accompaniment while simultaneously trying to keep up with each other does not allow the listener a single moment’s respite, and is sometimes unpleasing to the ear.

Ultimately, Lost Wisdom, Pt. 2 is sure to elicit many of the same responses to Mount Eerie’s previous two works, as stylistically, aside from Julie Doiron’s contributions, the result is more of a continuation rather than a development. There is undoubtedly a very specific time and place for music like this. One can expect those unfortunate enough to have suffered a similar tragedy to that of Elverum’s to identify strongly with the themes explored here. However, with the possible exception of ‘Love Without Possession’ and ‘Belief Pt. 2’, this album is not to be listened to for enjoyment. Nor is it to be listened to by virtue of its musical characteristics, which are, for the most part, unspectacular. Yet that’s perfectly fine, as it is fairly clear that neither of those were the artists’ intention when crafting this record. As expected, the music merely plays second fiddle to the lyrical aspect, at which Phil Elverum truly is a wonder to behold. (6/10) (George McKenna)

Listen to Lost Wisdom, Pt. 2 by Mount Eerie & Julie Doiron here via Spotify, and tell us what you think below!