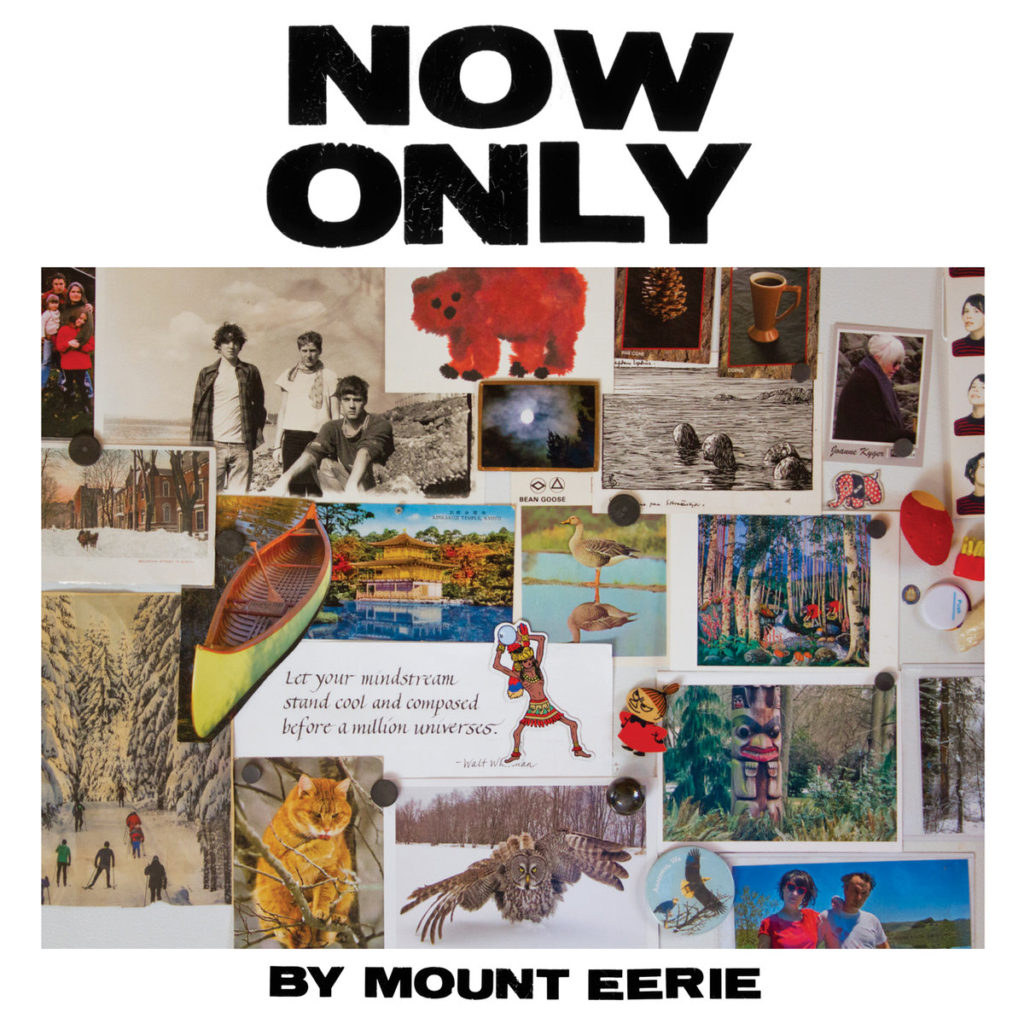 Phil Elverum’s ninth LP ‘Now Only’ is a record with more questions than answers, but which develops superbly on what was a decade-defining album.

Music is a powerful tool. Music can be open and honest. Music can break you. It has been one year since Phil Elverum, under his Mount Eerie guise, released A Crow Looked At Me – a stark and defining album driven by death that is achingly frank in its lyricism that unites all in its narrative. The album, painful in its openness, captured a moment whose tragedy it described was completely unrelatable to most, yet its humanism allowed it to remain unrelentingly familiar to all who decided to eavesdrop upon Elverum’s pain.

Now Only, its successor, serves as a wonderful companion piece to A Crow Looked At Me. Where the latter depicted a moment in time, this is an album which focuses on Elverum’s lifelong relationship with life and death. From early experiences of not understanding the significance of the Bible verse he read at his great-grandfather’s funeral (‘Distortion’), to the conflict he experiences with his pain (“I don’t want to live with this feeling any longer than I have to / But also I don’t want you to be gone”) today during ‘Earth’.

Elverum’s ninth LP continues the journey from A Crow Looked At Me by adding tinges of optimism littered throughout the record. Fond memories of Geneviève are harked back to frequently, but none more harrowing than during LP opener ‘Tintin In Tibet’. While it’s the most musically cluttered track during the album, it’s also the shortest in length but the most vivid in its descriptive powers, and immediately sets the tone for the pilgrimage that is to come.

Musically, Now Only is much more expansive than its predecessor; the guitars are as pop-orientated as Elverum has been in over half a decade. ‘Earth’ features shimmering lo-fi guitars which provide a brief surge of enthusiasm which conflicts masterfully with the bare emotion of the lyrics –it may only be a brief flicker, yet it remains a significant moment in the record’s, and Elverum’s, story.

Title track ‘Now Only’ allows one to meditate over what it is they are listening to. The outright discrepancy between the chorus’ uplifting melody and its lyrics are a stark reminder of what is going on – as if one could forget (“But people get cancer and die / People get hit by trucks and die / People just living their lives / Get erased for no reason”). Before the track discusses the irony of his wife’s death being the catalyst for the most defining part of his career when he sings: “At a music festival that had paid to fly me in / To play death songs to a bunch of young people on drugs”. The track is full of conflict and challenges the listener with its dark humour in a manner that’s almost too uncomfortable.

Now Only is likely to remain a complex listen. It would be too simple to state that this is a continued eulogy, for this is a record which challenges in its undercurrent of hostility regarding death, and it’s an intense experience. ‘Distortion’ rallies through proto-punk, twee folk and alternative country in its 11 minutes of unflinching prose and, in doing so, reveals itself as the album’s true highlight.

Fundamentally, Now Only is an album built around the internal process of dealing with death and its aftermath – we are just lucky enough to be able to listen to the process. This is a record with more questions than answers that develops superbly on what was already a decade-defining album. It feels strange to call a record of harrowing lyricism and open-ended instrumentals an utterly immersive listen, but Now Only is just that: complex, beguiling and, ultimately, the best thing Elverum has ever released. (9/10) (John Tindale)

But what did you at home think? Let us know via Twitter after you listen to the album below.