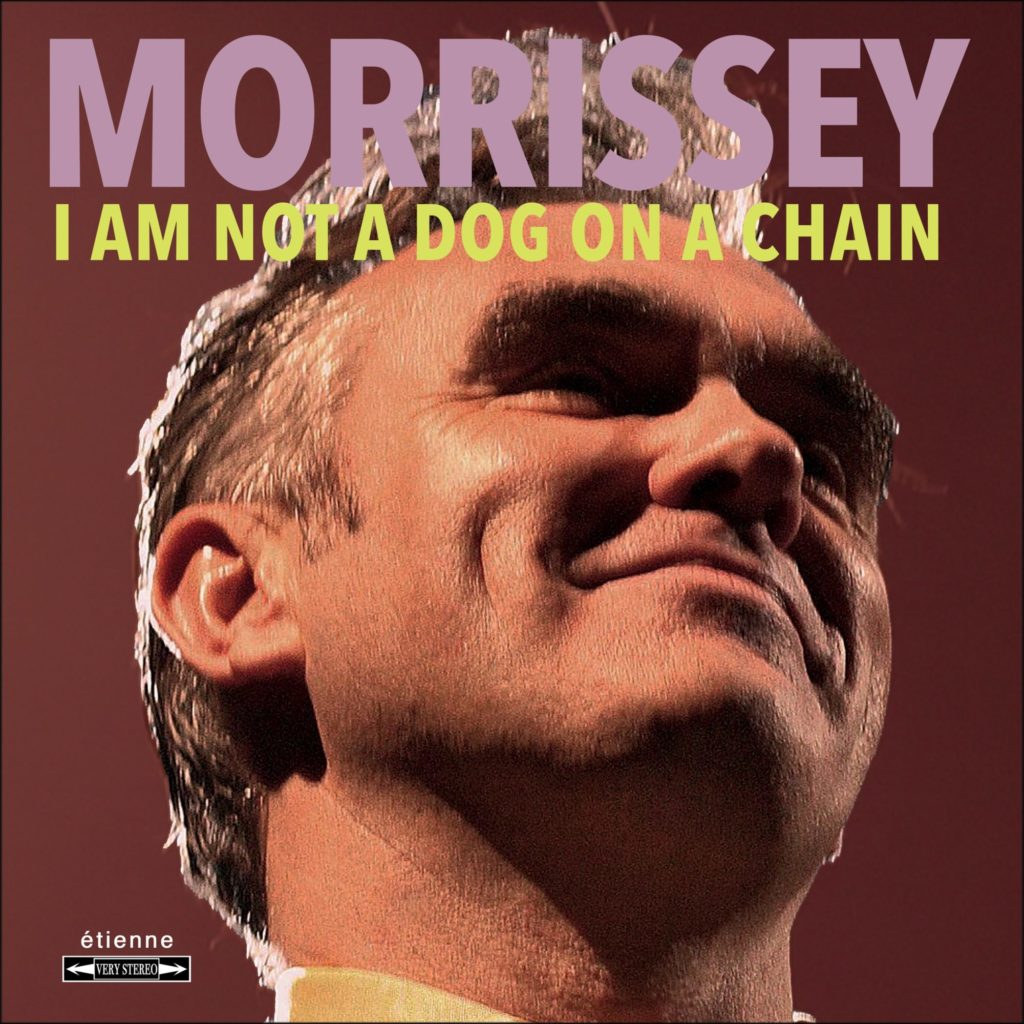 It won’t do anything to win back any previous fans, but Morrissey’s latest LP ‘I Am Not A Dog On A Chain’ is better than his recent efforts.

We’ve all got that one friend or family member. You know the one – who frequently blurts out outrageous statements that clearly have not been fully thought through, or at least have been phrased in such a way so as to be deliberately provocative. How do we deal with these people? Typically, we challenge their arguments on an individual basis, yet reserve judgement on their character as a whole because we, unlike most people, know the person that they are deep down, and the good that they’re truly capable of.

Understandably, this mindset is very difficult to transfer from friends and family to celebrities. However, that doesn’t mean there’s no reason why we shouldn’t do it. British media has recently experienced the tragic consequences of what a lack of forgiveness within the public realm can lead to. This brings us on to Morrissey. He’s fuelled more than his fair share of controversy in recent years, whether it be his heavy-handed remarks about Chinese people, his overt support for far-right political party For Britain, or his questionable comments about London mayor Sadiq Khan, many of which you’d have no way of justifying, and really shouldn’t let him get away with.

Yet without access to what actually goes on in Morrissey’s head, do we really have the right to denounce every aspect of his character, let alone smear those who have the audacity to play in his backing band, collaborate with him, or support him on tour? Sure, we are privy to a few glimpses, whether they be what has already been documented about his upbringing, or his relative unease during interviews, but as the man himself once sang, “How can anybody possibly know how I feel?” It might just be time to heed what the legendary Nick Cave said in an open letter last year, “perhaps it is better to simply let Morrissey have his views, challenge them when and wherever possible, but allow his music to live on”. Consequently, this shall be the approach taken in this review. If this isn’t your schtick, here’s a Quietus article you can read instead. Otherwise, let’s press on.

I Am Not A Dog On A Chain comes off the back of both 2017’s underwhelming Low In High School and 2019’s California Son, a covers album that, similarly with most covers albums, just screamed “cash grab”. With both his reputation and the critical reception of his musical output at an all-time low, this album desperately needed to be that spark, that ray of sunshine that would win back all those fans whom he’d seemingly disillusioned, or as some would put it, “betrayed”. A lot was at stake here. It had to be the ultimate compelling statement, the smack in the face to all the critics who’d previously written him off. It is evident that Morrissey himself felt this pressure, striving to produce an album that producer Joe Chiccarelli would later describe as his “boldest and most adventurous album yet”. Strong words, for sure, but does it hold up to scrutiny?

Well, let’s begin by saying that it’s certainly not worse than Low In High School. In fact, it’s a reasonable step up in quality, possibly comparable to middling efforts such as 1995’s Southpaw Grammar or 2006’s Ringleader Of The Tormentors. But frankly, “middling” is not quite enough given the circumstances. It’s certainly more than sufficient to keep the old faithful happy, while its small flashes of experimentation may even earn him a small crop of new fans, yet one might struggle to argue that it’s quite good enough to win over the disillusioned or otherwise disinterested masses.

‘Jim Jim Falls’ kicks off the record, and it’s easily one of the most musically accessible tracks Morrissey has on offer. Lyrically, however, his trademark, cold-hearted persona contrasts with the anthemic nature of the chorus, with lines such as “if you’re gonna kill yourself, then to save face, get on with it.” I wouldn’t be putting Morrissey forward for a role at the Samaritans any time soon, that’s for sure. Regardless, while this contradiction may be off-putting for some, it’s nonetheless a strong opener.

The two lead singles come up next. Firstly, ‘Love Is On Its Way Out’ is the first sign of experimentation on this album. In the verses, Morrissey’s despondent lyrics compliment what is a moody, minor key chord progression, accompanied by a backdrop of baroque-inspired synths, while the chorus is performed almost exclusively by a dreamy, yet distinctly haunting choir. Although it may be a little brief and rather subtle, hence the lukewarm reception upon initial release, it works well within the context of the album. ‘Bobby, Don’t You Think They Know?’, however, is far from subtle. Featuring veteran soul singer Thelma Houston’s bombastic ad-lib vocals, and clocking in at just under six minutes, the production flaunts a Phil Spector-esque “wall of sound” technique, consisting of thunderous drum beats and vibrant keyboard splashes. But the cherry on top is the marvellous, jazzy instrumental section, particularly the captivating organ solo, that merely provides an additional layer of bombast to this already action-packed tune. It’s certainly far more intriguing than the not-too-dissimilarly titled ‘Jacky’s Only Happy When She’s Up On The Stage’ from a few years back.

This is followed by the title track, and it doesn’t take long to realise that this song is essentially Morrissey setting out the bait for all his haters. From all-too-familiar jabs at the press (“I do not read newspapers, they are troublemakers” is the new “Stop watching the news, because the news conspires to frighten you”) to critiques of mob culture (“Maybe I’ll be skinned alive by Canada Goose because of my views”), these lyrics are sure to induce their fair share of eye rolls from his detractors, as well as cheers of support from his more steadfast defenders.

Next, we get a cluster of very solid and rather varied numbers that keep the album rolling along at a decent pace. We return to some classic Morrissey of old with ‘What Kind Of People Live In These Houses?’, where Moz delivers an array of either mildly amusing or just plain ridiculous forced rhymes and alliteration, from “What kind of sad dad scratches in this crash-pad?” to “Dogface in a duplex, boisterous in cloisters”, over a jangly indie-pop instrumental that sounds like it could have been lifted from any recent Idlewild album (not a bad thing!). ‘Knockabout World’ is another highlight, an upbeat, 80s-inspired pop tune with chiming, high reverb guitar strums and brass-infused crescendos, while Morrissey’s baritone crooning is very much in its element here.

The brass continues with ‘Darling, I Hug A Pillow’, where the jaunty, mariachi trumpets conflict with the expressions of self-pity that permeate the lyrical content, yet this conflict isn’t necessarily detrimental, instead giving the impression that Moz is parodying himself, whether intentionally or otherwise, given how frequently such lyrical themes have arisen and continue to arise within his lengthy back catalogue. I mean, the song is literally called ‘Darling, I Hug A Pillow’, for goodness’ sake! We get another glimpse into Morrissey’s past with the nostalgic ‘Once I Saw The River Clean’, where he reminisces about walking with his grandmother, while the fiddle motifs imbue the song with an undeniably Celtic feel, thus connecting with his Irish heritage. It’s a rare moment of sentimentality on Moz’s part, which should ultimately be treasured. Even the piano-led funeral dirge that is ‘The Truth About Ruth’ is a worthy listen. His use of the harmonic minor scale gives the track a certain Middle Eastern vibe, probably a hangover from the Low In High School era, and his odes to Israel therein.

The album stumbles slightly with the eight-minute long ‘The Secret Of Music’, which does very little to justify its place on the album, let alone its length, before proceedings are wrapped up with the pleasant, if not a little generic closer ‘My Hurling Days Are Done’, where the choir re-enters the fray and provides a rather angelic contrast to Morrissey’s low-key warbling. Quite fitting, seeing as the song itself deals with the theme of aging, and how the time we’ve got in between birth and death really is too short.

Overall, there are honestly very few elements of I Am Not A Dog On A Chain that can be pinpointed as genuine drawbacks, at least compared with other efforts within his discography. Perhaps it’s lacking a bona fide singalong anthem, akin to ‘First Of The Gang To Die’ or ‘I’m Throwing My Arms Around Paris’ (“crap R.E.M. B-side”, are you kidding me?), or a no-holds-barred, up-tempo rocker, examples of which were aplenty on 2009’s Years Of Refusal, but even so, I Am Not A Dog On A Chain stands perfectly well on its own two feet. It’s not the masterpiece Morrissey was desperately in need of, hence one might decry that it’s too little too late, but context aside, it’s another reasonably worthy chapter within a fine musical career. (6/10) (George McKenna)

Listen to I Am Not A Dog On A Chain by Morrissey here via Spotify, and tell us what you think below!