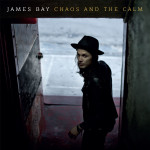 Front cover of ‘Chaos And The Calm’

Hertfordshire-born singer-songwriter James Bay, this year’s recipient of the Brit Awards’ ‘Critics Choice’ Award, has got virtually all of the music press baffled. Just who on earth are these ‘critics’? Do they simply mean Republic’s A&R men? Because aside from looking photogenic and wearing a jaunty hat, nobody seems to be able to explain why Bay deserves any kind of special attention at all. A fellow graduate of piano-botherer Tom Odell at the Brighton Institute of Modern Music, our expectation for his debut long-player Chaos And The Calm was therefore suitably low. Looking like it’s racing to the Number One spot in the UK albums chart, Bay has the advantage of the best possible start to his musical career – but aside from an expertly executed marketing campaign, there’s absolutely nothing in its twelve tracks that explains why people should be buying it in such great numbers.

Part of the problem is that Bay sticks almost entirely to one method of vocal modulation – that of overwrought yet inauthentic emoting designed to fill soulless corporate-sponsored venues. The ubiquitous current single ‘Hold Back The River’ is the worst offender, nicking its folky guitar intro from Nick Drake and building into a climax so anodyne you want to stuff Biros into your ears. The indie rock on cruise control ‘Best Fake Smile’ is a soporific and tedious tale of a waitress wanting to quit her job. The appalling ‘Craving’ sees him cast an unimaginative eye on the mundanities of everyday life (“everyone’s life the same as yesterday / just like the ticking of clocks”). The long-distance relationship tale of ‘Scars’ is future X Factor audition clutter, with lowest common denominator lyrics like “and as soon as I can hold you once again / I won’t let go of you I swear”. Which brings us to the other major problem: Bay’s lyrics consistently sound like they’ve been generated by a computer algorithm in ‘everyman breakup’ mode, and when they’re delivered with such plastic, dead-eyed efficiency, you feel as if a little bit of your soul is dying by simply being within earshot of it.

Which completely ruins what might otherwise have been an excusable record, since the actual music is sometimes surprisingly varied and, in a few places, even shows promise. ‘If You Ever Want To Be In Love’ is the kind of thing Fleetwood Mac would have written in their sleep. ‘Collide’ recalls the bluesy garage-rock chops of Jack White’s solo career; ‘Incomplete’ would be a yearning slice of Americana if not for Bay’s unsuitable voice; whereas the passable R&B feel of ‘When We Were On Fire’ showcases his vocals properly. So while many will utterly detest Bay and his overly-familiar schtick, his debut does at least attempt to cover more territory than the same old tried-and-tested pop balladry to which so many of his contemporaries have stuck so rigidly, saving it from total doom. However, it’s so devoid of creativity and heart that it should probably have just been called The Calm. (3/10)