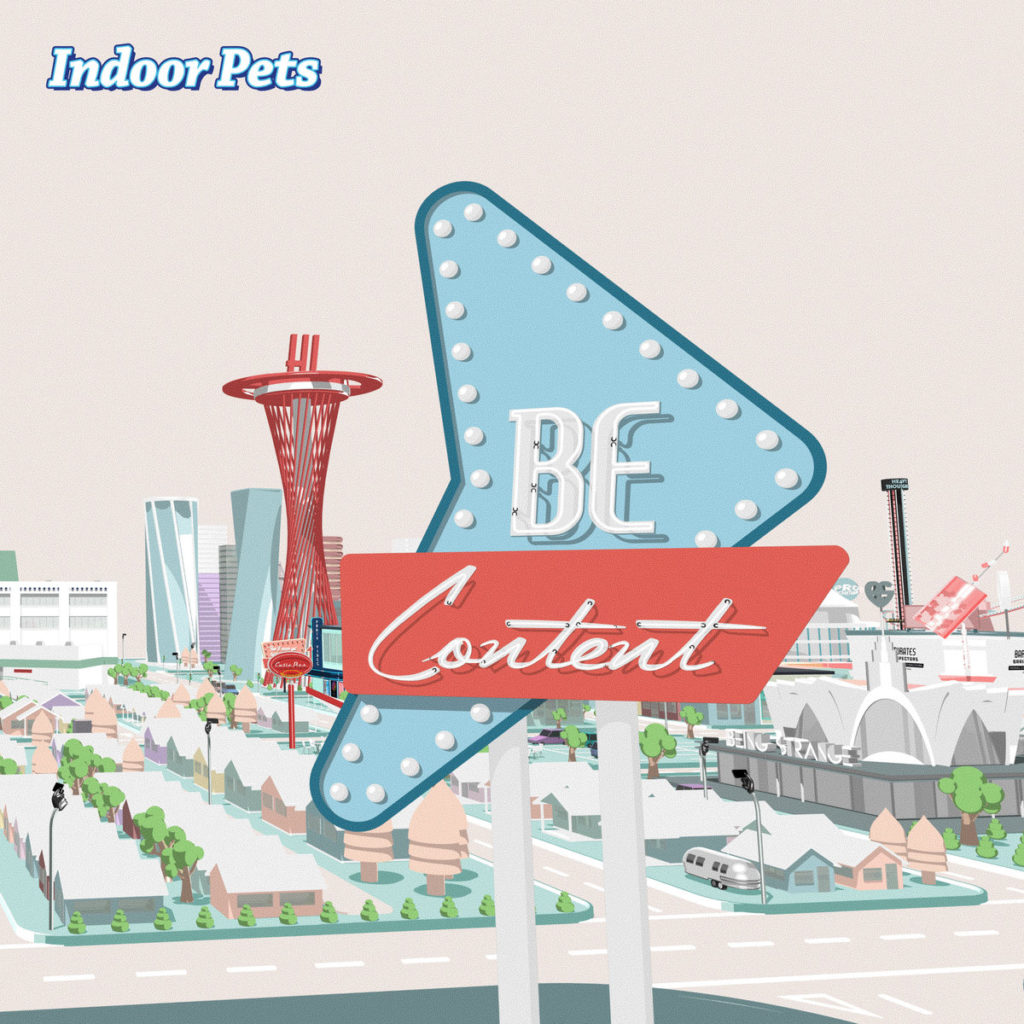 Indoor Pets’ story so far has been a bit of a struggle, but ‘Be Content’ is a great pay-off, brimming with fun and loud indie-pop.

While on tour with Bad Sounds back in October, Indoor Pets had approximately £10,000 worth of musical equipment stolen from their van. However, instead of mourning the loss of their prized personal possessions, they were adamant that the show would go on, and even resorted to selling tea towels to raise money for new gear.

Despite tackling some weighty lyrical topics, their music mirrors this level of buoyancy. One or two comparisons to Weezer have been made (going by their Twitter account, it seems like a lot more), and listening to Be Content, its easy to understand why. Mixed by Claudius Mittendorfer, who worked with – you guessed it – Weezer on 2016’s The White Album, it’s an effortlessly charming debut, filled to the brim with crunchy yet colourful guitar work and joyful, anthemic choruses. Case in point, the rollicking ‘Teriyaki’, which doesn’t sound too dissimilar to the kind of urgent indie-pop The Vaccines mastered on their debut album. There’s also a lovely slow number in the form of ‘The Mapping Of Dandruff’, whose heartbreaking “I’m so human it hurts” refrain is amplified by the swirling guitars and kaleidoscopic drumming.

Where Be Content truly excels, though, is in frontman Jamie Glass’s candid yet humorous lyricism. He delves into a handful of personal issues, such as anxiety on mid-album highlight ‘Heavy Thoughts’ (“Heavy thoughts / I don’t like it / But we can fight, terrified”), but will often handle them with a wink and a smile. On ‘Pro Procrastinator’, he paints himself as a layabout that revels in his unhealthy lifestyle (“I drink pop, drink pop for the sugar/I speak French because I’ve got nothing Toulouse”), while on ‘Being Strange’ and opener ‘Hi’, he openly and defiantly embraces his imperfections (“I’ll never graduate in rock and roll to the debate team”).

The album could benefit from being a little shorter, with songs such as ‘Couch’ and ‘Good Enough’ operating as mere filler, and its clear throughout that Indoor Pets aren’t aiming to reinvent the wheel in any way. Sure, Be Content isn’t exactly original, but it’s impossible to deny that it’s a hell of a lot of fun. (7/10) (Matty Watkin)

Listen to Be Content by Indoor Pets here via Spotify, and tell us what you think below!