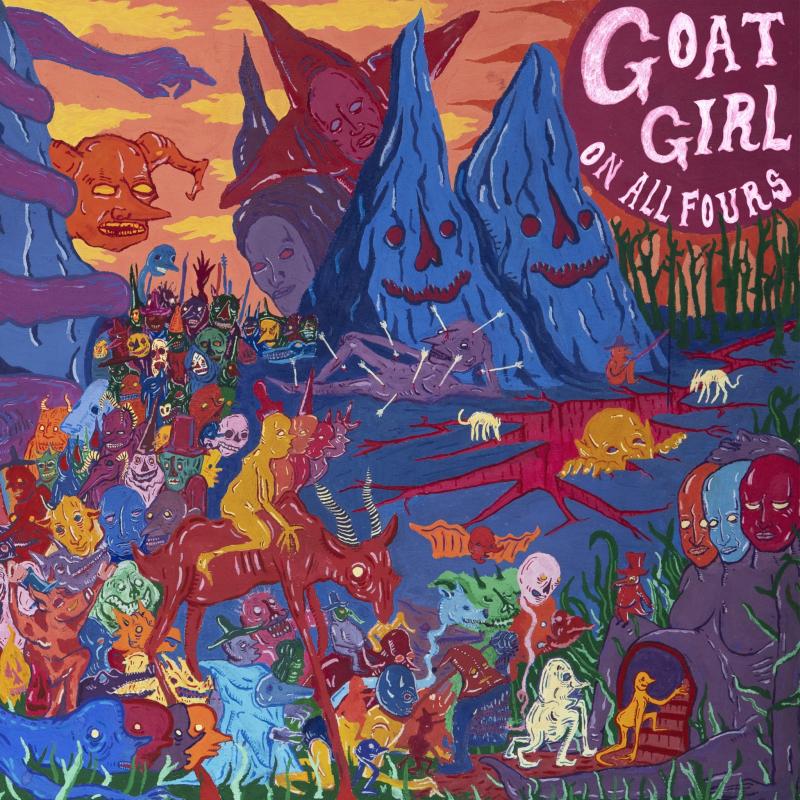 Reimagining their post-punk sound along more diverse lines, Goat Girl’s second album ‘On All Fours’ is an unmitigated triumph.

Sometimes the cover of something is more illuminating than one would think. The gloopy, hellish, dystopian creatures on Goat Girl’s second album On All Fours cover truly set the tone for the record at hand. The mixture of ‘Adventure Time’-esque, dumbfounded, silly smiling mountains and somehow lewd-looking three-headed titans with gaping holes in their bellies serve as menacing signs of the surrealistic brushstrokes through which Goat Girl paint the chaos of our inner and outer world on their new album. Whilst written before the chaos of 2020 ensued, the themes of global warming, losing grip on reality and the ugliness of human extortion in the West discussed in the album are now more centre than ever, and Goat Girl are back with an album more refined than its predecessor without losing their grit.

Hailing from South London, the quartet initially caught the eye of the music world with their murky, fuzzy guitar riffs and confrontational lyrics resulting in a quick sign with Rough Trade, their debut album confirming the hype and branding Goat Girl as one of the leading bands in post-punk. With On All Fours, they return as a more electronic band, yet just as melodic and lyrically cutting as before. Gone might be the slacker guitar riffs that were front and centre, now Goat Girl are serving sonic homogeneity in the best way. With a menacing atmosphere throughout, it’s as if they took most of what plagues the Western world – global warming denial, mental illness, lack of empathy and community – and turned it into a musical rumination that doesn’t feel patronising or a downer. Instead, On All Fours shows Goat Girl as a more mature band with even stronger songwriting chops than before.

The first part of the record seems to focus on the big picture, zooming out from the mundaneness of everyday life. ‘Pest’ goes from ominous and slow to galloping into a groove, sneaking in arpeggiators and sweet vocal harmonies, singing about the pests from the West and introducing the sonic identity of the album – moody, bass heavy and full of melodic play between vocals, synths and guitars. ‘Badibaba’ brings a more surreal, spell-like take on global warming denial, witch-like in its vocals. Then there’s ‘The Crack’ – a mean, heavy track with a sprinkling of frog chorus and violin, a psychedelic take on the sickness of the Earth – it becoming uninhabitable, humans running off into space looking for a second home having ignored all the warning signs.

This all seems to hit all too close to home, so Goat Girl jump towards a certain lightness with tracks such as ‘Closing In’ and ‘Anxiety Feels’. Whilst both deal with mental health issues, they’re more dreamlike sonically, reigning in the drone of bass and sounding less threatening – the melancholic vocal melodies allowing one to distance themselves from the reality of the lyrics, discussing pros and cons of popping pills for calm. It’s a welcome change of pace before Goat Girl chomp down on the listener yet again, with earworm bass melodies on the track ‘They Bite On You’, likening scabies to the overwhelming “itch” caused by getting lost in social media reality and its never-ending spew of over-the-top negativity, positivity and endless capitalism. It seems that Goat Girl are not here to give you a break.

With many stand out tracks, On All Fours is a joy, offering a delicious musical intensity with catchy melodies and a reimagined sound for Goat Girl. It might not have the same sharpness that their debut had with its tasty ruggedness and teenage ruthlessness, but On All Fours shows them as tight as they have ever been, every track a tasty morsel with thought behind it. (9/10) (Aiste Samuchovaite)

Listen to On All Fours by Goat Girl here via Spotify, and tell us what you think below!