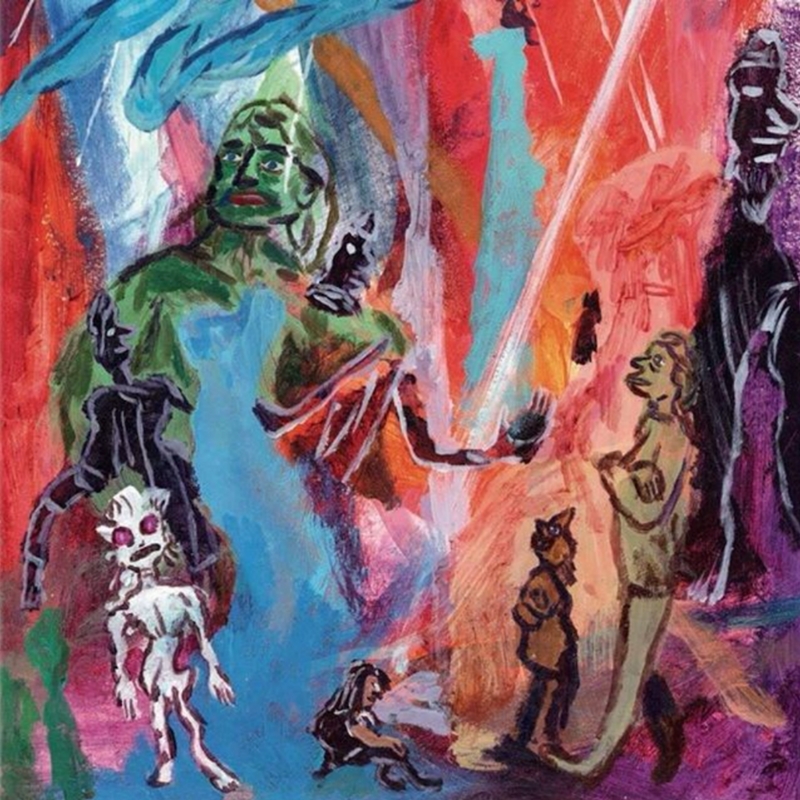 “Creep on the train… I’d like to smash your head in”, chants Goat Girl frontwoman Clottie Cream on ‘Creep’. Rough Trade’s latest noisemakers from Brixton have been attracting a buzz over the last couple of years, and were the last band to feature in the late NME’s Radar section (may it rest in peace). In that interview, they made their manifesto clear – “there’s social awareness and social commentary because of the crazy town we’re living in.” However, don’t be expecting ‘Waterloo Sunset’ – Goat Girl and their self-titled debut album point their crosshairs at the seedier side of everyday London life and confront it head-on.

Opening instrumental ‘Salty Sounds’ is an apt descriptor of the songs to follow. ‘Burn The Stake’ rhymes “castrate” with “gyrate” and “latte breaks”, three phrases which provide all you need to know about the sentiments of that song. Aforementioned album highlight ‘Creep’ takes aim at weird guys on public transport, backed by a fantastic instrumental featuring trippy hoedown fiddle. Many songs on Goat Girl follow in this vein: wonky country-punk, clearly influenced by the likes of The Damned, Siouxsie & The Banshees and The Gun Club.

However, Goat Girl’s best tracks are the ones that break this mould. ‘Cracker Drool’ opens with a drum machine beat that could have been lifted from an early Depeche Mode single, and spoken-word ‘A Swamp Dog’s Tale’ comes out of nowhere, spitting bile – “you could never dream to be like this”, taunts a male voice over a stumbling rhythm. There are plenty of wacky sounds on the album, with fat and fuzzy synth bass on ‘Viper Fish’ and some waves of Beatles-y backwards guitar that rush in from all angles on ‘Slowly Reclines’. This subtle experimentalism is refreshing, and sets the band apart from their sound-alikes, like Wolf Alice and Slaves in particular.

Midway into listening to Goat Girl, though, one begins to realise that song lengths are becoming problematic. Ramones showed us just how much you could pack into a sub-two-minute song – but at least they knew when to stop. Goat Girl contains an impressive 19 songs, clocking in at a shade over 40 minutes. To cram a multitude of little songs into an average-length record is a noble concept, and one that Thundercat pulled off on last year’s Drunk with great results.

However, on Goat Girl, that sense of ruthless economy just doesn’t have the same effect. Too many tracks feel like rough sketches, half-finished and often unnecessary. Take ‘Moonlit Monkey’, for example. It’s a great little tune, with stabbing keyboards and a rumbling, dusty rhythm, but it disappears before you can get to know it. It’s as though Goat Girl has simply shoved everything they’ve ever recorded onto the album, regardless of how complete the songs may be. Tracks like ‘Moonlit Monkey’ and ‘Hank’s Theme’, which last for all of 40 seconds, just seem like pointless additions to the album and serve little purpose other than to frustrate the listener and suck away the momentum that Goat Girl had been building. But maybe that’s the point.

Whilst Goat Girl are clearly a band with much to say and much to be rightfully angry about, the songs on their debut album just feel too restrained. Their mish-mash of country, punk and goth influences is similar to that of fellow Londoners Fat White Family – but whereas the Fat Whites know when to release a moment of pure chaos, Goat Girl feels like the band is always tugging back on the lead. Whilst Clottie Cream’s leering croon is often satisfying, her vocals never seem to change pace, and her only dynamic becomes a little tiresome across entirety of the album. Many tracks, too, seem to follow that long-established soft-to-loud-to-soft-again grunge formula, which really doesn’t do the band any favours – especially when the loud bits aren’t quite as loud as you’d like them to be. Goat Girl have potential – they just need to learn when to unleash hell. (7/10) (Louis Marlow)

Listen to Goat Girl by Goat Girl here via Spotify, and tell us what you think below!