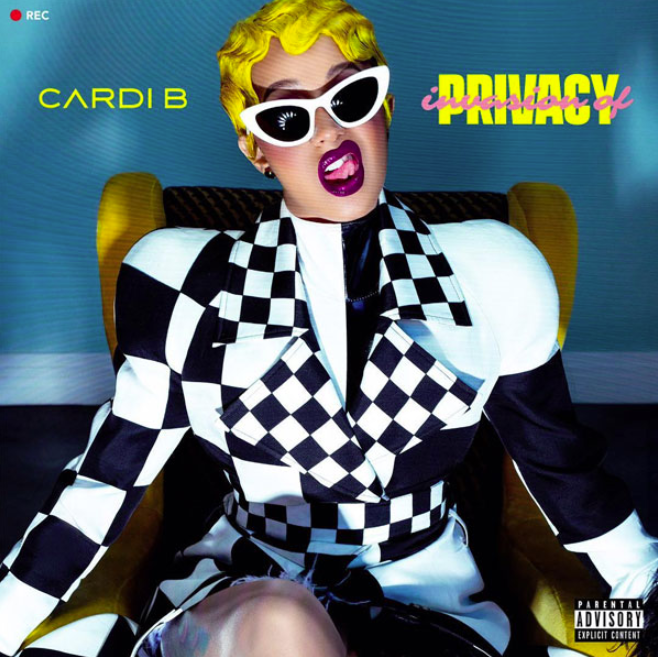 A divisive figure releases what’s likely to be a divisive debut album, but Cardi B’s ‘Invasion Of Privacy’ is undeniably an entertaining listen.

On Invasion Of Privacy, Cardi B makes one thing clear: you may hear the most intimate, passionate details of her life, but she draws the lines, she’s her own spokesperson and defines herself. In fact, all throughout Belcalis Almanzar’s rise to fame she’s been unequivocal on this. She will not be marginalised or defined by anyone else, she takes to her Instagram and Twitter to account to discuss anything and everything from how to budget your outfit to the inclusivity of the #MeToo movement.

Over the past three years, Cardi has become an icon to some and a meme to others. Division aside, her ascension story is a modern fairytale, so much so she calls herself ‘Binderella’. Cardi B was simply a “regular, degular, shmegular Girl from the Bronx” who found financial freedom through a job as a stripper. By 2017, a brief reality TV stint and two mixtapes later, her debut single ‘Bodak Yellow’ made her the first female rapper with a solo record to top the Billboard Hot 100 since Lauryn Hill in 1998. In true hip-hop fashion, Cardi takes to her music to celebrate her achievements and new-found wealth without holding back. She’s made it, and she’s shameless.

This is the theme of opening track ‘Get Up 10’, she tells her rags to riches story on a trap beat produced by prolific Atlanta producer,= Southside. Cardi makes the vibe of the album quite clear here, saying “I was just tryna chill and make bangers”, and as listeners, we should be looking for bangers, not storylines. As the title Invasion Of Privacy implies, we should not get too wrapped up in or carried away with the minutiae of Cardi’s life.

The single ‘Be Careful’ on the surface, it is a stripped down, confessional rant on a simple organ loop with a subtle Lauryn Hill sample. She sings sweetly to her partner “Be careful with me, do you know what you doin’? / Whose feelings that you’re hurtin’ and bruisin’?” After the song’s release, many began to relate it back her very public relationship difficulties with her boyfriend, Migos member Offset. The song was scrutinised, on social media on the basis of Cardi B not practising what she preaches, rather than the content of the song. But it’s clear throughout Invasion Of Privacy that Cardi does not hold back – if she wants to speak about something she does. On ‘Best Life’ she evens discusses Twitter controversy, with lyrics like “That’s when they came for me on Twitter with the backlash”, or “#CardiBIsSoProblematic is the hashtag”.

As a debut, Invasion Of Privacy does everything to set Cardi B off on the right foot. Industry big names such as DJ Mustard and Cashmere Cat, are enlisted to produce songs, surprisingly BADBADNOTGOOD make an appearance on track ‘Best Life’, while other guest features include SZA, 21 Savage, Chance The Rapper and YG.

Cardi’s lyrical prowess and punchlines are striking; she drops bombshells like “I’m tryna whip the foreign like a badass child”. She playfully proclaims “My little 15 minutes lasting long as hell, huh?” on ‘I Do’.  Although the album is predominately trap music influenced, it’s kept interesting by a range of melodies and samples. ‘Bickenhead’ samples ‘Chickenhead’ by Project Pat, while ‘I Like It’ interpolates Pete Rodriguez’s ‘I Like It Like That’ into parts of the song.

This album makes it clear that Cardi’s not here to be palatable, she’s by no means a Beyonce or a Lauryn Hill, she won’t make sense to everyone. But admittedly, the phrase “Your bitch wanna party with Cardi/Cartier Bardi in a ‘Rari” rolls off the tongue smoothly; it’s all about instant gratification. Some see Cardi B on par with her female rap predecessors. So much so, she was called on stage during Hot 97’s Summer Jam music festival to perform with Remy Ma, The Lady of Rage, MC Lyte, Young M.A., Monie Love, Lil’ Kim and Queen Latifah.

Realistically, Cardi B sits in her own little lane. But her style draws a thick, white line between the two types of hip-hop consumers: the type who are willing to except character and charisma as a valid contribution to rap, and those who pride themselves on listening to rapper with technical skill and ability. Invasion Of Privacy ultimately doesn’t fully reflect Cardi’s exceptional natural ability, but the truth is that she probably doesn’t care, and you shouldn’t either. (6/10) (Benita Barden)

Listen to Invasion Of Privacy by Cardi B here via Spotify, and tell us what you think below!