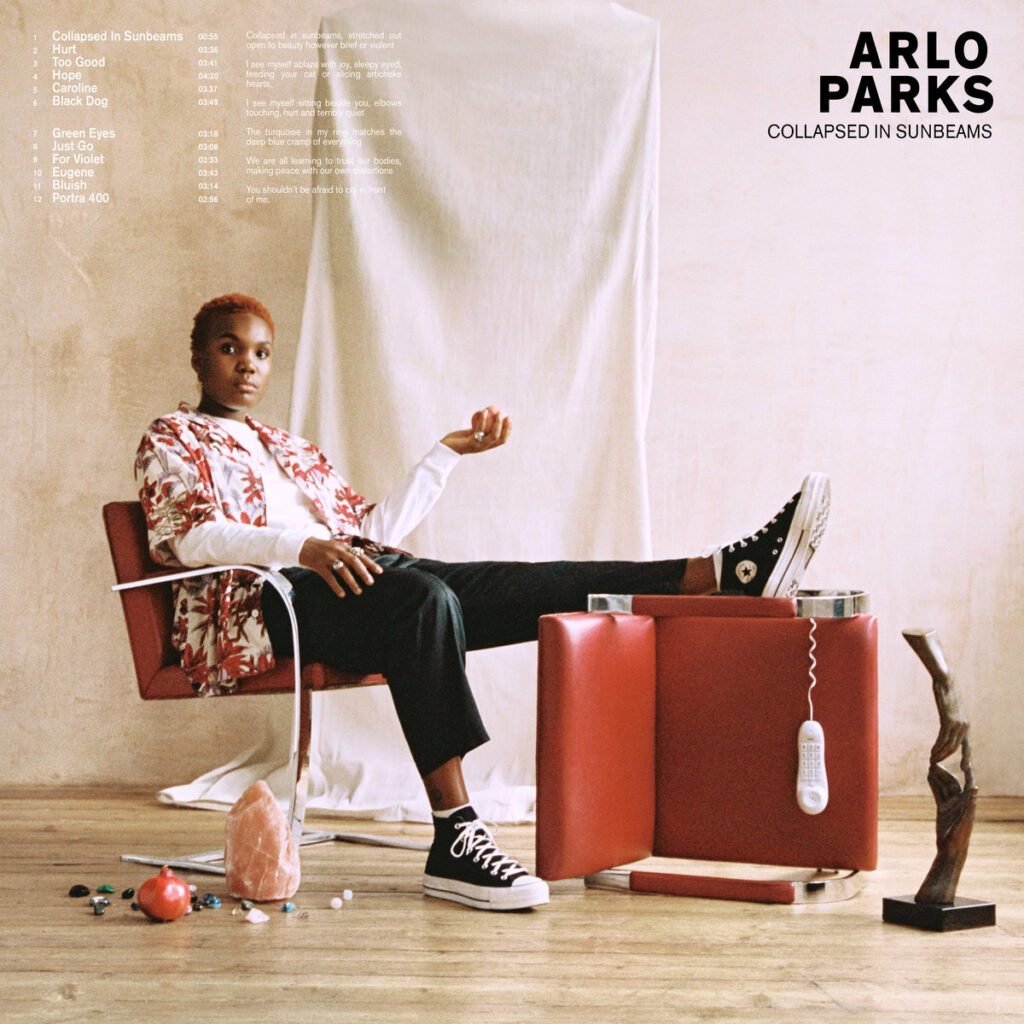 Emotions are only dealt with on a superficial level on Arlo Parks’ disappointing debut album ‘Collapsed In Sunbeams’.

There certainly weren’t many up-and-coming artists who had a more successful year in music than Arlo Parks in 2020. Her momentum seemed to grow incongruently with the dispiriting series of events which escalated from month to month. Despite the lack of live shows and promotion opportunities Parks’ music was clearly meeting with accord. A string of singles, built off the back of two successful EPs in 2019, captured the attention of almost all the relevant playlist compilers, influential radio DJs and streaming platforms out there. And while the pandemic may have scuppered the plans of many budding artists, Parks’ output detailing topics such as isolation, depression and relationship strife seemed to tap into the experiences of many and perhaps propelled her to greater heights given the circumstances.

It would be understandable then to assume that Collapsed In Sunbeams would thoroughly deliver on Parks’ artistic promise and kick-start her new year with snowballing acclaim and notoriety. In this particular case however, the latter will prove far truer than the former. In almost all aspects, this is a debut of hugely underwhelming proportions. One of the main issues is that, for an album so ostensibly drenched in emotion in lyrical terms, it’s remarkable how little genuine feeling that it all translates into. At the heart of this problem is Parks’ inability to bring a unique outlook to the theme of emotive introspection – it all feels very surface level. Yes, relatability earns eyeballs and attention, but when the lyricism is this repetitive and platitudinal there needs to be more depth to prompt greater intrigue.

Clearly Parks’ has a poetic disposition and even displays some talent in this regard, but all too often the grand statement in her songwriting relies on clichéd and previously exhausted sentiments. Probably the most egregious example of this is demonstrated in the chorus of ‘Green Eyes’, in which Parks tries to reassure a lover against some of the dissenting voices surrounding their relationship. The first verse is a fairly intriguing set up of this scenario but the conclusion she draws in the chorus; “But you’ve gotta trust how you feel inside / And shine”, feels disappointing on multiple levels. It underwhelms not only because it feels like the type of formulaic quote you’d see on a particularly trite Tumblr page, but it crucially fails to capture the nuance of the position that the Parks’ subject finds themselves in. It’s simplistic to the point of almost being unhelpful, and it preaches an idea that sounds much easier said than done. Unfortunately lines such as the refrain in ‘Green Eyes’ are far from being unique on Collapsed In Sunbeams, and are a significant part of why the album feels like it doesn’t have much substance to its emotional core.

For an artist fated as a generational storyteller, Parks’ really misses the mark in her observational tale of an ‘artsy couple’ in relationship turmoil on the track ‘Caroline’. Not only are the details of the couple’s argument barely fleshed out – beyond some one-note metaphors about “shards of glass” and feelings – but the singing in the chorus becomes tired and monotonous after a couple of listens. The lack of vocal inflection in Park’s singing voice is particularly grating at this moment in the track list.

Another vocal lowlight ironically comes in the form of the song ‘Hope’ which offers nothing of the sort for Collapsed In Sunbeams’ chances of redemption. Aside from the line “You’re not alone like you think you are / We all have scars I know it’s hard”, which approaches the offensively trite, this song is arguably where Parks’ stretches her limited vocal ability the most – and not to good effect. Her strained voice, coupled with some poor mixing on the production side of things, leads to a drone that is made doubly depressing by the middle-of-the-road lyricism. ‘Hope’ unfortunately is tediously brain-melting affair and represents perhaps the nadir in the track list.

The reality is that Parks’ vocal ability really doesn’t come close to contemporaries such as Cleo Sol, Jorja Smith or even perennial EP releaser Joy Crookes, all of whom occupy similar genre spaces in UK music today and have a far wider range with which to convey emotional depth.

Some of the instrumentals don’t amount much more than inoffensive background music – the type of lift-music that would make a pleasant interlude in one’s shopping experience, but nothing life altering. Parks’ and her collaborators offer little innovation to the genre blend of R&B, indie and soul which form the majority of the album’s musical palate. Track after track serves to compound the homogeneity of her instrumental choices, which become increasingly wearing and uninspiring. The clearest evidence of the album’s sonic unoriginality comes in the form of closer ‘Portra 400’. The song does nothing to distinguish itself as a closing statement on Parks’ debut, instead it peters out with an unvarying ending to its run-of-the-mill piano drum beat combination.

On the positive side, darker cuts like ‘Black Dog’ do go much further in accurately portraying the mood of the depressed mind in terms of the atmosphere exuded by its stripped back instrumental. Parks may be found wanting lyrically, with little more than an assertion of how “cruel” the power of the mind can be – undoubtedly true, but it feels there is more to be expressed and mined in this area. Furthermore, this next step of lyrical exploration we know is not beyond Parks’ intellectual reach – anyone who’s heard her speak in the press knows she possesses intelligent and insightful mind – which heightens the frustration that only the surface layer of mental suffering is broached, themes dealt with using only the broadest of brushstrokes.

Put simply, when listening to Collapsed In Sunbeams you cannot help but feel that this type of self-confessional music could have been executed so much more effectively. Praise isn’t guaranteed by the sheer virtue of mentioning darker societal themes – ideally there needs to be some kind of unique or original take on such an introspective lens. Sadly, on her debut effort Arlo Parks offers little of these vital ingredients that would help engagingly communicate the emotions she inspects. (4/10) (Joss Lambert)

Listen to Collapsed In Sunbeams by Arlo Parks here via Spotify, and tell us what you think below!