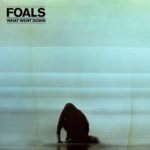 Front cover of ‘What Went Down’

With their expansive third album Holy Fire, which won this publication’s Album of the Year of 2013, Oxford’s Foals put themselves forward as the next British band to cross over into the seriously big leagues – the Number 1 albums, the awards winners, the Glastonbury headline sets – reserved for acts whose sound is able to fill the biggest spaces. Two and a half years and distribution deal with a major label later, it’s time for What Went Down to deliver on that promise.

Initial signs for their fourth album were extremely promising, with two completely different amuse-bouches served up in July. First came the fantastic desert rock of the title track, which promised something lysergically-tinged and radically distinct from the sensual, dance-influenced rave-ups of Holy Fire. This contrasted significantly with the much more familiar ‘Mountain At My Gates’, a slinky, arena-Strokes slice of indie pop boasting a piano hook so commercial you could almost mistake it for a Spotify ad jingle. These two tracks open the album one after the other, suggesting a hybridisation of their established, expansive template and something much harder-rocking. The way that the Stooges-esque, full throttle ‘What Went Down’ that lingers on one note as Yannis Philippakis roars “When I see a man I see a liar!” can segue so comfortably into something as radio-friendly as ‘Mountain…’ suggested an interesting split personality at the heart of the record.

But as What Went Down progresses, this doesn’t materialise. Instead, Foals rather disappointingly (but probably intelligently) hedge their bets, experimenting in few places and serving up more of the same in many others. This doesn’t make for a bad record in the slightest; merely the least distinctively Foals-esque record they’ve made to date, with the shimmering, clean production makes this their most radio-friendly incarnation. ‘Birch Tree’, built on a trademark shimmering guitar hook, and the synth-based ‘Give It All’, which could pass for a pop version of Yeasayer or even London Grammar, arrive next, extremely mainstream-orientated songs that don’t stick long in the memory and seem overworked. The Coldplay piano atmospherics that underpin the perfectly pleasant ‘Lonely Hunter’ near the end seem designed to be broken out on the big occasions, to fill the largest arenas and stretch to the back of the biggest of festival fields. Have Foals, dare we say it, sold out??

No, happily, is the answer, as What Went Down moves into arguably the strongest second half of a Foals album to date. The huge drums and motorik rhythms of ‘Snake Oil’, spiked with some dirty great grunge interludes, shows that Foals could potentially turn into snarling beasts in some future incarnation. This is neatly contrasted with the beautiful mood lighting of ‘Albatross’, which gently gallops from inauspicious beginnings into a finale of real beauty. The sleek, tropical vibes of ‘Night Swimmers’, which is reminiscent of Friendly Fires’ last outing Pala, shows that Foals are still willing to get funky like they did on Holy Fire. The mesmerising ‘A Knife In The Ocean’ rounds off the album with one of the greatest songs Foals have ever recorded, with a cacophonous drum pattern interacting with spindly, post-punk guitars that rise and fall in epic swells, and electronics blinking just underneath the song’s skin.

The fury and anxiety that has characterised Philippakis’s vocals and lyrics ever since their debut are noticeably more measured and reined in this time, made subservient to the music and atmosphere rather than the other way round. It used to be the star of the show, but now seems to blend into the background, and this is the only slightly niggling aspect of What Went Down. “Give me something I haven’t seen / give me a red light turning green” he sings rather dismally on ‘Give It All’, a lyric straight from page one of the Chris Martin book of songwriting. Too many of his lyrics are simply missing that erratic energy that made their earliest, math-rock recordings on Antidotes so compelling – but it has led to the listener-friendly sound that Foals are after.

Some will argue that What Went Down is the first Foals album to fail to offer any real progression from what went before, but all Foals really needed to do was to finesse and re-touch the sensual sounds of Holy Fire and Total Life Forever, rather than depart radically from them. You can hardly blame them for wanting to cash in their chips a little bit – on occasion, it admittedly does sound unsubtle in its surge for the mainstream – but for every moment they’re in cruise control such as on ‘Birch Tree’ or ‘Give It All’, they’re challenging that same audience with tracks like ‘What Went Down’ and ‘A Knife In The Ocean’ that bookend that album in spectacular style. Providing that audience is receptive enough, and has the patience to put up with the curios and irregularities that simply need to be there in order to satisfy their hardcore fans, you should expect to see Foals headlining the biggest stages of them all in 2016. (7/10)

Listen to What Went Down here!