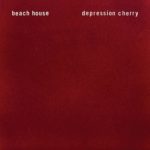 Baltimore duo Beach House have been one of the most heartening success stories of the decade so far, with their third album Teen Dream (2010) and its sumptuous follow-up Bloom (2012). Both albums echoed with achingly exquisite, sugar-sweet yet melancholic melodies, and were testament to the transportive power of all the best music. It’s somehow fitting that their fifth LP Depression Cherry should arrive right at the end of summer, with the nights starting to draw in and with autumn encroaching. Running through Beach House’s music has always been an acknowledgment of the emotional paradox of “the pleasure of sadness, and the sadness of pleasure”, as Pitchfork described it.

They’ve spent close to ten years rationalising and polishing their trademark sound, which has brought them tremendous critical acclaim and no small amount of success – they’re probably the biggest ‘small band’ in the US – so the question has become: how to move on while still providing fans with what they want to hear? Having discovered their perfect formula, Beach House were able to get away with repeating themselves once with Bloom, a spectacular victory lap for Teen Dream’s beauty, but now is the time for something a little different. That cryptic title aside, which sticks out from the rest of their discography like a sore thumb – what the hell is a ‘depression cherry’? – the album sees Victoria Legrand and Alex Scally retain that dream-like quality for which they’re so adored, but choose instead to play around at the edges, making their music more blurred and more abstract.

They’ve ventured further down the ‘sonic cathedrals’ route of My Bloody Valentine and Cocteau Twins. The everlasting, shimmering vistas of the gorgeous opener ‘Levitation’ provide the first evidence of the subtle change in Beach House’s sound. The percussion is dialled down to a faint, insistent pulse, leaving Scally’s throbbing guitar drone (reminiscent of Bloom closer ‘Irene’, incidentally) and Legrand’s gospel-influenced keyboard parts foregrounded. “There’s a place I want to take you” she sings enticingly as the first lyric, and from this point the listener can ease back under the comfort blanket of their sound. The sweeping elegance of ‘Space Song’ and ‘Beyond Love’ follow on similar lines, the former little more than a woozy, drunken slide guitar over an arpeggiated keyboard, the latter with some sonar-like pings of Scally’s guitar booming over the intro. “Tender is the night for a broken heart / who will dry your eyes when it falls apart?” Legrand intones on ‘Space Song’, and it’s just the sort of piercing, romantic insight that she’s always been fond of, showing that some things haven’t changed.

The strange lead single ‘Sparks’, debuted about a month ago, is by far the most radical departure that Beach House make on Depression Cherry from their familiar template. Scally’s almost Sonic Youth-esque guitar provides the foundation, gently working itself into a lather as Legrand’s keyboard enters the mix, jarring at first but eventually resolving itself into a work of genuine brilliance. It’s strange to listen to at first, but the tightly-wound, almost mechanical structure is very rewarding on repeated listens. The almost wordless chorus of mid-album breather ’10:37’, with extremely spare arrangement, is another quite different offering from the group. All the way through, the deep kettle drums of the last two albums have gone and been replaced with a ticking, hi-hat-based percussion that floats atop the arrangements, rather than providing their underpinning.

The other difference with Depression Cherry is in its structure: many of the tracks border six minutes in length, with Beach House messing around with the skeletons of their songs, telescoping them and taking even more time to linger and explore their thoughts before bringing things to a close. This is mainly demonstrated in the first half of the album: in the second, the listener can get a number of quick Beach House fixes in the more traditional vein. The instantly familiar waltz feeling of the circling riff on ‘PPP’ will come as a comfort to anybody potentially put off by the likes of ‘Sparks’, and the pretty but unintrusive brace of ‘Wildflower’ and ‘Bluebird’ hark way back to 2008’s Devotion in their sense of euphoric simplicity. Closer ‘Days Of Candy’ is not the grand, sweeping gesture of romance to Depression Cherry than we might have expected, not matching the shiny melodies of ‘Take Care’ or the heartbreaking pleas of ‘Irene’ on their last two albums. Instead, it revisits the subtlety of the first half, with echoing drums only dropping in halfway through its six-minute length, though the cascading guitars are suitably epic.

Though some of these songs take you to a familiar place, and some will criticise them for a lack of ambition on the second half in particular: honestly, who cares? While Beach House don’t tinker with the formula – how does one improve on perfection, some might say? – Depression Cherry does see them play around with the parameters and scope of their established sound, becoming a more ambient version of themselves than before. It admittedly lacks the huge, heart-swelling pop moments of their previous two records, but has traded that in for even more abstract, dream-like atmospheres that focus more on texture than melody. For those expecting more of Teen Dream and Bloom, this will take a bit of getting used to, but it isn’t long at all before repeated listens yield undeniably pretty and technically dazzling results. If it proves to be a stepping stone on the way to another phase of their career, then it will remain an interesting and compelling footnote in their catalogue. (8/10)