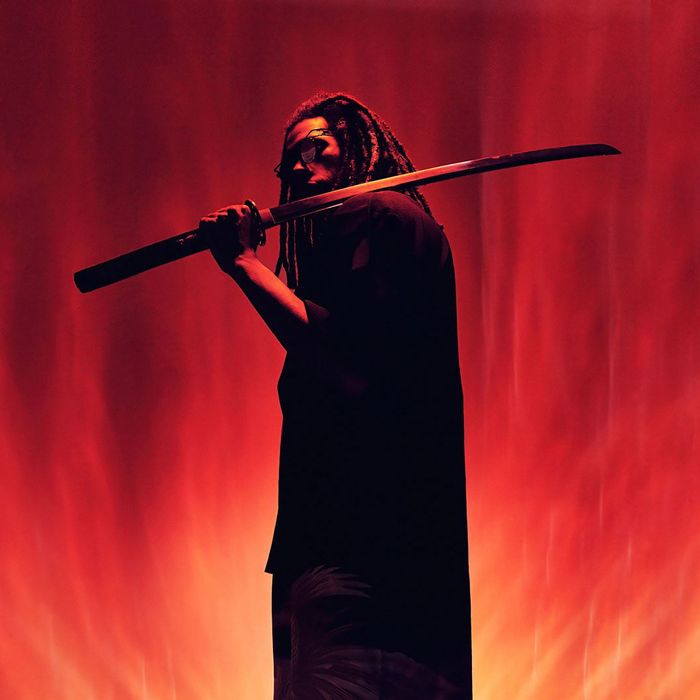 A seamless, dynamic blend of digital beats and electro-acoustic instrumentation, Steven Ellison’s soundtrack to Netflix anime ‘Yasuke’ is near flawless.

A cultural omnivore in his dazzling output as Flying Lotus, it’s hardly surprising to discover that Steven Ellison is a fan of anime. Taking an executive production role on the new, six-part Netflix anime series Yasuke as well as providing its soundtrack, he’s teamed up with creator LeSean Thomas to tell the story of a Black samurai in 16th century feudal Japan. Established collaborators in the form of Thundercat, Niki Randa and Denzel Curry pop up to augment his vision, but the authorial voice of Yasuke is very much Ellison’s. Therefore, not only is it a successful soundtrack work, in the sense of sonic world-building, but one that very much makes sense as a regular FlyLo studio album.

Throughout, there’s a constant interplay between tension and tranquility, between digital and acoustic instrumentation, reflecting the duality of the series’ metaphysical narrative and themes. There’s also a notable effort to steer clear of the long-established, RZA-driven method of soundtracking fight sequences with ‘hip-hop bangers’. Instead, we get orchestral swells underpinned by percussive onslaughts, seamless mixtures of digital beats, traditional African and Japanese drums and rapid fire hi-hats.

Beginning with the traditional Japanese instruments heard on ‘War At The Door’ and the head-nodding tempos of the series’ theme tune ‘Black Gold’, the latter bolstered by Thundercat’s playful falsetto, Ellison manages to capture the almost over-stylised emotions typical of many classic anime themes, but gives proceedings a twist that makes everything unmistakably FlyLo. Just over three quarters of an hour flies by in a perfectly paced sequence of moods and ambiences, the very best of which are the dynamics of ‘Fighting Without Honour’ that goes from frenetic to calm, the resplendent and triumphant ‘The Eyes Of Vengeance’ and the Latin fingerpicking and funk rhythms of ‘Crust’. Denzel Curry turns in a fantastic guest flow on ‘African Samurai’, while Niki Randa’s ethereal vocals lend ‘Hiding In The Shadows’ a lullaby quality.

Yasuke’s soundtrack is so integral to the series itself that it almost serves as its own character – each of these sonic miniatures, almost all between one and two minutes in length, underlines what’s going on in such eye-popping detail on the screen and makes it even more vivid. Psychedelic and immersive, Yasuke is another incredible addition to Steven Ellison’s diverse and near-flawless body of work as Flying Lotus. (9/10) (Ed Biggs)

Listen to Yasuke by Flying Lotus here via Spotify, and tell us what you think below!