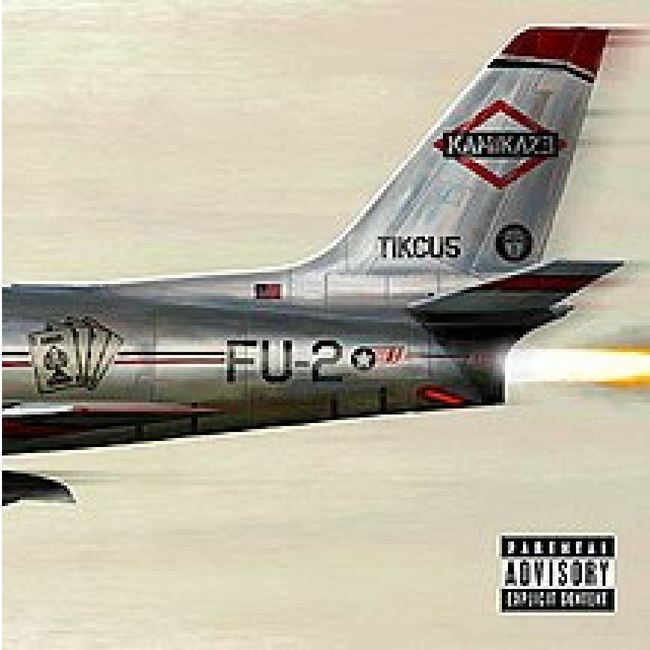 Intended as a reaction to the tepid reception to last year’s ‘Revival’, Eminem’s surprise new album ‘Kamikaze’ still finds him miles off his best form.

“But last week, an ex-fan mailed me a copy of The Mathers LP to tell me to study”, “That line in the sand, was it even worth it?” and “I’m watchin’ my fanbase shrink to thirds” are lines taken from the opening track ‘The Ringer’ off of Eminem’s new surprise release Kamikaze, which has been released so soon after his previous album Revival – an album that was arguably his worst to date, and seemed to have permanently damaged his reputation and status. A few months prior, the Michigan-born rapper’s BET anti-Trump freestyle alienated his white, working-class male audience by making them choose between him and “Agent Orange”. But judging from the cited lyrics, it seems Eminem is speaking directly to what’s left of his audience in a state of total self-awareness and is trying to recapture the spirit of his heyday, when he was a counter-cultural icon.

Eminem’s albums post-2002 received mostly negative criticism, whether it be 2009’s Relapse or 2010’s Recovery, accusing him of engaging too much in pop music sensibilities. It’s gotten to the point where any attempt made by Eminem to rejuvenate the early noughties is undermined and too little, too late; but that doesn’t stop him from trying on Kamikaze: an album that clocks in at just 45 minutes which is short by his standards.

‘The Ringer’ is full to the brim with neat flows and rhymes with differing syllabic techniques all backed up by a simplistic and textbook beat. The listener can sense Eminem’s long-lost edginess finally returning after well over a decade. Not only is Eminem reflecting on the events of yesteryear but once again criticises the current hip-hop scene with “What the fuck is half the shit is that you’re listenin’ to / Do you have any idea how much I hate this choppy flow”. He takes a stab at artists like Lil Xan and Lil Pump for just copying Lil Wayne’s style and “I should aim at everyone in the game, pick a name” suggests that he can outdo the myriad artists populating hip-hop now. Plus, Eminem revisits his beef with Machine Gun Kelly on ‘Not Alike’ when Kelly tweeted about his daughter Hailie back in 2012 and slyly dissed him on a Tech n9ne collaboration titled ‘No Reason’.

He capitalises on this notion as his pace quickens on ‘Greatest’, where Eminem compares his rapping ability to Muhammed Ali’s boxing: a figure who Eminem has openly admired, like so many. He further criticises the genre on the song ‘Fall’, Eminem has received backlash, yet again, for his criticism of Tyler, The Creator using a homophobic slur when Tyler seemingly came out as gay on his latest album Flower Boy. Musically, the auto-tuned choruses from Justin Vernon are simply unnecessary, unfriendly on the ears and add no meaningful substance to the song. In fact, the second half of the album lacks focus overall with ‘Nice Guy’ and ‘Good Guy’ featuring Jessie Reyez being the duds of Kamikaze. The closing track ‘Venom’, for the upcoming Marvel film of the same name starring Tom Hardy as Eddie Brock, is oozing with booming bass and atmospherics required for a supervillain film.

One of Kamikaze’s shining aspects is the reintroduction of a “Paul” telephone call skit, that hasn’t been featured since The Marshall Mathers LP, from Eminem’s long-time manager Paul Rosenberg where he asks the question “Um, are you really gonna just reply to everybody who you don’t like what they have to say, uh, about you or the stuff you’re working on?”. For comedic effect, Rosenberg also asks “What’s next? Kamikaze 2, the album where you reply to everybody who didn’t like the album that you made replying to everybody who didn’t like the previous album?”

Kamikaze is superior to Revival, to state the obvious. But it would be a miracle if Eminem were to fully reinvigorate the ethos of his younger self in today’s hip-hop scene. If Kamikaze is the first step in the process, then he is a considerable distance from achieving that goal. (5/10) (Harry Beynon)

Listen to Kamikaze by Eminem here via Spotify, and tell us what you think below!