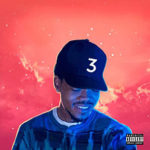 During ‘All We Got’, the first track on Coloring Book (thanks for the spelling America…) the follow-up to 2013’s vibrant Acid Rap exudes joy, Chance The Rapper boasts “Man I swear my life is perfect, I could merch it” and it’s easy to understand why. The past three years have seen Chicagoan Chancelor Bennett rise into the upper echelons of hip-hop’s stars and over the course of his new record we see Kanye West, Lil Wayne and Ty Dolla Sign to name few – and this rise has led to Coloring Book being something of a celebration for Chance as he reflects on his life.

The aforementioned ‘All We Got’ is an example of all of this; we can openly see the rise of Chance as he has gone from sampling his hometown hero, Kanye West, during the intro to Acid Rap to having him feature in a moment which mirrors the collaboration between the two during ‘Ultralight Beam’ on The Life Of Pablo. The gospel elements courtesy of the Chicago Children’s Choir provide a grandiose noise and when combined with the elements of bebop jazz and Chance’s typical ear for pop it serves a magnificent opener.

Coloring Book is an excellent blend of jazz, gospel, soul and hip-hop which has not been done to such success since Kendrick Lamar’s masterpiece To Pimp A Butterfly last year – and while not quite on that level Coloring Book remains an enthralling listen for its 58 minutes. ‘Summer Friends’ is a shining example of this as Chance makes statements on the crime in Chicago each summer, “Summer friends don’t stay”, while the beautiful blend of Justin Vernon-like vocal from Francis & The Lights and a techno beat which flourishes with the contrasting nature of the singing and the slacker-rap delivery from Chance.

The minimalistic ‘Blessings’ contrasts what we’ve heard previously as Chance continues the ongoing theme of praise to God as Jamila Wood sings to a minimal jazz beat “When the praises go up (good god) / The blessings come down”. The song also pokes fun at Donald Trump by referring to him as “Donnie Trumpet” – a clever double entendre on his own excellent collaboration with the jazz musician on Surf last May – and speaking of Jericho and the wall in reference to the republican’s campaign against Mexican immigration.

There are weaker moments on the record which stop Coloring Book from reaching truly great heights with ‘Mixtape’ being a generic effort into delivering a meatier sound with bass coming to the forefront of the record, but the strong message for the free form of music and the lack of label in music is one which becomes abundantly apparent. While later on in the record ‘All Night’ becomes the offering for the party as Chance’s attempt at hip-house falls slightly flat as the Latin-tinged drumming doesn’t connect.

Coloring Book remains at its best when things are kept calm and this is clear in the closing moments of the record, as it reverts back to its gospel moments. ‘How Great’ builds with elements of soul to delightful results. ‘Blessing (Reprise)’ closes the record, combining all the album’s lyrical elements of praise, thanks and reflecting which serves an introverted yet unmistakably big sound, and it ends Coloring Book on a huge high.

Coloring Book may have the odd missed opportunity, but on the whole, it is a remarkable record which should flood the album of the year charts in December. By combining jazz and gospel with his own unique style he has proven himself worthy of his meteoric rise and the success he has earned. Colouring Book may not be the finished article just yet, but at 23 years old the Windy City native is moving ever closer to releasing his masterpiece. (8/10)

Coloring Book is available to listen to via Apple Music but not Spotify, and you can hear it here. Tell us what you think below!