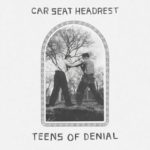 It’s taken six years and 14 home-recorded albums for Car Seat Headrest’s Will Toledo, a bedroom artist par extraordinaire, to finally step into a recording studio. Previously managing to turn a handful of heads with 2011’s Twin Fantasy, fans waiting patiently for Toledo’s studio scepticism to subside finally have something to cheer about with Teens Of Denial, the release of his first ever professionally produced studio album. The album follows up the well-received Teens Of Style from last year, and is already one of 2016’s most exciting prospects.

Artists writing albums based on the struggles of depression is certainly nothing new. Time after time we hear the familiar timid and subdued whines that make up the anxiety inspired anthems we have all eventually grown to hate. For a period, Car Seat Headrest may have been placed in this category, however Teens Of Denial silences its potential critics. Having ditched his usual lo-fi home studio recording techniques, Toledo has proved his poetic worth through the album’s 70 minutes of instantly memorable and topically diverse lyrics. “What happened to that chubby little kid who always smiled and loved The Beach Boys? / What happened is I killed that fucker and I took his name and got new glasses” gives a suitable indication to the kind of tone Teens Of Denial exposes to a listener.

What’s gained in lyrical terms is also certainly not lost in sound. Producer Steve Fisk is no stranger to the aggressive noise making capabilities in music. Having previously worked with Nirvana on their Blew EP, Fisk’s grunge-generating background entwines devastatingly well with Toledo’s often intricate and cataclysmic wall of distortion. Most notably, this is heard on third track, ‘Destroyed By Hippie Powers’ and eight minute thriller ‘Cosmic Hero’. Teens Of Denial has kicked Car Seat Headrest’s fear of studios right into the dust, and is one of 2016’s most engaging and consistently enthralling albums to date. (9/10)

Listen to Teens Of Denial here via Spotify, and tell us what you think below!