REVIEW: Bright Eyes – ‘Down In The Weeds, Where The World Once Was’ (Dead Oceans) 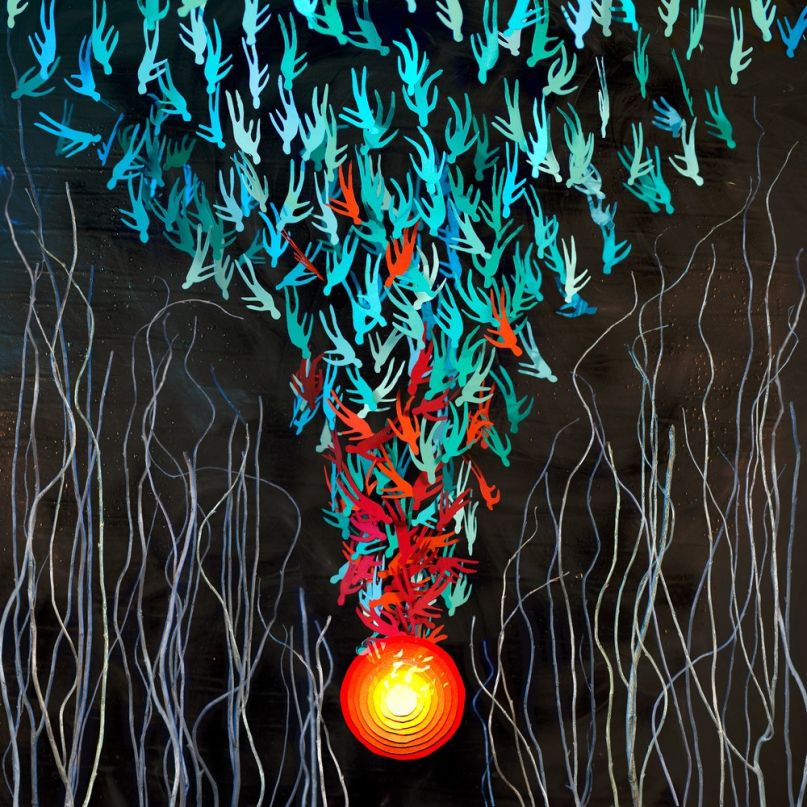 The first Bright Eyes album in nine years, ‘Down In The Weeds, Where The World Once Was’ is a consistent and direct display of Conor Oberst’s songwriting power.

Confession time: I’m coming from a different background than most other music reviewers when listening to the latest album from Bright Eyes. I wasn’t even on this earth when their classic debut album Fevers And Mirrors was released over two decades ago. Nor do I get the feeling of angsty teenage nostalgia that seems to run through the veins of many music-obsessed millennials on Twitter whenever I hear Conor Oberst’s various mumbles. Hell, I was barely old enough to find out who this band was when they went on hiatus earlier in the 2010s. It’s more likely for somebody my age to know Oberst from his work with Phoebe Bridgers as Better Oblivion Community Center, which, for me, is exactly the case. But with the miracle that is the internet, I made up for all those lost years by diving into the past Bright Eyes catalogue. They may not hold the same place in my heart that they did for many emotional former adolescents, but it’s easy to understand why they are so beloved.

So, whenever we get a comeback album from an artist, the big question is: what has changed? It’s been nine very long years since the group’s 2011 release The People’s Key. And although Oberst has stayed active with solo work (and, as stated earlier, a record as Better Oblivion Community Center), there’s always a possibility for his work to dip in quality. Thankfully though, Bright Eyes more than avoids total disappointment on Down In The Weeds, Where The World Once Was and delivers a release containing solid songwriting, dimensional production, and Conor Oberst being, well, Conor Oberst.

Let me start with what caught my attention at first, and that’s the fantastic layering of instruments on this record. On the first real tune we find on the album, ‘Dance And Sing’, we get an almost chamber pop-esque choir of strings and grand pianos fluttering behind a steady drum kit and some percussive shakers. Throughout the track we get subtle accent instrumentation popping in and out, such as banjos, echoey effects on the snare drums, and other intriguingly hard to pin down sounds. Another song that exhibits this is the single ‘Mariana Trench’. Synthesizer swells, shuffling hi-hats, and muted lead guitars all grace the verses, with an exciting bridge introducing horns before the final chorus hits. The dense recordings on this record have a spacey quality to them that, even in some dull songwriting moments, make the tracks captivating enough in auditory terms.

Speaking of which, let’s get down to the songs. To start, the highs don’t nearly reach some of the highs of past material. But the tracks are relatively consistent, and all feel like they’re written with an equal amount of passion. There’s a sharpness and to-the-point quality of the songs that make this fourteen-track, 55-minute long album breeze by without feeling like a slog. The best songs on Down In The Weeds… are the ones that use this sharpness, mostly in the chorus, to their advantage. Take ‘Tilt-A-Whirl’ for example. It’s the shortest track of the record, but it’s catchy, raw, and feels complete. Other tracks such as ‘Mariana Trench’, ‘Forced Convalescence’, and ‘One And Done’ achieve the same thing. Directness is the key to the best tracks here.

Obviously, Bright Eyes’ signature is their famed frontperson’s poetry. On this record, we get a healthy dose of darkness and sadness. It really wouldn’t be an Oberst record without it. It isn’t quite as prominent on Down In The Weeds… compared to other records, but it’s still there. ‘Hot Car In The Sun’ is just one example, and although being the most sparse and underwhelming track dynamically, it’s probably the most emotionally riveting. It poignantly examines the mundane tasks in everyday life coinciding with his feelings of pain. Another standout when it comes to moving Oberst lyricism happens on ‘To Death’s Heart (In Three Parts)’. As the title suggests, there are three lyrical vignettes, each utilizing a different non-English word in their chorus. Along with lines like, “Agonies are infinite and sympathies just aren’t; they run out”, it shows itself to be one of the most heartbreaking songs here.

Down In The Weeds, Where The World Once Was serves as a fulfilling comeback for Conor Oberst’s most famous musical vehicle. It includes many of the band’s signature elements, though not as realized as in prior material. It would be fantastic to see Bright Eyes push themselves into less comfortable territory, or at least go bolder with what makes them unique. But for now, this new record will satisfy any fans who’ve been eagerly waiting this near decade-long break. (7/10) (Andy Ciardella)

Listen to Down In The Weeds, Where The World Once Was by Bright Eyes here via Spotify, and tell us what you think below!

Tags: album, Bright Eyes, Conor Oberst, dead oceans, Down In The Weeds Where The World Once Was, Mike Mogis, Nate Walcott, review