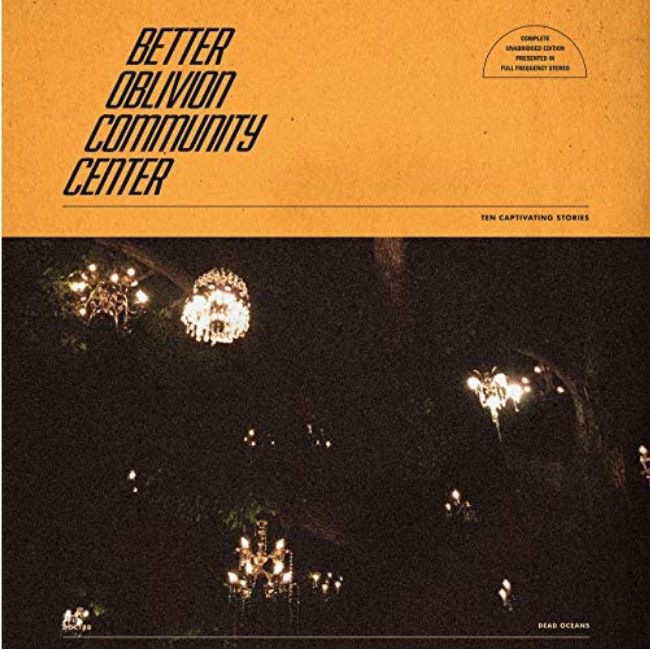 The curiously titled Better Oblivion Community Center is a collaboration between two symbols of different generations of American indie songwriters, namely the industrious and prodigiously talented Phoebe Bridgers and veteran Bright Eyes frontman Conor Oberst. The two did a great job at generating a buzz around this – unlike Bridgers’ recent three-fold collaboration project boygenius with Julien Baker and Lucy Dacus that was trailed months in advance, Better Oblivion Community Center was released with very little notice at all. A mysterious telephone hotline and a handful of invented brochures advertising a fictitious dystopian wellness center made themselves known this week, the duo performed ‘Dylan Thomas’ on Colbert’s ‘The Late Show’ on Wednesday, and the album itself dropped the next day.

Oberst, in the third decade of his career, has been a trailblazer and inspiration for exactly the kind of honest, immediate and soul-bearing music of which Bridgers is now in the vanguard in 2019. But Better Oblivion Community Center is a lot more collegiate than that description makes out. It isn’t some mawkish passing of the torch or master-apprentice showcase, but more a mutual exploration of shared passions, and works the same kind of effortless charm as Courtney Barnett and Kurt Vile’s Lotta Sea Lice.

The lyrics are literate and conservational, as you’d expect given their respective repertoires, but what’s striking is just how many sounds and textures their sound spans, yet the whole remains coherent. Of course, they’ve already worked together on the touching ballad ‘Would You Rather’ on Bridgers’ 2017 debut Stranger In The Alps, so there’s some previous here, but it’s the diverse patchwork that wins through and makes Better Oblivion Community Center memorable. Oberst’s croaking, brooding introspections and self-lacerating regrets dovetail neatly with Bridgers’ sweeter, wanderlust observations, and together they forge a modern and charming slant on the melodic bleakness of the Seventies’ Laurel Canyon sound.

‘Exception To The Rule’ is reminiscent of Oberst’s 2005 Bright Eyes outlier Digital Ash In A Digital Urn; the ruminative opener ‘Didn’t Know What I Was In For’ and the lovely ‘Service Road’ play more to Bridgers’ strengths as gentle acoustic numbers. The stoner-rock lope of ‘Big Black Heart’ is the most left-field moment alongside the juddering tempo changes of ‘Sleepwalkin’’, while the rollicking rocker ‘Dylan Thomas’, with shades of political anger, and the road-trip ‘My City’ that features a mid-paced, rambling riff show that the duo can turn up the volume when required. It’s on more makeweight tracks like the forgettable ‘Forest Lawn’ that this collaboration feels occasionally phoned-in, but there’s more than enough delicate highlights like ‘Chesapeake’, where Oberst and Bridgers dive into mutual memories of gig-going with lyrics like “we were the tallest person watching in Chesapeake / you put me on your shoulders so I could see”.

If the most rewarding albums are often the ones that we didn’t know we needed, then Conor Oberst and Phoebe Bridgers have done the world a service. Better Oblivion Community Center absolutely lives up to its billing in pure songwriting terms, with character and mood studies aplenty, but its when the two explore strange sonic territory together that it truly comes alive. (7/10) (Ed Biggs)