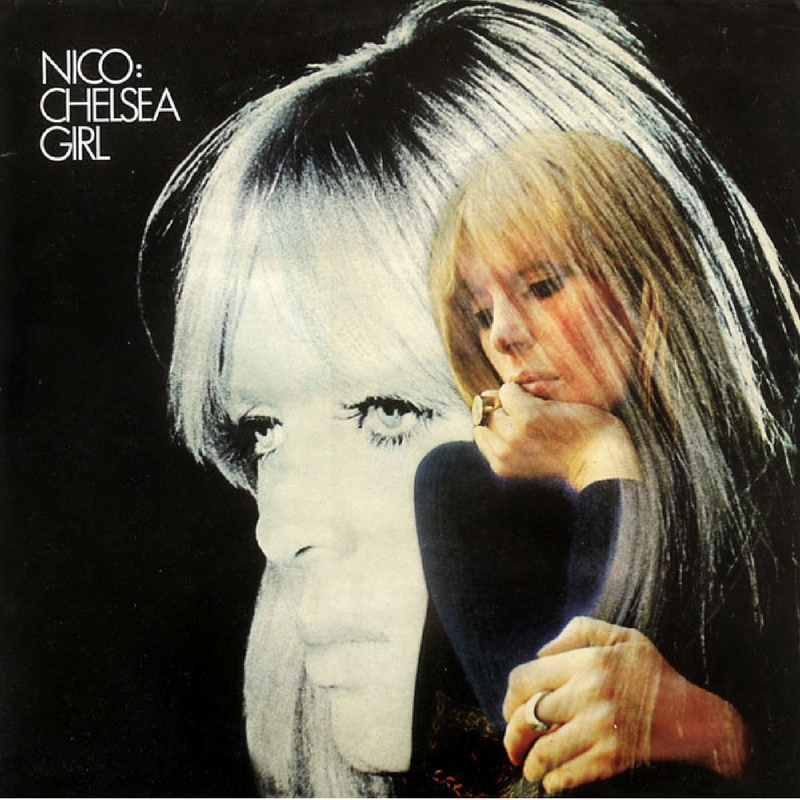 The story of Nico is a paradoxical one. She’s among the most influential women in 20th century popular music, yet her influence has almost always gone unseen or underappreciated. Her music has done more than most to help women get taken seriously in the music industry, yet her most famous work sees her playing second fiddle to The Velvet Underground on their iconic Andy Warhol-banana artwork debut album. For a very long time she was more well-known for the male rock stars she dated (Jim Morrison, Brian Jones, Iggy Pop) rather than her own accomplishments, unfairly pegged as a footnote to a male-dominated history of the age.

It’s only really since the turn of the millennium that Nico has begun to be more widely rediscovered, and that process began with a gradual reappraisal of her 1967 solo debut album, Chelsea Girl. Full of understated yet expressive art-rock paeans and string-laden chamber-folk, that owed as much to European art movements as to American musical traditions and contemporary ‘60s pop, its sepia-tinged ambience has inspired generations of female musicians and artists for five decades since its release.

Born Christa Päffgen in 1938 in Cologne, Nico suffered the loss of her father at a young age in the Second World War, after which the family relocated to Berlin. With her striking, statuesque appearance, she was picked up as a model as a teenager, moving to Paris and then to New York City over the coming years. As the ‘50s turned into the ‘60s, she began to land film roles and commenced a singing career in late 1963, performing adaptations of jazz standards like ‘My Funny Valentine’. She also gave birth to a son, rumoured to have been fathered by actor Alain Delon (whose own small part in music history sees him appear on the front cover of The Smiths’ classic 1986 album The Queen Is Dead).

After releasing one single, Nico was introduced by Brian Jones to Andy Warhol’s Factory scene in New York in 1965, a circle of distinguished intellectuals, playwrights, Bohemian street people, Hollywood celebs and musicians that formed the hub of the city’s cultural scene. She starred in a handful of films in 1966, including Chelsea Girls, a film about New York’s infamous Hotel Chelsea and which would inspire her debut album’s name the following year.

Warhol then persuaded The Velvet Underground, the central part of his Exploding Plastic Inevitable multimedia revue, to have Nico join the band as a ‘chanteuse’. The two elements sparked off each other beautifully, with Nico taking lead vocals on three tracks from The Velvets’ iconic 1967 album The Velvet Underground & Nico (‘Femme Fatale’, ‘All Tomorrow’s Parties’ and ‘I’ll Be Your Mirror’).

After that album’s release, Nico commenced work as a solo artist once again, this time accompanied in her live performances by a revolving cast of guitarists, including members of The Velvet Underground, Tim Buckley, Tim Hardin and her current boyfriend, a then-teenaged Jackson Browne. It was this basic set-up that would inform Chelsea Girl, recorded in April and May 1967, as the back-up musicians provided the songs for Nico to sing.

Despite the non-originality of the content in the purely songwriting aspect, Chelsea Girl is a spellbinding and influential collection that has had a huge impact on generations of subsequent female artists, and that is because Nico was a charismatic presence on record, and a natural star. The jarring effect caused by such uncompromised honesty and soul-baring, delivered in Nico’s bleak, deaths’-head intonations, is the central dynamic that makes the album such a compelling experience. Her voice is remarkably versatile throughout, suiting the lilting, autumnal guitar textures of the Jackson Browne-penned numbers and also the more art-rock informed songs written by the non-rhythmical sections of The Velvet Underground, Lou Reed and John Cale.

Browne’s ‘The Fairest Of The Seasons’ opens the ten-track collection, an absolutely spectral song that perfectly embodies the feeling of walking in the cool weather of autumn, leaves falling around you. The following ‘These Days’ is another gorgeous Browne-penned paean, and arguably the most immediately arresting and famous track on Chelsea Girl. A tale of loss and regret, of experiences past and never had, yet remaining undefined throughout that makes it universally relatable. Nico’s resigned, philosophical voice makes Browne’s sullen-spirited, gently picked acoustic song come to life, although the distinctive strings were added later.

Chelsea Girl then gently changes tone and tenor, moving away from string-based chamber-folk to something darker and more in thrall to The Velvet Underground’s avant-garde leanings. Cale and Reed’s ‘Little Sister’, with its staccato strings and gentle waltz rhythm, and Cale’s ‘Winter Song’ both see Nico’s voice begin to play a more prominent role, standing out from the arrangements rather than merely being a part of the whole.

The eight-minute sprawl of ‘It Was A Pleasure Then’, the only writing credit Nico has on Chelsea Girl alongside Reed and Cale, closes the first side of the record. Musically, it’s the album’s greatest outlier, a scratchy, atonal but quiet and non-intrusive meditation amid a record of sumptuous arrangements.

Much more epic and fully realised is ‘Chelsea Girls’, a song about the same N.Y. hotel that inspired Warhol’s film the previous year, in which she herself had starred. Telling a story of the various drugged-up celebrity inhabitants, in a similar manner to Lou Reed’s New York scenester tale ‘Walk On The Wild Side’ five years later, it’s a brilliant snapshot of a time and place. With flourishes of strings and a nagging flute motif, Nico’s flat voice provides the perfect narrative foil for Reed and Sterling Morrison’s tale of misfits and unique personalities.

Donated by Bob Dylan, ‘I’ll Keep It With Mine’ is so far away from his blues and rock roots that it’s almost unrecognisable, and is perhaps the greatest illustration of Nico’s abilities as an interpreter of other people’s work, and the potential she had. She intones it almost like it’s some ancient German folk song, rather than a 20th century piece.

The album emerges back into the light in its final three songs, with Browne’s final song ‘Somewhere There’s A Feather’ providing another piece of ‘60s folk-pop beauty before Lou Reed’s self-penned pre-Velvet Underground track ‘Wrap Your Troubles In Dreams’ arrives. It’s by far and away the most melodic of his earliest material, and Nico again gives it great treatment with her sad, detached vocal performance. Tim Hardin’s only contribution, ‘Eulogy To Lenny Bruce’, provides Chelsea Girl with a low-key finish that feels entirely appropriate.

All the while, Nico’s minor-key contralto remains distinctively flat, counteracting the sparkling and glorious melodies that her songwriters provided for her, providing proceedings with a discomfiting sense of baroque elegance. It’s this ‘sad girl’ thing, the feeling that you’re listening to a lost soul about her dashed hopes and eternal longings, that helped to inform so much of what became the goth scene more than a decade later.

By all accounts, Nico herself had very little creative control of the recording process for Chelsea Girl. Producer Tom Wilson was responsible for a great many of the string and flute arrangements that adorned many of the tracks, something that Nico herself had no knowledge of at the time and which were added after her vocal contributions had been finished.

Nico said in 1981 about the album: “I still cannot listen to it, because everything I wanted for that record, they took it away. I asked for drums, they said no. I asked for more guitars, they said no. And I asked for simplicity, and they covered it in flutes!… They added strings, and— I didn’t like them, but I could live with them. But the flute! The first time I heard the album, I cried and it was all because of the flute.”

Nico also had to put up with a fair amount of professional ridicule and belittlement around this time. She was deaf in one ear, which caused her to occasionally veer off-key while singing live. The more research one does into the recording process, the more it reads as a case of female creative input being casually sidelined or worse, and determined by a male-dominated process – something that seems difficult to imagine fifty years later in 2017, or at least in such a routine and egregious manner.

In 1967, the year of the Summer of Love and the height of flower-power, the listening public was unprepared for Nico’s music, the experimental art-rock masterpieces and autumnal, melancholic suites that Chelsea Girl offered. Commercially speaking, it barely registered. However, just like Nico’s other 1967 album with The Velvet Underground, its influence is vastly disproportionate to its raw album sales.

The desolate beauty of the album’s VU-penned numbers has enraptured artists like Patti Smith, the High Punk Priestess of American punk, and her British counterpart Siouxsie Sioux, who even offered her a support slot on some of her first tours. Portishead’s Beth Gibbons and indie icon Cat Power both owe her a great deal of gratitude in terms of their performance artistry, while in the 21st century, artists like St. Vincent, Sharon Van Etten and Angel Olsen continue to draw inspiration from Nico.

More widely, Chelsea Girls became widely rediscovered when its opening two tracks, ‘The Fairest Of The Seasons’ and ‘These Days’, were used by director Wes Anderson on his 2001 film The Royal Tenenbaums. Since then, it has gone from being regarded as a strictly cult affair to an increasingly fondly regarded ‘60s classic, albeit one that was unfairly overlooked. While some have always talked it down as an interesting but superfluous counterpart to The Velvet Underground & Nico, largely because its creative genus came from Reed and Cale, that view completely unfairly disregards its unique charms.

As for Nico herself, her next album The Marble Index, released in 1968, saw her lash out at the sense of creative suffocation she experienced with Chelsea Girl, producing an alarming volte-face with some pretty frightening lyrics and avant-garde instrumentation. That album was followed by 1970’s Desertshore and 1974’s The End…, forming a loose trilogy of similar works that went on to inform the gothic and post-punk movements later in the Seventies. Only two more records followed in her lifetime, as she struggled on and off with heroin addiction for the best part of 15 years until the early 1980s, by which time she had settled in Manchester.

Nico died in July 1988 at the age of 50, following a cycling accident while holidaying in Ibiza with her son Ari, hitting her head and succumbing to a fatal cerebral haemorrhage. Her grave in Berlin has long been a tourist attraction for indie music fans around the world, and her status as an art-rock icon is secure, with many emerging artists in the last ten years recognising her influence. That status is, in large part but not exclusively, bound up with Chelsea Girl.

Listen to Chelsea Girl by Nico here via Spotify, and tell us what you think below!